Maps of cities and regions of Hungary 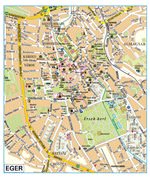 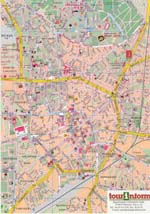 Interactive maps of hiking and biking routes in Hungary

1. You can zoom in/out using your mouse wheel, as well as move the map of Hungary with your mouse.
2. This interactive map presents two modes: 'Biking Routes' and 'Hiking Routes'. Use the '+' button on the map to switch between them.


Railway and landscape maps of Hungary

This Hungary map has two modes: 'Railway Network' and 'Landscape & Rural Map'. Use the '+' button on the map to navigate.

Maps of cities and regions of Hungary

Budapest
Matthias Church. Matthias Church is one of the symbols of Budapest. The church has got its name from King Matthias, who married there two times. This church has a long and exciting story. For example, it was the place of coronation of many kings. This building itself is a good example of the European eclecticism - it harmonically unites different architectural styles. The tower and the colorful roof of the church can be seen even from the other bank of the Danube. Matthias Church was restored … Read more

Eger
Eger is an old and charming city in Hungary. The second-largest city in Northern Hungary is famous for its baths with thermal water that is globally recognized for its healing properties. Besides various treatments, the city attracts travelers with its gorgeous architectural heritage, rich history, and, of course, varieties of wine that are not present in other wine regions. Due to the convenient location, it is not hard to travel to this city because it lies one hundred forty kilometers from … Read more

Pecs
Some places in the world are very hard to abandon. You want to visit them again and again. The enchanting city of Pecs in Hungary is one of such settlements. There is a tradition of throwing a coin in the fountain or touching a sculpture before leaving in order to return to the place that you like again. In Pecs, this tradition is slightly different – tourists hang locks and throw the keys as far as they can so no one can find them. There is a simple explanation for such an appeal to this … Read more

Gyor
Among Hungarian cities with a big number of developed industries and modern factories, Gyor occupies the third place. Besides that, tourism has been actively developing in the city. Thanks to the rich cultural and historical heritage, this Hungarian city is widely famous among numerous tourists. Gyor is often referred to as the “river city” because it is situated on the bank of the River Rab. When visiting this beautiful Hungarian city, many tourists prefer to make a river excursion in a … Read more

Miskolc
The gorgeous Hungarian city of Miskolc lies east from the Bukk Mountains. Many tourists around the world know Miskolc as a beautiful historical center with multiple Baroque style buildings. This city is incredibly rich in architectural landmarks. Together with the natural attractions of the region, these landmarks create an inimitable atmosphere and heritage of the Hungarian city. Multiple tourists visit this part of the country to visit the treasure of Miskolc – the resort with the same name … Read more

Kecskemet
The Hungarian city of Kecskemet is situated in the heart of the Hungarian Valley. This settlement has become internationally acclaimed because of its maiolica, various ornaments, and apricot vodka. Tourists from all over the world come here to see attractive buildings of the 19th and 20th centuries, visit an interesting museum of naive art, admire exhibits in the museum of photography, and walk in the arboretum at the outskirts of the city. In the past, there was an ancient settlement on the … Read more

Esztergom
An adventure to Esztergom, the cradle of modern Hungary, promises to be unforgettable because all buildings and historical monuments tell much interesting about the old and rich history of this region. Esztergom is situated not far from the border with Slovakia and 46 kilometers away from Budapest. The city lies on the right bank of the River Danube, exactly in the area where the river bends. Nowadays, Esztergom is widely referred to as the “Hungarian Vatican” because the biggest church in … Read more

Debrecen
A great place for walking will be Market Street. It begins near the railway station and comes to an end at Kalvin Square. Back in the 19th century, the cattle market was located on this street, and today it attracts tourists with a variety of historical buildings built in different periods. In summer, a handicraft market works on this street. It can be visited on weekends. The square itself is of considerable interest. Interesting entertaining events are held on it, on holidays. The Most … Read more