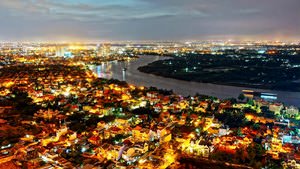 Ho Chi Minh City is the largest metropolis in Vietnam, the largest industrial and economic center of the country, which received its present name in honour of the first President. Its population is about 8 million people. The number of located on its territory enterprises has exceeded 300 000. Its present name the city got in 1976. Before it was called Saigon. It is noteworthy that the new name of the city is used only for official purposes, and the native inhabitants still call it Saigon.
Top hotels in Ho Chi Minh City for business trip or short vacation
Ho Chi Minh City offers a selection of hotels of different categories. Here discerning travelers and budget travelers can enjoy their vacation. In the lively heart of the city, near the …

Open
Despite the status of a major industrial city, Ho Chi Minh City does not lose attractiveness among tourists. Its tourist infrastructure is well-developed. Foreign guests will surely love the cultural life of the city, its various shopping and entertainment complexes. One of the main distinguishing features of Ho Chi Minh City is a vibrant and rich rhythm of life. Here it will be extremely difficult to find a secluded and quiet street. Every boulevard is sure to have a colorful market, a colorful series of shopping pavilions, cozy cafes with terraces or one of the ultra-modern hotels.
Active travelers and adherents of event tourism will like to relax here. To plunge into the unique atmosphere of the city, it is just enough to leave a hotel. One of the most popular and busiest places is the Ben Thanh Market

. Locals come here to meet their friends and relatives, buy their favorite food or spend the evening in a cozy café enjoying classic national dishes. But it this place may seem to tourists like a really exotic place. Here you can buy a lot of original goods, from the rarest medicinal products and national costumes to the original craft and national delicacies. It is also worth noting that near the market Ben Thanh there is a popular hotel. Many experienced travelers choose this district for accommodation. Copyright www.orangesmile.com
Excursion over cultural sights of Ho Chi Minh City - 'must visit' points of interest
A number of historical monuments in Ho Chi Minh City are not as great as in the capital of the state. However, each of them deserves the attention of modern travelers. In the city center, in …

Open
Among the distinguishing features of the city there is the abundance of electronics stores that can be found literally at every step. This fact will certainly please tourists who prefer to buy the new state of the art gadgets from their holiday. Ho Chi Minh City is the best place in the country for such kind of shopping. 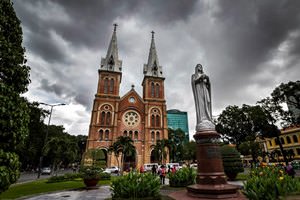 Attentive tourists will notice the features of the local transport device. Without any doubt, the national transport can be called miniature scooters. They are the perfect means of transportation in the conditions of a bustling metropolis. Students and respectable businessmen, even elderly people prefer to ride motor scooters. However, there are still many cars on the roads.
Your active city break in Ho Chi Minh City. Attractions, recreation and entertainment - best places to spend your day and night here
The variety of entertainment options in Ho Chi Minh City is no less worthy than the choice of interesting attractions. Despite the fact that there are no available for holiday beaches in the …

Open
The tourists who prefer to use a personal vehicle during their vacation should consider that locals can’t be called disciplined drivers. Many rules on the road are only conditionally followed. So, it would better for inexperienced drivers go on a public transport. Those who decide to rent a scooter don't need to look for specialized centers of the lease. You just need to drop at any nearby café or shop in. No doubt, a vehicle will be provided to the client in the shortest possible time because this service is prevalent literally everywhere. It seems that in a large and vibrant metropolis everything id for maintaining an active lifestyle. Surprisingly, in such circumstances, Ho Chi Minh City is saving its historic charm for many years. 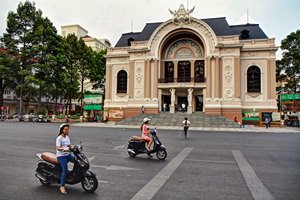 Many excursions in Ho Chi Minh City start from a visit to the Reunification Palace. The gorgeous palace was built at the end of the 19th century by local colonizers. In 1963, the historic landmark suffered much damage during the bombing, but later it became possible to recover it. The center of the city is the location of picturesque Paris Square that has a notable landmark nearby – Notre Dame Cathedral. This church is also an important landmark of the colonial period. The building of the cathedral was finished in 1880. For more than a century, it has been one of the most inimitable landmarks from an architectural point of view.
Top hotels in Ho Chi Minh City for business trip or short vacation
Ho Chi Minh City offers a selection of hotels of different categories. Here discerning travelers and budget travelers can enjoy their vacation. In the lively heart of the city, near the …

Open
In Ho Chi Minh City, tourists will see many gorgeous temples and pagodas, and Emperor Jade Pagoda is definitely one of the most unusual. It was constructed in honor of Ngoc Hoang, a Taoist god. The entrance to this temple is absolutely free for everyone. A giant statue of the god is the main decoration of the inner design. There is an interesting landmark that dates back to the war period in the outskirts of the city. These are the tunnels of Củ Chi. They were constructed during the partisan war period. It is a true underground town. The total length of all tunnels is more than 200 kilometers. Many elements of the original town have been reconstructed, so nowadays visitors can see warehouses, living premises, kitchens, a hospital, and other important facilities.

This guide to iconic landmarks and sights of Ho Chi Minh City is protected by the copyright law. You can re-publish this content with mandatory attribution: direct and active hyperlink to www.orangesmile.com.
Ho Chi Minh City - guide chapters 1 2 3 4

National and city parks around Ho Chi Minh City
♥   National Park 'Phuoc Binh' , 4 km from the center. On the map 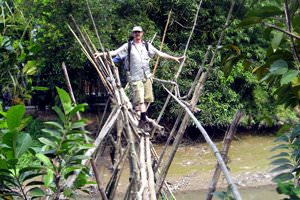 Distance from Ho Chi Minh City center - 78.7 km.
These constructions are built by local residents. As bridges are rather fragile, they are constantly being destroyed and have to be rebuilt. There are short and long ones, quite high and low among monkey bridges; the only peculiar form of these fragile structures remains unchanged. The rickety bridge may collapse at any time; it is necessary to wear the most comfortable shoes with rubber soles, otherwise thin bamboo stalks can easily slip. Despite the fact that bridges are used to cross the shallow river, the prospect of swimming in the murky waters doesn’t appeal to travelers, but it certainly adds excitement. … Read further

Phnom Penh
Since its founding, the settlement has had a beneficial strategic position. In its territory, there is the junction of three rivers – Bassac, Mekong and Tonle Sap. At the beginning of the 15th century, the king of Cambodia decided to establish a new capital and chose Phnom Penh. According to available data, Phnom Penh gained an official city status in 1432 and had been a ... Open »
Phu Quoc Island
The largest island in Vietnam situated in the Gulf of Siam is widely known as popular beach recreation and eco-tourism spot. Main features of Phu Quoc are nature landmarks and amazing coastline, which attract thousands of travelers. Despite its popularity and well-developed infrastructure, Phu Quoc has fairly quiet and harmonious atmosphere. The island is an excellent choice ... Open »
Nha Trang
Po Nagar towers are one of the most outstanding landmarks of Nha Trang. These Cham towers were built in the period from the 7th until the 12th century. Initially, there were eight towers, but only four of them have survived to this day. All these towers are dedicated to Yan Po Nagar, the goddess of the country and the patroness of the city. Vietnamese Chinese people and ... Open »
Siem Reap
Near shining modern skyscrapers, you can see typical monuments of Khmer architecture in the streets and they are just some of the multiple peculiarities of the colorful Cambodian city. For many years, it had been a colony of France, which influence is reflected in modern culture. So, in different popular restaurants and cafes, the visitors can order classic French dinner, ... Open »
Ko Chang
One of the main attractions of the island is Klong Plu waterfall, where anyone can swim. It is a true paradise surrounded by rich tropical forests. The silence is broken only by the sound of the waterfall and birds singing. Divers have long chosen the southern part of the island; there you can appreciate the diversity of the underwater world and enjoy fabulous sea views. There ... Open »
Hue
A conditional boundary between the old and the new part of Hue is the Perfume River - another amazing symbol of the city. The name of the river wasn't chosen by chance. The thing is that an incredible amount of fragrant flowers has been growing on its banks since ancient times. The city has managed to preserve its original charm and national flavor in the course of its long ... Open »

All about Ho Chi Minh City, Vietnam - sightseeings, attractions, touristic spots, architecture, history, culture and cuisine. Prepare your trip together with OrangeSmile.com - find out the 'must see' things in Ho Chi Minh City, which places to visit, which excursions to take, where the breathtaking views are waiting for you. Planning your trip with this travel guide will help your to get the most out of Ho Chi Minh City in few days.