Family holidays with children in Estonia - attractions and entertainment 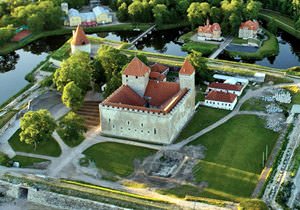 Tourists from all over the world come to Estonia with their children because the unique climate of the country has a healing effect on young ones. For children of different ages, there is a variety of entertainment and interesting places to visit in Estonia. Estonian zoos, amusement parks, water parks and other entertainment centers offer a lot of fun to both children and adults. The largest zoo in Estonia is the Tallinn Zoo. It contains animals from all over the world. On the territory of the zoo there is an Adventure Park in which children between the ages of two and seven years can have fun. There are several ostrich farms on the island of Muhu; two of which are located near Paralepa and Adavere. At Ranna’s ranch, children can watch domestic animals and birds.
National cuisine of Estonia - specialties, recipes and restaurants
The national cuisine of Estonia is not distinguished by its variety or delicacies as Estonians are already accustomed to eating delicious and …
Read further
Estonian water parks are located on the territory of hotels. The most famous of them is the water park “Tervise Paradiis” in Pärnu. Here you will come across swimming pools, Jacuzzis, artificial waterfalls and baths. The water slides of the aqua park are designed for both the younger and the older children. The longest of them is 85 meters in length. In the park there is a “black hill” equipped with spectacular visual effects. The Water Park “Aqva” in Rakvere is a huge swimming pool with six paths and attractions among which are; a wave pool, slides, a Jacuzzi and an outdoor pool. The windows of the water park overlook a picturesque park with weeping willows, which creates a feeling of swimming in the fresh air. Also popular among tourists with children is the water park “Aura” in Tartu, the spa hotel “Rüütli” on the island of Saaremaa and the Tallinn “Kalev Spa”.
Children will definitely like the “Vembu-Tembumaa” amusement park in Tallinn, where young visitors are welcomed with carousels, kart racing, trampolines, adventure trails, quad biking or rides on electric cars, “the Fairy Kingdom”, a slot machine, water attractions and many other entertainments. In the city of Tartu there is a Toy Museum with a rich collection of antique playthings for children. For the youngest visitors, a game room is open in the museum where they can spend time playing games and socializing with peers. Curious children should visit the scientific and entertainment center “AHHAA”, where they will enjoy the passage of the mirror labyrinth and visit the tower of Baron Munchausen. Copyright www.orangesmile.com
National traditions and mentality of people in Estonia
Estonian culture originated in a peasant environment. This gave it a special flavor expressed in distinctive traditions. Consequently, marriage in …
Read further
The fabulous Canterville Castle is widely known in the village of Pikajarve, around which there is a themed entertainment park where you can get acquainted with the clothes, means of transportation and cuisines of past centuries. In the gaming area, there is a wardrobe room in which young dandies can try on old clothes. Near Võrumaa is the Pokuland, an entertainment center created on the basis of the works of the Estonian writer Edgar Valter. Here children will get acquainted with the “pokus” – grass mounds that grow in bogs which will help them learn more about nature. In the town of Uue-Antsla there is the Traffic City, a unique center designed to teach children the rules of the road. It has real streets, intersections and pedestrian crossings, traffic signs and traffic lights. Children can ride on the roads of Traffic City on small accumulator cars and even fill them up at a gas station. 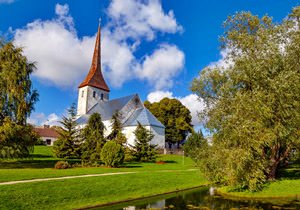 There is the Lotte Village in the region of Pärnumaa, which is familiar to young Estonians from cartoon. Here you can visit the adventure park, get acquainted with the cartoons characters from Lotte, go through the labyrinths, visit the planetarium, play extraordinary musical instruments, and learn how to make crafts in fascinating master classes. The optimal option for accommodation with children in Estonia are four or five-star hotels, spa hotels and resorts. On their territory you will come across playgrounds, children’s centers and swimming pools. If necessary, hotels provide services of animators and babysitters. They also have restaurants that offer a wide selection of children dishes.

This article about vactions in Estonia with children is protected by the copyright law. You can re-use the content, but only under the condition of placement of an active link to www.orangesmile.com.
Estonia guide chapters 1 2 3 4 5 6 7 8 9 10 11

Top cities of Estonia for children

Tallinn
Rocca Al Mare or Estonian Open Air Museum is incredibly popular with families. It’s nothing but an authentic Estonian village with charming wooden houses. This is the place where visitors can walk in the miniature village, look at historic houses, and enter old school and church. All buildings have the original atmosphere preserved, so visitors will be able to see how people lived centuries ago. Every day, special master classes take place in the village. During these exciting events, guests … Read more

Narva
Wonderful Narva waterfalls flowing right on the border with the Russian Federation will impress any tourist. The sight is exceptionally beautiful, however, the waterfalls can only be seen when the floods come. The Narva Hydroelectric Station "creates" the waterfalls artificially. You can find its building near the water tower where you can enjoy the most stunning views of the waterfalls and Parusinka Island. Children will certainly like it here - there is some romance in this place. Few … Read more

Map of Estonia cities for family trip with kids