Video of flights over top monuments of Dublin in HD format.
Use 'Full Screen' mode.
Of course, in order to feel the magnificent atmosphere of Dublin, one needs to visit this place, walk on charming streets of the historical center, visit local cafes, and enjoy the look of the local landmarks - St Patrick Cathedral, The Custom House, National Museum of Ireland, Dublin Writers Museum, Museum of Modern Art and many others. In order to make your virtual tour to the city more interactive, we offer an unusual opportunity to fly over every notable landmark of Dublin. Simply start the video, and use the full-screen mode. Each landmark comes with extra information, containing a collection of interesting facts and a photo gallery. Let’s go! 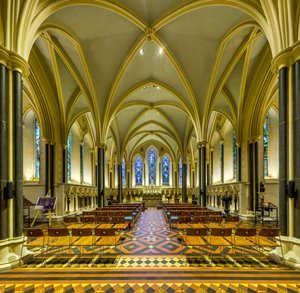 Facts:
» The St. Patrick Cathedral is the largest cathedral in Ireland.
» Throughout the history, this shrine has always been inextricably associated with the Irish culture. Jonathan Swift, the famous writer and satirist, was the dean of the cathedral from 1713 to 1745; many of his famous sermons and "Irish tracts" were written during his deanship.
» Since 1783 to 1871 knights were accoladed in the Cathedral. The cathedral is still possible to see the emblems of those conferring knighthood.
» The Cathedral is the venue for many public and national ceremonies. Every November there is the Day of Remembrance; the President of Ireland attends the ceremony.
» The Cathedral is the burial site of two Irish presidents; Douglas Hyde in 1949, and Erskine Childers in 1974.
» In 2006, the cathedral took 18 Afghan refugees seeking to obtain political asylum, and housed them for a few days. 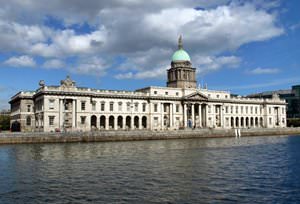 Facts:
» The Custom House is one of the main Classical architectural attractions of the Irish capital.
» Its façade is decorated with heraldic images and sculptures by Edward Smith symbolizing rivers of Ireland. The statue on the dome of the building and some other sculptures were created by sculptor Henry Banks.
» At the time, the use of the building for the collection of custom fees has lost relevance, so it was used as the headquarters of the local government in Ireland.
» During the War for Independence in 1921 The Irish Republican Army has burned the building. The original interior of the building was completely destroyed by fire and the central dome collapsed.
» After declaring the independence of Ireland, by the decision of the Government of the Irish Free State the building was completely renovated. 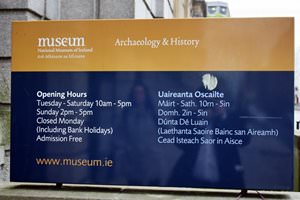 Facts:
» The National Museum of Ireland is situated in the heart of Dublin. The museum specializes in Irish art, culture and natural history.
» A rich collection of the National Museum includes prehistoric gold jewelry, Celtic outfits, numerous early Christian jewelry and relics, forging metal and more.
» Clonycawan Man, a well-preserved body of a man of the Iron Age, found in Clonycawan can be seen in the museum. The height of the former was 1.57 cm.
» Ethnographic museum collections were gathered in the farthest corners of the world: Polynesia, South America, West Africa, etc. Collections of applied art and history tell us about the culture of the country and its people over the past two millennia. 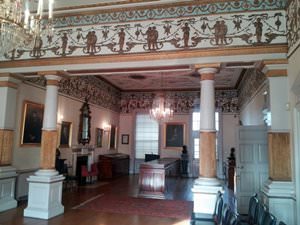 Facts:
» The Dublin Writers Museum is located in the building of the 18th century, where the exposition, library, gallery and administration are situated.
» The extension to the building of the museum houses a cafe and a bookstore on the first floor, and exhibition and lecture halls on the upper floors.
» The Ireland Writers Center is in the next building. The basement of both buildings is occupied by The First Chapter restaurant.
» The museum was founded in order to attract public attention to Irish literature. It acts as a nationwide center complementing museum exhibitions devoted to individual writers such as James Joyce, George Bernard Shaw, William Butler Yeats and Patrick Pierce.
» The museum features works of internationally renowned and local Dublin writers. 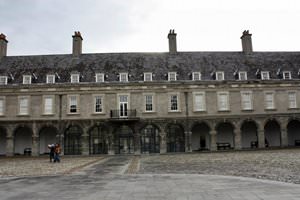 Facts:
» The Irish Museum of Modern Art was opened in 1991 in the old building of the Royal Hospital constructed in the 17th century.
» The Museum of Modern Art is one of the most beautiful buildings in Ireland.
» During conversion, glass stairs and aluminum railings were built for needs of the museum. Its space is lit according with exhibits order.
» The museum organizes temporary exhibitions, arranges theatrical performances, concerts and other cultural events.
» The park, the meadow and the medieval burial are also included in the museum complex.

CONTINUE - PART II »»
This guide to architectural sightseeing in Dublin is protected by the copyright law. You can re-publish this content with mandatory attribution: direct and active hyperlink to www.orangesmile.com.
Dublin - guide chapters 1 2 3 4 5 6 7 8 9 10 11

Build your walking routes in Dublin on the landmark map

Architectural landmarks in the regions around Dublin

Liverpool
At the beginning of the last century, the London company decided to enlarge the space for 6 thousand workers. The construction lasted three years. The opening ceremony took place in 1911. It was visited by a famous politician and nobleman Edward Stanley. In 60 years, the building was restored completely and its offices were equipped with modern appliances. When the 100th anniversary of the building was celebrated, the 3D laser show was ... Open »
Manchester
Manchester Town Hall is one of the main attractions in Manchester. It was decided to construct a new town hall in 1863 because the old one did not suit the developing town. The famous architect Alfred Waterhouse built a building in 1877 in the New Gothic style. There are almost no decorative elements on its facade. An 85-meter tower with a clock and 23 bells rises above the Town Hall. Although it looks like an old construction, it has all ... Open »
Cardiff
The City Hall, a 60-meter clock tower, is one of the administrative institutions included in the single complex. The square dome is covered with gilded disks. There is an intimidating dragon on the roof. The exterior facade is faced with white stone and limestone. There is a rectangular pool in front of the City Hall. The fountain complex was founded when one nobleman received the title of the Prince of Wales. At the first level, ... Open »
Glasgow
The university was founded in 1451. The educational institution includes research centers and has partners from all over the world. Glasgow University is the first university in the country that has had computers since 1975. There are 5 800 teachers educating 23 000 students at 9 faculties. The teaching staff has developed educational programs for all levels. The university is proud of 7 laureates of the prestigious international award. The ... Open »
Edinburgh
The Edinburgh Castle is the ancient fortress in the center of Edinburgh, which is the most important and attractive tourist attraction of the Scottish capital. The castle was built on the rock that was once an active volcano. The castle has been built in the early Middle Ages and was rebuilt several times. In the end, it was adapted for the defense of land from artillery. Three sides of the fortress are protected by steep cliffs, so access to ... Open »
OrangeSmile.com - online travel reservation expert providing reliable car rental and hotel booking services. We feature more than 25.000 destinations with 12.000 rental offices and 200.000 hotels worldwide.
Secure Server