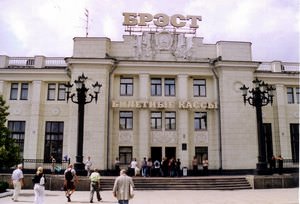 Brest is a very ancient city, one of the first, which was founded on the Belarusian land. It developed swiftly and confidently. It was a military fortress, a trading city, and an important customs center. The city has preserved historical objects of various epochs, familiarity with which will allow one to fully appreciate its multifaceted culture.
Cuisine of Brest for gourmet with top restaurants and cafe
Speaking about the culinary traditions of the city, it is worth mentioning the strong influence of Europe. The ancient Belarusian city borrowed from neighboring states a lot of interesting …

Open
The famous Brest Fortress, built in the 19th century deserves separate attention. Its name has long been a household name. The fortress was built immediately after the Patriotic War of 1812, although the construction projects were developed much earlier. The brilliant military engineers of that time - Feldman, Maletsky and Opperman, worked on the fortress project. Six years was spent on the construction of the fortress. It consisted of a mighty Citadel and many other fortifications on the banks of the Western Bug and the Mukhovets River. Around the Citadel itself there were many additional structures, and in the thickness of earthen ramparts there were casemates, which were additionally protected by two-meter walls.
Museum of Railway Technology, founded recently, in 2002 will be very interesting for lovers of history. The exposition of the museum is unique and incredibly interesting. It includes more than 50 different carriages and locomotives of the last century. No less interesting are the expositions of the Archaeological Museum "Berestye". It is here that you can learn about the important events that the ancient city and its inhabitants had to endure. Here, the ruins of residential and economic buildings, objects of everyday life of the townspeople and cultural values have been preserved. On the territory of the museum there are also open buildings, which recreate the appearance of the ancient city, involuntarily returning one to the past. Copyright www.orangesmile.com
Guide to Brest sightseeing - things to see and to visit
Brest is one of the oldest Belarusian cities along with Vitebsk, Turov and Polotsk. According to one of the local legends, originally on its territory was an ancient temple dedicated to the …

Open
Fans of hiking should appreciate the beauty of the ancient streets of Brest, which also are decorated by priceless historical monuments. Pedestrian Street is not without reason considered one of the most beautiful. Recently it was completely restored, and therefore you can admire the buildings that have survived since the 19th century. An ideal place for hiking and admiring sites is the quarter between Gogol Boulevard and Mickiewicz Street, where many elements of ancient urban development have been preserved. The city was seriously damaged during the Great Patriotic War, and therefore only a small part of its unique historical buildings were preserved on its territory.

This guide to cultural sights Brest is protected by the copyright law. You can re-publish this content with mandatory attribution: direct and active hyperlink to www.orangesmile.com.
Brest - guide chapters 1 2 3
Reference information
Map of all churches

Cathedrals and basilicas near Brest
♥   Bazylika św. Piotra i św. Pawła, Leśna Podlaska, 43.6 km from the center. On the map

♥   Bazylika Narodzenia NMP i św. Mikołaja, Bielsk Podlaski, 77.9 km from the center. On the map

The village of Hyervyaty (Gierviaty) is famous for its Holy Trinity Catholic Church. It was built by Prince Olszewski at the beginning of the 20th century. This is the largest Catholic church in Belarus. The stone church was built on the site of a wooden one that dated back to the 16th century. Tall and sharp spires of the neo-gothic building look very unusual for the typical countryside landscape. Around the church, there is a real small French park with its straight roads and ideal geometry of lawns and bushes. The Holy Trinity Catholic Church operates as a church, but unique acoustic properties make it one of the best pipe organ halls in the country. The pipe organ in the Holy Trinity Catholic Church was made specifically for this building, and it sounds just as great as right after the installation. … Open

Photogallery of cultural heritage of Brest

Excursions over cultural sights of neighbours of Brest

Bialystok
Podlasie Museum is one more landmark that tourists will find interesting to attend as the venue exhibits a rich collection of ethnographic and archeological artifacts. One of the museum’s halls is dedicated to a collection of art with “portraits of great Polish personalities”, so fans of art will also not be disappointed with the museum. The city’s neighborhood is the ... Open »
Lublin
A vivid classicism monument is the Pałac Potockich, which can be seen on one of the central streets. The 18th-century castle is notable for its unusual architecture - the building was built in the shape of a horseshoe. Beautiful stones were used during its construction. The palace has remained almost unchanged since its foundation. Initially, the palace was privately ... Open »
Warsaw
Many interesting attractions can be found near Pilsudski Square. In the beginning of 20th century the square was the location of stunningly beautiful Alexander Nevsky Cathedral. The height of the cathedral was 70 meters. For a long time the cathedral remained the tallest building in Warsaw. However, the cathedral was completely destroyed by the order of the city’s ... Open »
Lviv
Being the best incarnation of the Neo-Gothic Architecture the church by its form resembles a traditional French construction. Another object of touristic interest is the St. Yura Cathedral being a scaled architectural complex built in the Rococo style. The church is the global scale landmark and is considered to be the most impressive building of the city. The religious ... Open »
Lodz
The most interesting place in the city still remains Piotrkowska Street. It is totally deprived of city transport that makes it a fine place for hiking. During the stroll the guests of the city can not only visit the most popular shops and restaurants but also enjoy numerous landmark sights. At each turn the visitors will meet historical buildings and monuments each of which ... Open »
Vilnius
Hill of Three Crosses is a truly striking natural attraction. One of the highest hills is the location of a monument that was erected here back in the medieval period. The famous Three Crosses were completely destroyed during the Second World War. The restoration of the monument was completed only in 1989. Today there is a large observation deck next to the monument. This is a ... Open »

Culture guide to Brest. Which fascinating sights to visit once you are in Brest: temples, churches, museums, theaters and castles. Recommendations (with addresses, phone numbers and links) on the places 'must visit' in Brest. Plan your own city excursion by using this page info!