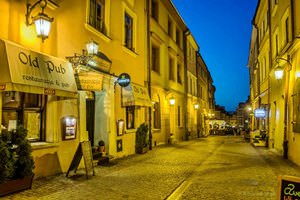 Many historical and architectural sights have been preserved in Lublin. One of the main symbols of the city is the Archikatedra św. Jana Chrzciciela i św. Jana Ewangelisty. Since its construction in the 16th century, it is the city's largest church built in the best traditions of the Baroque style. Throughout its history, it has been repeatedly reconstructed, and in 1751, the building was badly damaged by fire. Through the efforts of local residents, the church was quickly restored, its appearance has not changed much since the mid-18th century.
Cuisine of Lublin for gourmet with top restaurants and cafe
In Lublin, you can taste a lot of interesting dishes that are not common in other Polish cities. A great example is Cebularz, a wheat dough pancake with onions and poppy seeds. This dish …

Open
The cathedral has preserved beautiful paintings dating back to the years 1755-1757. Its visitors can also see beautiful sculptures of saints created by famous masters of the 18th century. Today, part of the old cathedral is occupied by a thematic museum, which contains a valuable collection of religious artifacts. A bell tower of the church is the tallest structure in the historic district offering wonderful panoramic views of the city.
Not far from the cathedral is the Town Hall building, the construction of which was completed in 1828. It is still used for its intended purpose. The seat of the mayor, as well as the offices of various municipal organizations, are currently located in the historic building. At the beginning of the 17th century, there was a large monastery on the site of the Town Hall, which was almost completely destroyed by fire in 1803. The building was damaged beyond repair, so 20 years after the devastating fire, it was decided to build a new town hall in its place. During the Second World War, the Town Hall was partially destroyed but quickly restored in the postwar period. Copyright www.orangesmile.com
Authentic traditions, festivals and lifestyle of Lublin inhabitants
Lublin will surely appeal to fans of event tourism and those wishing to get acquainted with the region's historical traditions. Throughout the year, they hold many interesting festivals and …

Open
The wonderful Zamek w Lublinie is one of the most visited city attractions. The castle is located in the very heart of the city, the first defensive structure appeared in its place in the 12th century. The first major renovation of the fort took place at the beginning of the 16th century. The newborn castle turned out to be so sumptuous that it was subsequently used as a royal residence. Its spacious halls have seen the most important meetings and chic balls. Over time, the castle has completely lost its original defensive function. 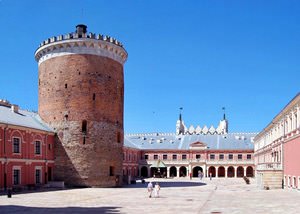 A new stage in the history of the castle began in the 19th century when it was partially destroyed during hostilities. After the war, it was converted into a prison for political criminals. In the 20th century, the historic building underwent a complete renovation. Today, the castle houses a very interesting museum. It keeps collections of antique furniture and works of art. A significant part of the exhibition is devoted to the region's craft traditions. The museum stores collections of old documents. During the Middle Ages, many important agreements for the region were concluded within the walls of the castle.
Your active city break in Lublin. Attractions, recreation and entertainment - best places to spend your day and night here
The main entertainment for visitors to Lublin is walking in picturesque parks and gardens. Besides, several interesting entertainment centers are open in the city. One of the most beautiful …

Open
A vivid classicism monument is the Pałac Potockich, which can be seen on one of the central streets. The 18th-century castle is notable for its unusual architecture - the building was built in the shape of a horseshoe. Beautiful stones were used during its construction. The palace has remained almost unchanged since its foundation. 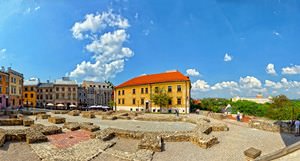 Initially, the palace was privately owned by one of the local wealthy families, and at the end of the 18th century, it was transferred to state ownership. A barracks for soldiers were founded in the building, and later it housed a warehouse and a prison, which functioned for more than 30 years. During this period, the palace lost almost all of its values. After the end of World War II, it remained in desolation for a long time. In 1994, the historic building was transferred to one of the local universities.
Advices to travellers: what you should know while being in Lublin
1. The city has a railway station where high-speed trains bound for neighboring countries every day. Lublin also has regular bus connections with many states. 2. The main types of public …

Open
One of the oldest buildings in Lublin is the 16th-century Pałac Lubomirskich, a striking classicism monument. This palace was built for the wealthy local family Firleja, and subsequently, it became the patrimonial estate of the Lubomirski family, after which it received its current name. Throughout hundreds of years, the beautiful palace has changed by many eminent owners. After the end of World War II, it was also transferred to one of the local universities. Educational buildings are based here today, and several times a year, the palace is open for free visits. Its guests will have a chance to appreciate the well-preserved interior design, as well as see valuable antique jewelry that was miraculously saved during the war years. Around the palace is a beautiful landscaped garden with ornamental plants. The best time to visit the architectural monument is the warm season.

In the section below, you can get one of our excursion, activities or city discovery tours over Lublin and surroundings. Our website offers 10-30% lower ticket prices, when compared to the offline purchase on the spot.

City tours, excursions and tickets in Lublin and surroundings

This guide to cultural sights Lublin is protected by the copyright law. You can re-publish this content with mandatory attribution: direct and active hyperlink to www.orangesmile.com.
Lublin - guide chapters 1 2 3 4 5 6 7 8 9
Reference information
Map of all palaces

Public palaces near Lublin
♥   Palace 'Kozłówka Palace' , 23.9 km from the center. On the map

Cathedrals and basilicas near Lublin
♥   Bazylika św. Anny, Lubartów, 24 km from the center. On the map

♥   Kościół św. Franciszka Ksawerego, Krasnystaw, 51.6 km from the center. On the map

♥   Katedra Zmartwychwstania Pańskiego i św. Tomasza Apostoła, Zamość, 76.2 km from the center. On the map

Photogallery of cultural heritage of Lublin

Excursions over cultural sights of neighbours of Lublin

Brest
Museum of Railway Technology, founded recently, in 2002 will be very interesting for lovers of history. The exposition of the museum is unique and incredibly interesting. It includes more than 50 different carriages and locomotives of the last century. No less interesting are the expositions of the Archaeological Museum "Berestye". It is here that you can learn about the ... Open »
Warsaw
The city is also home to several ancient palaces, the most famous of which is the Royal Castle. The main building of the palace was built in 1618. During the long history of the palace its territory has expanded greatly and so new wings and outbuildings appeared there. All visitors are welcome to walk through most beautiful rooms of the palace, each of which has its own ... Open »
Lviv
The Lvov Opera House will be of great interest not only for theater lovers but for admirers of ancient architecture. The Lvov Opera House is considered to be one of the best in Europe. In front of the Opera House a small court is equipped. The court features fountains and flower beds. The building of the Lvov City Hall should be undoubtedly included in the tour. One of the ... Open »
Bialystok
Bialystok is an old city, so a mere walk on its central district can easily replace an excursion. Such buildings as Dom Koniuszego or the House of the Equerry, both of which belong to the 18th century, have become true architectural landmarks of the region. The Palace of the Lubomirski family and the magnificent Dojlidy Park that is adjacent to the building is also a popular ... Open »
Lodz
One of the most beautiful monuments is Petersi House built in 19th century in Art Nouveau style. Izrael Poznanski Palace is one of the most popular excursion destinations in Lodz being an interesting architectural construction. All the visitors can walk through the halls of the palace and enjoy the collections of priceless antique items. The halls are decorated with exquisite ... Open »
Krakow
There are many notable religious buildings in Krakow. Church of the Holy Cross, built in the 14th century, is surely among them. The halls of this beautiful Gothic building are decorated with hand-painted pictures, made by the legendary monk Stanisław Samostrzelnik. Don’t forget to visit Zygmunt Chapel, near which you will find the graves of great Polish kings. The ... Open »

Culture guide to Lublin. Which fascinating sights to visit once you are in Lublin: temples, churches, museums, theaters and castles. Recommendations (with addresses, phone numbers and links) on the places 'must visit' in Lublin. Plan your own city excursion by using this page info!