Cuisine of Brest for gourmets. Places for dinner - best restaurants 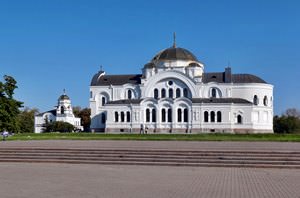 Speaking about the culinary traditions of the city, it is worth mentioning the strong influence of Europe. The ancient Belarusian city borrowed from neighboring states a lot of interesting gastronomic traditions, while preserving its true national basis. For local people, potatoes are not just a national dish, but the second bread, without which, it is very difficult to imagine a meal. Almost all Belarusian dishes, one way or another, have potatoes in their composition. It can be absolutely independent dishes or simply a side dish.
Excursion over cultural sights of Brest - 'must visit' points of interest
Brest is a very ancient city, one of the first, which was founded on the Belarusian land. It developed swiftly and confidently. It was a military fortress, a trading city, and an important …

Open
Boiled potatoes or potato porridge are used here as usual daily food. Local people often cook potatoes with mushrooms and also eat it in a variety of salads. It is from potatoes that a variety of cakes and other culinary delights, including pancakes, which can safely be called the favorite national dish, are prepared. However, you should not think that the Belarusian cuisine can surprise only with the predilection for potatoes.
In fact, here, as in Russia, meat dishes are very popular, which are prepared from veal, beef and especially from pork. Salo in Brest is also very much in demand, and the usual roasted lard is a frequent component of potato and flour dishes. From fresh pork a lot of different sausages and cutlets, as well as all beloved Slavs’ meat jelly are made. Copyright www.orangesmile.com
Guide to Brest sightseeing - things to see and to visit
Brest is one of the oldest Belarusian cities along with Vitebsk, Turov and Polotsk. According to one of the local legends, originally on its territory was an ancient temple dedicated to the …

Open
As for the first dishes, most often here they prepare a variety of soups, adding in them cereals, vegetables, greens and mushrooms. Mushrooms, like potatoes, are quite common here, especially as one of the components of cereals or flour products. It is worth noting that mushrooms here are fried extremely rarely. They are usually simply boiled or stewed, and added to various dishes. 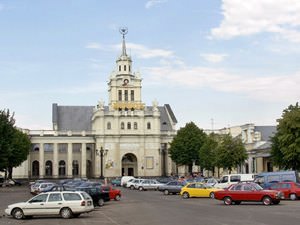 This feature, concerning the method of cooking, applies also to fish. It can be baked in the oven, boiled and even dried, but fried fish in the menu of national restaurants of Brest will be very difficult to find. Native people everywhere use so-called "black" flour. Belarusian bread is always baked exclusively from rye flour, whereas for all other flour products, oatmeal is used most often. It is because of the use of oat flour that Belarusians never baked pies before and did not know what pancakes were, unlike their Russian neighbors.

This guide to cuisine and restauraunt in Brest is protected by the copyright law. You can re-publish this content with mandatory attribution: direct and active hyperlink to www.orangesmile.com.
Brest - guide chapters 1 2 3

The process of cooking the dish is the following: the meat is roasted until it becomes crispy outside (add salt and pepper before roasting) and put on a plate from a frying pan. Then onions are sliced and roasted in the same pan with remains of meat juice. After that, take a clay pot and put meat and onion inside. Pour Kvass in the pot and put the pot into a Russian stove where the dish is cooked for 20 more minutes. The ready dish is served with famous Draniki or mashed potatoes – these garnishes taste well with pork ribs in Kvass. … Open

Searching where to eat - restaurants and cafe on Brest map

Cuisine and restaurants in the neighbours of Brest

Bialystok
Fans of international cuisine will be pleased with Esperanto café and restaurant that is located in the central part of the city. The restaurant has a symbolic name – the inventor of Esperanto was born in Bialystok. The menu is full of national delicacies and traditional international cuisine dishes such as baked turkey breasts with cranberry sauce. Fans of fast-food and ... Open »
Lublin
Kardamon Restaurant invites foreigners to try traditional Polish food. All its dishes are distinguished by a very beautiful artistic serving, which is rather an exception for local restaurants. Guests will have a chance to explore traditional dishes of various types of meat, enjoy rich soups and fresh home-style cakes, as well as try signature berry and fruit desserts. The ... Open »
Warsaw
Belwedere restaurant is very famous among luxury dining facilities of the city. This restaurant is located in a beautiful park. The restaurant is open in an elegant historic building. The menu of Belwedere consists mostly of popular dishes of international and Polish cuisines. Among signature dishes of the restaurant are such delicacies as venison in plum sauce, beef with ... Open »
Lviv
A rich selection of European cuisine dishes is presented in the Culinary Studio Kryva Lypa. Guests will be stunned with the vast choice of salads, fish and meat dishes, refreshing drinks and delicious desserts. This budgetary inn will be a perfect place for a family visit. A full diner of three courses will cost about 15 Euro. One of the most romantic eating places of Lvov is ... Open »
Lodz
Devote fans of Irish beer will find a proper place to restore and enjoy the favorite drink. A cozy pub Irish Pub offers to its guests the most popular beer sorts and a good selection of snacks and specialities. The evenings in the pub are always accompanied with live music and cozy and home like atmosphere. The special attention should be given to the Soplicowo Restaurant ... Open »
Vilnius
Marceliukas Kletis restaurant specializes in national cuisine and is decorated in a unique rustic style. In the restaurant’s hall is installed massive wooden furniture, and food is served to visitors on large wooden dishes. Zemaiciu Smukle restaurant has gained recognition among visitors due to large choice of dishes at reasonable prices. Portions are quite large in this ... Open »

Travel notes on best cuisine and restaurants of Brest (Belarus) on OrangeSmile.com. Famous recipes and traditional dishes and courses in Brest restaurants. Where to eat - our recommendations on popular places in Brest, where you can taste delicious meal and also spend a good time with your friends.