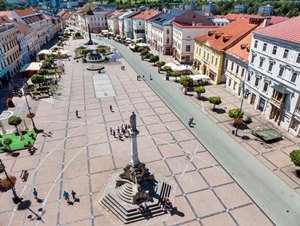 Banska Bystrica remains one of the country's leaders in terms of the diversity of historical sights and cultural centers. In the city, you can see architectural monuments of various periods. One of the oldest local buildings is Thurzov dom. The first Gothic-style houses were built on its site over 600 years ago. In 1495, they were bought by one of the wealthy local entrepreneurs, Jan Thurzo, who decided to build a luxurious secular house on the site of dilapidated buildings.
Guide to Banska Bystrica sightseeing - things to see and to visit
Central Slovakia is home to an unforgettable tourist destination, the name of which can be translated as “Mining stream”. Nowadays, we know this gorgeous settlement under the name Banska …

Open
The building you can admire today is a striking architectural monument in the Renaissance style featuring original facade decoration. Currently, the historic building houses a museum. You will also notice its beautiful 15th-century frescoes and other unique decoration elements. The museum houses an interesting collection of paintings that belong to different periods, collections of old weapons and coins, as well as the most valuable archaeological finds ever discovered in the region.
Be sure to explore the city's ancient fortifications. Of greatest interest here is the Barbakan Tower. Built in the early 16th century, it had been the city's main watchtower for many years. A bell chamber at its top has survived virtually unchanged to the present day. One of the largest bells in Slovakia weighing 6 tons is installed here. The tower stands on a small hill, so it serves as an excellent landmark for many tourists visiting the city for the first time. The tower is available for internal inspection. Many historical artifacts have been preserved within its ancient walls. Copyright www.orangesmile.com
Your active city break in Banska Bystrica. Attractions, recreation and entertainment - best places to spend your day and night here
Besides walking along the picturesque historic streets and sightseeing, you‘ll have a chance to explore the local natural beauty. Banska Bystrica is located in an incredibly beautiful …

Open
Among the most unusual historical monuments is the ancient clock tower Hodinova veza located in the very heart of the Old Town. The very first tower was erected on its site back in 1552, but it was completely destroyed by fire in the 18th century. Later, the tower was rebuilt in accordance with its original appearance. 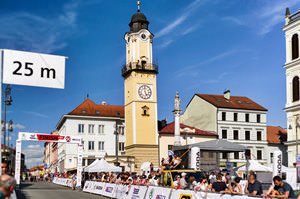 However, the architects made some serious mistakes when reconstructing the 34-meter-high tower. For this reason, the tower has deviated from the central axis by over 60 cm over the years. The leaning tower is now one of the most amazing symbols of Banská Bystrica. Despite such an interesting nuance, experts note that the tower is not in danger of collapse. On its upper level, you can visit the city’s most popular observation deck offering a gorgeous view of the historic streets.
Shopping in Banska Bystrica - main shopping streets, outlets and boutiques
The central street of Banská Bystrica is a series of interesting stores and shopping centers. Pay special attention to the shops selling goods produced here in Slovakia. Among the variety …

Open
On one of the old streets, you can see the beautiful Cisarsky dom. It was built in the Middle Ages and has undergone multiple reconstructions over the centuries. The building you can see today reflects its original appearance after the reconstruction in 1832. Cisarsky dom is considered a vivid example of classical architecture. The luxurious house once belonged to a famous military leader. The building has preserved an old cellar, which currently houses one of the most popular traditional restaurants in town. Many people come here not only to taste popular local dishes but also to admire the artistic murals adorning the ceilings and walls. The historic building has also preserved an arch, which now hides a small shopping arcade. 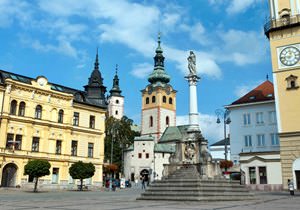 Among the most interesting religious monuments in Banska Bystrica is the Kostol Nanebovzatia Panny Marie. The exact date of its construction is unknown but experts believe that the church was built at the end of the 13th century. The first written mention of the church dates back to 1442. Over hundreds of years, it has gone through many reconstructions. Nevertheless, the church retains many valuable religious artifacts and artistic decorations. You’ll have a chance to see the beautiful 15th-century sculptures, as well as admire the wonderful Baroque frescoes created over 200 years ago.
Guide to Banska Bystrica sightseeing - things to see and to visit
Central Slovakia is home to an unforgettable tourist destination, the name of which can be translated as “Mining stream”. Nowadays, we know this gorgeous settlement under the name Banska …

Open
One of the brightest city attractions is the Pribicerov dom. The historic building has a colorful façade that was painted green during one of the last renovations. Beautiful reliefs and other decoration elements have been preserved on its facade. The building was built in the second half of the 15th century and has changed many famous owners over the years. On the ground floor, you will find one of the city's oldest cafes, which has been visited by many celebrities.

In the section below, you can get one of our excursion, activities or city discovery tours over Banska Bystrica and surroundings. Our website offers 10-30% lower ticket prices, when compared to the offline purchase on the spot.

This guide to cultural sights Banska Bystrica is protected by the copyright law. You can re-publish this content with mandatory attribution: direct and active hyperlink to www.orangesmile.com.
Banska Bystrica - guide chapters 1 2 3 4
Reference information
Map of all churches

Cathedrals and basilicas near Banska Bystrica
♥   Katedrála Najsvätejšej Trojice, Žilina, 61.8 km from the center. On the map 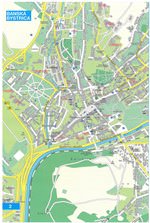 Excursions over cultural sights of neighbours of Banska Bystrica

Zakopane
Zakopane has architectural and historical sights, as well as some very unusual museums. Perhaps one of the most unusual cultural institutions is the Karol Szymanowski Museum, which is also known among tourists as the Villa Atma. It is a nice wooden house surrounded by dense thickets of trees. This villa has belonged to the world-famous composer. It has fully preserved the ... Open »
Vysoke Tatry
The resort of Tatranska Lomnica will also please tour enthusiasts. The most visited cultural center of the region, the Museum of the Tatra National Park, is located exactly here. It is interesting for the whole family and is dedicated to the peculiarities of local nature. Those travelers who want to learn a lot about national peculiarities of the local residents should visit ... Open »
Ostrava
The surviving buildings were converted into museums, most of which are focused on the technical and industrial achievements of the Czech Republic. Here you can see old blast furnaces and other industrial equipment that was used by local plants more than a hundred years ago. Visitors to the industrial complex will also have the opportunity to stroll through a historic iron ore ... Open »
Kosice
Among the most notable religious sites, Dominican Church points out. The exact date of the founding of the church is unknown, according to one of assumptions it had opened in the late 13th century. Over the years the church has significantly changed its appearance; only Romanesque nave of the original building has preserved. The ceiling of the church is decorated with ... Open »
Krakow
The legendary Krakow Market Square remains the permanent symbol of the city. The square was founded back in medieval times. This is also the largest square in Europe. Market Square has a square shape and the length of its sides estimates 200 meters. On the square is located kostel sv. Vojtěcha, the construction of which took place in the end of the 11th century, as well as ... Open »
Bratislava
Historical and architectural monuments are the main attraction of Bratislava. They never cease to amaze visitors with their grandeur, and are a real pride of the local people. You will find several beautiful castles throughout the city and in its suburbs. Bratislava Castle is definitely the most famous of them. This large-scale structure is located in the heart of Bratislava. ... Open »