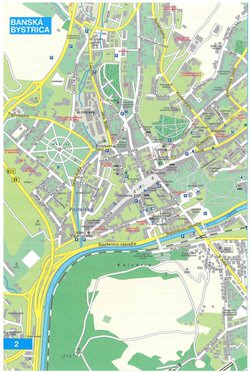 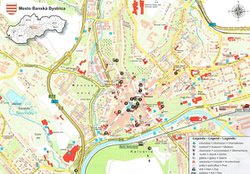 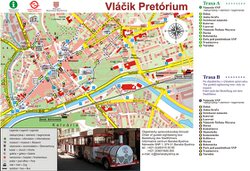 Interactive maps of hiking and biking routes around Banska Bystrica

1. You can zoom in/out using your mouse wheel, as well as move the map of Banska Bystrica with your mouse.
2. This interactive map presents two modes: 'Biking Routes' and 'Hiking Routes'. Use the '+' button on the map to switch between them.

This Banska Bystrica map has two modes: 'Railway Network' and 'Landscape & Rural Map'. Use the '+' button on the map to navigate.

Our guide to Banska Bystrica

Kremnica Castle is a landmark that is incredibly popular with tourists. This castle is located in the nearby town of Kremnica. The Black Tower in the south-west of the castle complex is an interesting architectural landmark that is worth exploring. The tower was built in the 15th century, but it still has its original look and design. Tourists from all over the world come to Slovakia, to Kremnica to explore the … Open

Maps of Zakopane
The city is largely focused on the enthusiasts of an active holiday. Therefore, the variety of sports and entertainment complexes is huge. The Aqua park Zakopane has been recently opened. So now you can diversify your leisure with water sports, not only with ski trips. The Aqua Park has 3 large pools and 6 Jacuzzis and lots of colorful slides. Fans of thrills will also find ... Open »
Maps of Vysoke Tatry
A lot of interesting things are waiting for fans of cross-country skiing. There are almost two dozen kilometers of trails of different levels near the town. They will appeal to both beginners and experienced athletes. There are also 58 kilometers of trails for skiers and snowboarders here. It is worth climbing to the top of Hrebienok for those who love to overcome ... Open »
Maps of Ostrava
Fans of interesting entertainment should totally visit Hvezdarna a planetarium Johanna Palisy. This observatory opened in 1980 forms a single unit with a planetarium. It got the largest projector in the country, and thematic programs and lectures on various fields of astronomy are held here every day. The huge projector makes it possible to broadcast a detailed map of the ... Open »
OrangeSmile.com - online travel reservation expert providing reliable car rental and hotel booking services. We feature more than 25.000 destinations with 12.000 rental offices and 200.000 hotels worldwide.
Secure Server