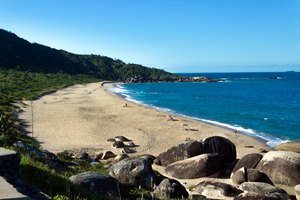 Balneario Camboriu is one of the youngest cities in Brazil, so it cannot boast of a variety of historic streets and attractions. Nevertheless, you can find several old houses that were built here during the existence of small colonial towns. A very interesting historical building is the Capela de Santo Amaro erected in 1810. Recently, it was recognized as a historical monument of national importance. One of the main features of the church is its unique architecture.
Family holidays with kids in Balneario Camboriu. How to entertain your child, things to show to children.
Brazil is a country with many family-friendly cities, and Balneario Camboriu is definitely among the leaders in this category. Besides cultural attractions, the city is famous for its …

Open
It was built of stones that were mined in local quarries. Interestingly, whale oil served as the main binding material during its construction. The surprising thing is that the chapel has remained intact for over 200 years and has not undergone any major reconstruction. The old chapel stands in the picturesque district of Bairro-da-Barra, one of the oldest in the city. It was here that one of the first large settlements was founded in the 18th century. Hundreds of years ago, there was a large pier for fishing boats not far from the church.
Another interesting city attraction is the Cristo Luz (Christ Light) statue that was installed on the top of the hill Morro da Cruz in 1997. It looks pretty much like the legendary statue of Christ in Rio. Climbing to the top of the hill is a very popular activity among tourists. Here, they can not only admire the huge statue up close but also enjoy the stunning panorama of the city. At night time, the 33-meter statue is decorated with beautiful artistic illumination. Copyright www.orangesmile.com
Your active city break in Balneario Camboriu. Attractions, recreation and entertainment - best places to spend your day and night here
Beach recreation is the main entertainment option for guests of Balneario Camboriu. The city has created excellent conditions for both serene relaxation on the coast and water sports. In …

Open
The city is famous for its beautiful skyscrapers, which might be of great interest to fans of walking tours. One of the most famous skyscrapers is Palace Millennium, which has remained the tallest in Brazil for quite a long time. It is located near the coast and is clearly visible from many parts of the beach and the waterfront. 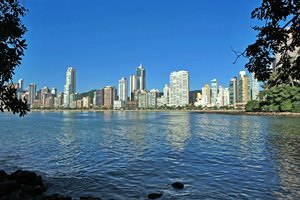 Avenida Brasil is considered the most beautiful street rich in luxurious buildings. Here you can see original skyscrapers designed in various architectural styles, well-equipped recreation areas, and many beautiful landscape decorations. Here, the rooftops of many skyscrapers are equipped with chic recreation areas with swimming pools and observation decks. The most expensive and prestigious real estate is located on the main street of Balneario Camboriu.
Shopping in Balneario Camboriu - main shopping streets, outlets and boutiques
In addition to picture-perfect beaches, Balneario Camboriu is ready to offer travelers a huge selection of shopping spots. Here, you can visit many first-class shopping centers where they …

Open
Modern churches that have been built in the city over the past decades are of equally great interest as architectural monuments. Igreja de Santa Inês is a very unusual church that occupies a large building crowned with an original umbrella-like roof. This makes the church look a bit like oriental religious monuments. The roof looks just as impressive from the inside as from the outside. Igreja de Santa Inês has a spacious round hall that has been used for holding various cultural and social events since its opening. 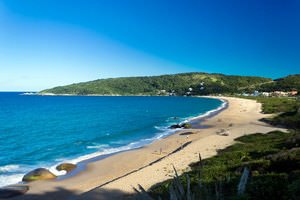 If you feel like the city's sights are not enough, go explore its picturesque surroundings. Many historical attractions have survived in the town of Itajai, which is less than ten kilometers away from Balneario Camboriu. The main symbol of this town is the sumptuous cathedral Paroquia Santíssimo Sacramento striking with its subtle decoration. The facade of the church is decorated with traditional rose windows, beautiful statues and carvings, and a large clock hanging above the main entrance.
Guide to Balneario Camboriu sightseeing - things to see and to visit
The resort town of Balneario Camboriu is a charming place perfect for a tranquil beach holiday. It is located in the south-east of Brazil. The state of Santa Catarina is the place where …

Open
The interior of the cathedral is fabulously beautiful too. Its walls and ceiling are decorated with artistic murals depicting scenes from the life of Christ. The cathedral features precious wood finishing and traditional massive wooden furniture in its hall. It is worth noting the skillful stained glass windows, which are especially admirable on a sunny day. The religious monument looks attractive both during the day and at night when it is spectacularly illuminated. 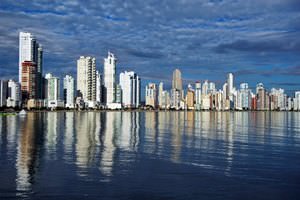 In front of the cathedral, you can see a beautiful square with fountains, decorative pools, and landscape decorations. Nearby is the small Capela Santa Terezinha, which is another important historical monument of the region. A narrow stone staircase leads to its entrance. The chapel’s interior features rather modest decoration. Among the valuables, it is worth noting several beautiful ancient statues, as well as a beautiful wooden crucifix made by Brazilian craftsmen.

In the section below, you can get one of our excursion, activities or city discovery tours over Balneario Camboriu and surroundings. Our website offers 10-30% lower ticket prices, when compared to the offline purchase on the spot.

City tours, excursions and tickets in Balneario Camboriu and surroundings

This guide to cultural sights Balneario Camboriu is protected by the copyright law. You can re-publish this content with mandatory attribution: direct and active hyperlink to www.orangesmile.com.
Balneario Camboriu - guide chapters 1 2 3 4 5
Reference information
Map of all churches

Cathedrals and basilicas near Balneario Camboriu
♥   Catedral São Francisco Xavier, Joinville, 79.3 km from the center. On the map

Excursions over cultural sights of neighbours of Balneario Camboriu

Florianopolis
One of the main symbols of the city is Hercilio Luz Bridge (Ponte Hercilio Luz) that connects the mainland to Florianopolis' island parts. The construction of the bridge was completed in 1926. It has been the longest suspension bridge of Brazil and one of the most biggest structures of its kind on the planet for almost one hundred years. The bridge is 819 meter long, the ... Open »
Sao Paulo
The bridge opening was held in 1892 and since that time the original construction of the bridge has been preserved in its initial look. A part of the construction, the bridge is made of, was purpose produced by the best engineers of Germany. The most popular and visited cultural establishment of the city of Sao Paulo is a famous pictorial art gallery named the Pinacoteca do ... Open »
Ilha Grande
The islanders had always protected their independence and they also were against a huge amount of immigrants who used to come to the island. The locals were suspicious about the visitors. They were afraid of epidemics (and it was reasonable). That’s why everyone who came from the Old or the New World had to spend at least five weeks in the infirmary’s quarantine zone. The ... Open »
Rio de Janeiro
Rio is home to numerous historical monuments. The city features some really unique natural attractions and widest choice of museums and galleries. An excursion to the rock called "Sugar head” (Pan de Asugar) is very popular among travellers. The height of the rock is 395 feet, and there are many interesting legends connected with its unusual name. Don’t forget to visit ... Open »
Asuncion
At the end of the 18th century, it belonged to one of the wealthiest Spanish colonizers. Today, an interesting museum is open within the walls of the historical mansion. It has gathered a diverse collection of exhibits dating back to the colonial period. Its visitors can see ancient weapons and important historical documents, garments from past centuries, and religious ... Open »
Montevideo
A historical part of Montevideo is of great interest for tourist visiting the destination. Exactly the historical part of the city concentrates a large share of significant landmarks and sights. A starting point of major sightseeing tours is the Plaza Independencia the suburbs of which host several architectural landmarks. The main decoration of the Plaza is the Cathedral, the ... Open »