Nature of Australia - national parks and reserves for active recreation 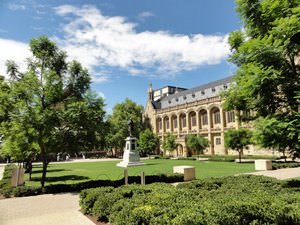 Australia is a State in the Southern Hemisphere occupying the smallest continent of the planet. It is located at the junction of two oceans – Pacific, and Indian. The territory of the country also includes the island of Tasmania, and several other small islands. Most of the continent is desert. The relief is represented by the Central lowland with depressions. On the elevated western platform lies the West Australian plateau. Along the east coast stretches the Great Dividing Ridge with steep eastern, and gentle western slopes turning into hilly spurs – downs. The lower mountainous range is the Eastern Australian Mountains. Australia is located in three climatic zones: subequatorial, tropical, and subtropical. When winter comes to the Northern Hemisphere, summer commences in Australia. The continent is dominated by a hot and dry climate.
Top chic accommodation you can find in the country
The luxury hotels in Australia, deserving attention of the most discerning traveler.
Read further
Many National Parks and Reserves have been created to preserve the unique natural wealth in Australia. The largest nature conservation territory of ​​the Country is Kakadu National Park in the Zone of Alligator Rivers. Almost half of its area is property of the Aborigines people. The Park contains preserved traces of ancient rock art. In the middle of cascading waterfalls and steep rocks dwell kangaroos, monitor lizards, buffaloes, and amazing plant species. To the north of Queensland is the Daintree National Park, an ancient rainforest that is more than one hundred million years old. The Park is divided into two zones, with extensive agricultural lands in between. The valley of the Daintree River has become a nesting site for rare birds. In the Park, you can see the famous Jumping stones, which have a sacral value for the indigenous people of Kuku Yalanji.
The Blue Mountains National Park is located in the most beautiful area of ​​the Great Dividing Range. Here, deep emerald plains with water bodies alternate with picturesque plateaus and cliffs. The Park is densely overgrown with forests, where among the eucalyptus and wood ferns along the sandstone canyons lay many hiking trails. From the observation platforms, the rock formation Three Sisters, the Royal Canyon, the Echo Gorge, and the calcareous caves of Genalan can be well surveyed. Surrounded by the cliffs of the Flinders Ridge, is located Flinders Ranges National Park with its mysterious gorges between ancient rocks, quaintly curved trees and huge boulders. The main treasure of the Park is the grand valley of Vilpena Pound. It is an amazing natural amphitheater framed by steep red-lilac cliffs. In the Park live emu, echidna, pink cockatoos, among others. The flora is represented by eucalyptus forests, cypresses and cassowaries. Copyright www.orangesmile.com
Most romantic hotels in Australia
The best hideaways for couples in love, as well as top hotels for wedding and honeymoon.
Read further
The most extensive protected area of ​​New South Wales is the Kosciuszko National Park, which is part of the Australian Alps. Its name is attributed to the highest peak of Australia, standing on its territory. Large glacial lakes, picturesque hills, pools with thermal waters attract more than two and a half million tourists every year. The reserve contains the riverheads of the Murray, Snowy, and Marrambiji rivers. There also live a rare mountain possum and a bright false toad. On the Kimberley Plateau is the Purnululu National Park, a true museum in the bosom of nature. It is crossed by the amazing Bungle-Bungle Range, surrounded by sandy plains, grass-covered lowlands, and limestone cliffs. As a result of prolonged erosion, the mountain range from the bright orange sandstone acquired an unusual shape resembling giant bee hives. 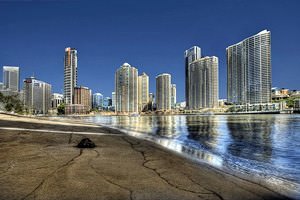 Uluru-Kata-Tjuta National Park is a vast desert area, named after the two giant hills. Both peaks are part of an underground mountain mass that breaks to the surface at their locations. The base of Uluru is dotted with numerous grottoes with rock-colored walls of red sandstone. During the rainy season, three small lakes fill the caves. In the western direction from Uluru there is Kata-Tjuta – a majestic domed summit with steep slopes. Along the Great Ocean Road on the territory of Victoria stretches the National Park of Port Campbell. On a narrow strip, the famous natural limestone sculptures are collected: a group of cliffs of the Twelve Apostles, a natural arch of London Bridge, etc. Tourists aspire to see the beautiful Loch Ard canyon.
Admire style in every aspect? Selection of the best design hotels in Australia
The developed hotel infrastructure of Australia opens wide scope for realization of the most stylish and unexpected projects in hotels of different …
Read further
On the island of Fraser is the Great Sands National Park, famous for its dunes and wet mangrove forests, “hanging” lakes, and swamps. In Lake Boemingen live freshwater species of turtles. In the Park you can meet dingoes. The east coast is covered by a white sandy beach. Cradle Mountain National Park – Lake Saint Clair on the Central Plateau Area of Tasmania is the most beautiful Park of the island. Tourists are attracted by; the broken silhouettes of the mountains of Cradle and Barn Bluff, Pigeon Lake with crystal clear water, alpine meadows, virgin rain forests and snow-white beaches. The famous six-day route Overland Track is passing through the park, allowing you to view all the spectacular views of the reserve.

National and city parks of Australia
♥   Regional Park 'Abbott Bay' . On the map

Famous places and sights of Australia 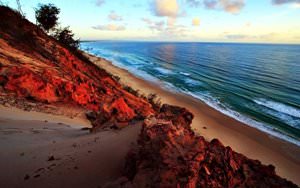 At the east coast of Australia there is the scenic Fraser Island. It became famous thanks to incredibly picturesque sand dunes. The coast is completely covered with white sand. Dense tropical forests lie in center. Some parts of the coast are shallow. These places are incredibly scenic; azure water together with white sand dunes form truly surreal landscapes. Fraser Island has another great feature; there are 40 freshwater lakes within its territory. Sometimes they are called the Hanging Lakes.

Travellers will be able to see one of the largest sandy beaches in the world on Fraser Island. The length of its coast is 100 km. There you can walk through the pristine mangrove and eucalyptus forests. The lakes are attractive, as they are inhabited by freshwater turtles. Another typical … Read all 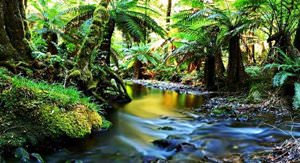 The State of Queensland also has the grand tourist attraction of national significance called Wet Tropics of Queensland. These extensive rainforests can safely be listed among the most beautiful in the world. Local places feature rich exotic vegetation and an abundance of picturesque rivers and waterfalls, mountains and valleys. The area of ​​tropical forests is 8 940 square km. A stroll there will be full of exciting discoveries.

The reserve is home to about 380 species of plants and more than a hundred species of rare animals, many of which can not be seen outside of the Australian continent. Among the main inhabitants of the rainforest, marsupials and bats have to be mentioned. The tropics are home to rare and incredibly beautiful butterflies. Researchers appreciate this place for … Read all
All unique sightseeing Australia

Cultural sights in regions of Australia

Sydney
Climbing the tower remains one of the most popular entertainments among tourists; to get to the observation deck you need to overcome more than a thousand steps. There is a more comfortable way to overcome the dizzy height, as the observation deck can be reached by elevator. The large-scale building houses several wonderful restaurants, a huge shopping center and an entertainment center with numerous attractions. Another great way to look at Sydney from a large height is to visit Royal … Read more

Melbourne
Among inestimable landmarks of Victorian age the building of the General Post Office, the building of Parliament House, the Town Hall and the famous Princess Theater are best worth noticing and visiting. The last landmark of mentioned above will be of great interest not only for genuine connoisseurs of architectural art but for dramatic art fans as well. The same impressive, remarkable and symbolic landmark of the city of Melbourne is The Myer Music bowl. It is a big open air platform by its … Read more

Brisbane
Queensland Museum features absolutely different collections of valuable artifacts. Among them you will find archaeological findings from the Stone Age, a collection of historical documents and many priceless works of art. A large part of the exhibition is open for public. Sir Thomas Brisbane Planetarium is also an important object of excursions. The planetarium is located near the city's business district. The opening of the planetarium took place in 1978. Today visitors of this place of … Read more

Perth
In the immediate vicinity of Perth is Karrakatta Cemetery, one of the most important historic monuments of Western Australia. In the cemetery, prominent political and military figures were buried, as well as artists whose works are known far beyond the borders of the country. The cemetery was founded in the late 19th century, and today it is of great architectural interest. One of the most unusual historical sites in Perth is the Old Fire Station. Founded in 1900, it became the first … Read more

Adelaide
Museum of Immigration is another striking cultural attraction. During the excursion in the museum visitors can learn many interesting facts about the life of immigrants who have come to the country from hundreds of different states. If you make a walk along the main streets of the city, you will see a luxurious mansion. That is Ayers House, a part of rooms of which has now been converted into restaurants and cafes. Fans of nature will certainly need to visit the local botanical garden. It was … Read more

Canberra
Currently the historic building is occupied by Museum of Australian Democracy. The collection of this museum is also very unusual. Among cultural institutions of the city we should also mention National Portrait Gallery. Several halls of the museum are dedicated to portraits of prominent figures of the country. An excursion in the gallery will please not only fans of painting, but also visitors who want to know more about history of the country. When it comes to time spectrum of works, here … Read more

Tasmania
Travelers who want to experience the culture and lifestyle of the indigenous population have to visit Davenport. It is home to the unique cultural center Tiagarra, which occupies a vast territory. Guests of the cultural center are invited for a walk around the countryside, where earliest settlements were based. There are numerous petroglyphs here, which are about 10,000 years old. The cultural centre also has a large-scale museum exhibition consisting of more than two thousand items. There are … Read more

Australia: Map of sightseeing in regions