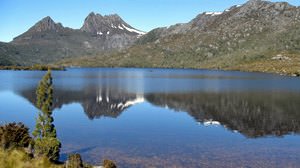 The history of Tasmania is extremely interesting; the island has been a place where convicts contained, so there are many specific attractions here. There are five historical sites of global importance on the island; the most famous among them is Port Arthur. Numerous curious stories and legends are associated with fort, as it is the darkest and the most mysterious attraction of Tasmania.
Authentic traditions, festivals and lifestyle of Tasmania inhabitants
Tasmania is famous not only due to its beautiful nature and interesting sites, but also because of its unique culture. Like many hundreds of years ago, there are still thriving craft …

Open
Coal mines, where convicts once worked, have survived too. Today they have tourist value only; a fascinating tour to mines would tell visitors about the island's colonial past. There are also old factories in Tasmania, the most famous and attractive among which is the Cascades Female Factory. One of the five most important attractions, the Probation Station, is in Darlington. The most famous monument of colonial culture is Brickendon and Woolmers Estates.
Travelers who want to experience the culture and lifestyle of the indigenous population have to visit Davenport. It is home to the unique cultural center Tiagarra, which occupies a vast territory. Guests of the cultural center are invited for a walk around the countryside, where earliest settlements were based. There are numerous petroglyphs here, which are about 10,000 years old. The cultural centre also has a large-scale museum exhibition consisting of more than two thousand items. There are priceless archaeological finds, as well as important historical documents. Copyright www.orangesmile.com
Your active city break in Tasmania. Attractions, recreation and entertainment - best places to spend your day and night here
Almost half of Tasmanian territory is occupied with wilderness areas, which are ideal destinations for fans of ecotourism. Tourists have an opportunity to go on a short tour to one of the …

Open
A huge number of historical buildings have survived in Hobart, so the capital of the island is ideal for hiking. Curious tourists would find it fun to walk around the area of Salamanca, next to which is there the major cultural center of the same name. It occupies a beautiful complex of buildings built of sandstone; the structure was originally used as a warehouse. The harbor is an attractive place to stroll, as it is the busiest place in the city. Near the harbor you can see the fabulously beautiful mansions in the Gregorian style. Battery Point is a very amazing place, as there are interesting monuments of the colonial era.

In the section below, you can get one of our excursion, activities or city discovery tours over Tasmania and surroundings. Our website offers 10-30% lower ticket prices, when compared to the offline purchase on the spot.

This guide to cultural sights Tasmania is protected by the copyright law. You can re-publish this content with mandatory attribution: direct and active hyperlink to www.orangesmile.com.
Tasmania - guide chapters 1 2 3 4 5 6
Reference information
Map of all palaces

Art enthusiasts should visit the Melbourne Arts Center – a grand complex consisting of several sites. One of them is the National Theater, where theatrical and opera performances are staged. Nearby are situated the Concert Hall “Hamer Hall”, and the open concert stage “Sydney Mayer Music Bowl”, where world famous music festivals are held. Sports fans can go to the Olympic Park, dedicated to the Summer Olympics in Melbourne in 1956. It is this event that made the city the sports center of Australia. The Park has preserved the atmosphere of the previous years. Today it unites arenas, swimming pools, tennis courts, and the “Melbourne Park” Sports Complex with the cricket stadium “Melbourne Cricket Ground”, basketball courts, and a skating rink. … Open 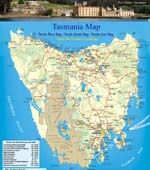 Photogallery of cultural heritage of Tasmania

Excursions over cultural sights of neighbours of Tasmania

Melbourne
Among inestimable landmarks of Victorian age the building of the General Post Office, the building of Parliament House, the Town Hall and the famous Princess Theater are best worth noticing and visiting. The last landmark of mentioned above will be of great interest not only for genuine connoisseurs of architectural art but for dramatic art fans as well. The same impressive, ... Open »
Canberra
Currently the historic building is occupied by Museum of Australian Democracy. The collection of this museum is also very unusual. Among cultural institutions of the city we should also mention National Portrait Gallery. Several halls of the museum are dedicated to portraits of prominent figures of the country. An excursion in the gallery will please not only fans of painting, ... Open »
Sydney
A perfect complement for cultural program will be a visit a local observatory, which is located in a historic building of the Astronomical Museum. The main part of the tour takes place in the evening, when visitors are offered to appreciate the beauty of the starry sky. At the daytime interesting and informative presentations are held in the observatory. Among the historical ... Open »
Adelaide
Connoisseurs of art are recommended to visit Lion Center, which has become the permanent venue of Fringe Festival. In you will find several exhibition galleries, a large cinema and a theater in the Arts Center. Fans of theatre art will be interested in visiting Festival Center. This is a unique Art Nouveau building, which was built in 1977. Its magnificent theater can ... Open »
Brisbane
Queensland Museum features absolutely different collections of valuable artifacts. Among them you will find archaeological findings from the Stone Age, a collection of historical documents and many priceless works of art. A large part of the exhibition is open for public. Sir Thomas Brisbane Planetarium is also an important object of excursions. The planetarium is located ... Open »

Culture guide to Tasmania. Which fascinating sights to visit once you are in Tasmania: temples, churches, museums, theaters and castles. Recommendations (with addresses, phone numbers and links) on the places 'must visit' in Tasmania. Plan your own city excursion by using this page info!