Cultural sightseeing in Antigua. What to visit - museums, temples, castles and palaces 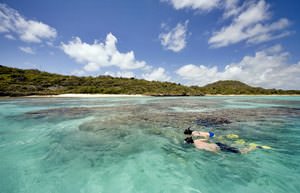 The Islands of Antigua and Barbuda were discovered by Christopher Columbus in 1493. They immediately struck travelers with their pristine beauty and bright colors of the sea, the softest fine sand and an abundance of greenery around. The colonists waged wars with local Native American tribes over the next several centuries. Peace has been established here only since the middle of the XVII century. Nature is the main wealth of the country until now. It provides a livelihood for its inhabitants. The country's authorities actively develop tourism and create the largest regional resort.
What to see and what to visit in Antigua with children
Antigua and Barbuda have kilometers of beaches with fine sand, a gentle dip in the water, colorful fish, and the sun almost all year round. There is …
Read further
The island of Antigua occupies a central place in public life and the development of tourism. This is where the main hotels, casinos, night clubs and restaurants are located. Barbuda Island is a huge coral reef. Only about 2% of the country's population lives on it. But one of the most beautiful beaches on the planet is located here. This is Long Beach. Traces of the long presence of the English are visible in everything here – from the names to the architecture and administrative structure. The island of Redonda also belongs to the land of the state. It is a volcanic rock. Its entire territory is given over to the territory of a Natural Park. Birds that live in a huge variety here have become the object of observations and studies by ornithologists from all over the world.
English Harbor is located on the southern coast of the island of Antigua. It represents the rich historical heritage of the islanders. "Nelson's Dockyard" is of great interest to tourists. This is the last harbor that has been preserved since the 18th century without reconstruction. The British squadron was based here in those days. The Harbor and surrounding areas are given over to the land of the National Park today. Copyright www.orangesmile.com
Shopping in Antigua - best shopping places, what to buy?
You can bring a lot of interesting souvenirs and goods, including food items to remember your trip. Antigua and Barbuda is part of the Commonwealth, …
Read further
Clarence House was built in the 18th century. It is a fine example of the Gregorian style. The summer residence of the Governor-General is located here today. The ancient, well-maintained Shirley Heights Fort is noteworthy. It was carefully restored. You should also visit the spacious “Dow Hill” visitor center. Fascinating lectures on the history of the island are regularly given in its premises. The dilapidated Fort Berkeley has long served as the protection of a cozy harbor. It is being restored today. The fort will be interesting both for fans of historical facts and just for fans of beautiful views, walking and exploring the surrounding area. 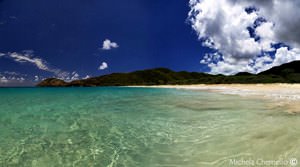 The horseshoe-shaped bay of Falmouth Harbor has become a place of attraction for visitors to the island in recent years. The town of Falmouth is located in its northern part. The Anglican Church stands on the road to it. It was built in 1676. The church is still active today. The old grace Fort George is located a little further away.
When and where to 'hang out' in Antigua - festivals and celebrations
Antigua and Barbuda is a tropical island country with a rich history. This affects the way of life, traditions, and holidays. The New Year is …
Read further
The city of St. Johns is one of the smallest capitals of the state in the world. About half of the country's population (30 thousand people) lives here. Tourist activity is limited to the Redcliffe Quay area and the Heritage Quay complex. Most of the buildings have been restored. But there are also picturesque abandoned mansions. Both of them arouse a keen interest among tourists and a desire to take a photo or buy a souvenir in a nearby shop. 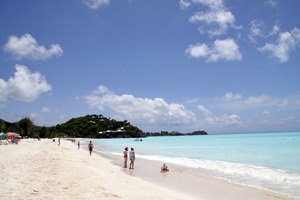 Almost mandatory place to visit is the cathedral. It was built in the neo-Baroque style in 1845 on the site of an older structure. Two towers towering on the sides of the structure have long become a recognizable symbol of the city. The cathedral is valuable as a striking example of rare mixed (wood and stone) architecture. The courthouse was built in 1747. The main museum of the state's history is located there today. Old wine shops located on the streets of Long Street and Market Street deserve special attention from tourists due to the antiquity of the building and a very good assortment. Redcliffe Quay is the best place to explore the city's panorama. It is located in its oldest district. Yacht moorings, the building of the theatre, and shops are located here. There is a farmers' market on the southwest edge of the city. Almost half of the residents gather here for the weekend. Someone offers, and someone buys the product. If you bargain, you can buy the freshest products and see the most incredible fruits here.
For active traveler - national parks, landscapes and nature of Antigua
The state of Antigua and Barbuda is located on several Islands. Antigua is the largest of them. It is treeless and mostly flat. Its highest point …
Read further
The town of Codrington is located on the island of Barbuda. It was the family domain of a noble English family once. The island was leased to the British government for a purely symbolic fee – 1 fat pig per year. Government House is the oldest building on the island. It was built in 1694. The building has successfully survived several centuries. However, a hurricane severely damaged it in 1995. Unhurried, like everything else in the country, work to restore the building is underway today. You can see the ruins of the Codrington family mansion north of the town at the highest point of the island. This is the "Mountain House", built around 1720. 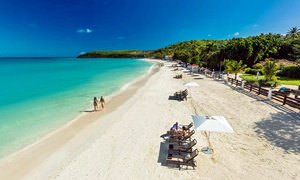 The island of Barbuda consists mostly of limestone. It is famous for its caves. The most visited of them are located on Castle Hill and at Two Foot Bay. Scientists have found drawings dating back to pre-Columbian times in one of the ancient caves. The caves are of great interest to amateurs and professional speleologists.

This article about cultural sites of Antigua is protected by the copyright law. You can re-use the content, but only under the condition of placement of an active link to www.orangesmile.com.
Antigua guide chapters 1 2 3 4 5 6 7 8 9 10

Famous sites of culture and history of Antigua in photoset

Culture and monuments in popular cities of Antigua

Jolly Beach
When describing religious landmarks of the island, it is important to mention the Cathedral of St. John the Divine that is open in St. John’s. The cathedral is a marvelous landmark of the colonial architecture. It also has an interesting history. The original church was in ruins after a devastating earthquake. However, it was rebuilt, and now visitors can admire the gorgeous building in its full glory. Holy Family Cathedral is one more interesting religious landmark of the island. It is … Read more

Long Bay
Another outstanding 18th-century monument is the English Harbor located in the south of the island. Now, these places are located within a vast national reserve where several more historic buildings have also been preserved. Walking around the harbor, one can see 200 years old structures made of stone. Some elements of decoration have partially survived here. One of the most valuable buildings is the 18th-century Leeward Islands Station. Just outside the capital, you can explore the … Read more