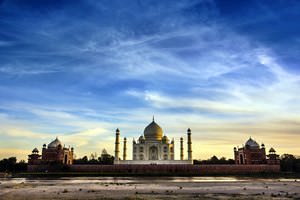 Taj Mahal is a unique historic landmark that brings millions of tourists to Agra. This spectacular palace was built in the first half of the 17th century. The Mughal emperor Shah Jahan commissioned it to immortalize his first wife who died while giving birth to their 14th child. The palace with the adjacent park is an incredibly beautiful and large complex. It was built from the most precious sorts of marble, and the most talented masters and painters created the intricate design of the Taj Mahal. A large landscaped park with spectacular fountains and thousands of exotic plants surrounds the palace. There are always many tourists and photographers in the Taj Mahal who always try to take the most attractive pictures of the famous landmark.
Your active city break in Agra. Attractions, recreation and entertainment - best places to spend your day and night here
In order not to limit your vacation plans to excursions to historic landmarks, consider visiting the most beautiful parks and gardens in Agra. Mehtab Bagh is recognized as the most beautiful …

Open
Besides the internationally famous palace, don’t forget to visit the legendary Agra Fort. This is another important attraction of the Mughal period. The main purpose of the giant architectural complex built from red bricks was to protect the area from alien invasions. The complex was rebuilt and expanded several times over the centuries. Today, almost the entire territory of the Fort of Agra is open for excursions. You can see a picturesque palace that once was an emperor’s residence and visit the emperor’s private rooms and halls that were used to host celebrations and important meetings. There are still an old mosque and merchant areas in the fort. This notable attraction is very big, and so it is better to dedicate the entire day to a visit to Agra Fort.
Jama Masjid is a fabulous mosque that is located in the historic part of Delhi. This is one of the most precious religious landmarks in the city. The construction of the mosque was finished in 1656. Jama Masjid is a precious attraction of the Mughal period. The mosque is built from sienna-colored limestone and has skillfully made marble cupolas. The shrine’s walls are covered with quotes from the Quran. Intricate details made from rare types of marble complete the unique design of the attraction. People practicing different religions are allowed to enter the mosque, not only Muslims. The most important: do not forget to take your shoes off before entering Jama Masjid and choose simple and non-revealing clothes for the excursion. Copyright www.orangesmile.com
Shopping in Agra - main shopping streets, outlets and boutiques
Colorful and loud markets, artisan workshops and jewelry shops are a true treasure for any fan of shopping in Agra. Take a stroll to colorful bazaars and shopping streets, breathe in the …

Open
There are several ancient Hindu temples in Agra, and they are also interesting to visit. For example, Shri Mankameshwar Mandir is located not far from the railway station. According to a legend, God Shiva himself established this temple. It is not clearly known when this temple was built because Shri Mankameshwar Mandir was rebuilt several times. Even the architectural style of this Hindu temple doesn’t give any details because the landmark is a combination of several architectural trends. Shri Mankameshwar Mandir has a spectacular artistic design. During an excursion here, visitors can see ancient artifacts made from silver, precious sorts of wood, and decorative stones. 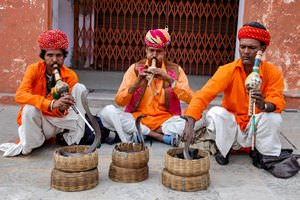 In Agra, tourists can also visit the main Catholic church in the country – the magnificent Akbar's Church. The construction of this attraction started in the 16th century. Mughal Emperor Akbar the Great ordered to build it. Akbar’s Church is a gorgeous and eye-catching example of Baroque style. The church became abandoned closer to the mid-18th century. Later, it was decided to reconstruct the building. After this, the church got decent classical traits but some elements of the original Baroque design have survived to this day. The church hosts ancient Christian artifacts. Join an excursion to the Church of Akbar to see interesting old elements of décor.
Guide to Agra sightseeing - things to see and to visit
Fabulous Agra. Many know this city as the home of the Taj Mahal, but this is not really correct because there are many other landmarks in this marvelous city. There are many must-see …

Open
The historic part of Agra lies to the west of the old fortress. This is one of the most attractive places for a stroll. Tourists can see many interesting buildings of different periods in this part of the city. Many buildings were transformed into artisan workshops and souvenir shops. The historic part of Agra is rich in attractions of the colonial period. Many tourists come to this part of the city to eat in numerous restaurants specializing in national food. 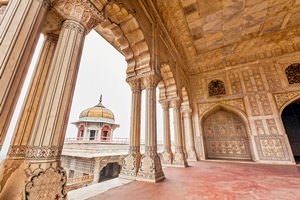 If you are interested in history, don’t forget to join an excursion to Sikandra. This is a large complex that houses several ancient tombs built for members of the emperor’s family yet at the beginning of the 17th century. Local farmers looted the tombs in the 17th and 18th centuries, stealing all precious artifacts. Some tombs lost even wall decorations. Nevertheless, the old constructions are still interesting to visit for all fans of history and architecture.
Family holidays with kids in Agra. How to entertain your child, things to show to children.
Agra is one of the best destinations for a vacation with children in India. In addition to outstanding historic attractions, the city is rich in amazing parks. Besides them, there are many …

Open
There are several important archaeological regions in Agra suburbs. For example, tourists can visit Fatehpur Sikri, a small city close to Agra that is mostly famous for its ancient ruins. A new and beautiful city was founded here by the order of the emperor at the end of the 16th century. The city was developing actively but soon a recession hit it, making the settlement deserted and forgotten.

In the section below, you can get one of our excursion, activities or city discovery tours over Agra and surroundings. Our website offers 10-30% lower ticket prices, when compared to the offline purchase on the spot.

City tours, excursions and tickets in Agra and surroundings

This guide to cultural sights Agra is protected by the copyright law. You can re-publish this content with mandatory attribution: direct and active hyperlink to www.orangesmile.com.
Agra - guide chapters 1 2 3 4 5
Reference information
Map of all palaces

Photogallery of cultural heritage of Agra

Excursions over cultural sights of neighbours of Agra

New Delhi
New Delhi offers its guests many exciting and remarkable places to visit. Cathedrals and mosques of ultimate beauty, ancient palaces and museums and many other spots of cultural significance will fit every tourist taste and fancy. Tourists should necessarily visit the Jama Masjid mosque. Its name can be interpreted as “flying in the sky”. This mosque is the largest one in ... Open »
Amritsar
Before entering the temple, everyone needs to perform the ritual purification in the sacral reservoir. Note that only people who practice Sikhism need to do this. Everyone else cannot enter the temple and is only allowed to admire it from the outside. A large square covered with marble surrounds the important Sikh shrine. Although there are always many people in the temple ... Open »
Ahmedabad
Textile manufacturing remains one of the main industries in Ahmedabad. Some of the oldest and most famous textile factories in India are open here. They produce various fabric types. Calico, an interesting thematic museum, is dedicated to the history and development of textile manufacturing in the city. Some of its exhibits are very valuable, for example, fabrics produced ... Open »
Islamabad
Fans of colossal monuments will find it exciting to visit a sculpture complex named Pakistan. This is one of the symbols of the country and true national pride. The monument symbolizes three territories of Pakistan and four provinces of the country. Unity and sacrosanctity are the core ideas of the eye-catching architectural landmark. The monument is designed in a shape of ... Open »
Bombay
Mumbai is a city of rich historical and cultural heritage. The landmarks and sights of this tourist destination will be of great interest to all the travelers. One of the most beautiful architectural landmarks of the city is the Victoria Terminus railway station. Its opening was held in 1882. The building of the station is executed in Gothic style and resembles a graceful ... Open »
Karachi
Karachi is also the location of one of the nation’s symbols – the Mausoleum of Muhammad Ali Jinnah that was built in the second half of the previous century. The complex includes a large building and a wonderful park surrounding it. The park occupies an area of more than fifty hectares. Near the mausoleum, there are tombs of the first prime minister of Pakistan Liaquat ... Open »

Culture guide to Agra. Which fascinating sights to visit once you are in Agra: temples, churches, museums, theaters and castles. Recommendations (with addresses, phone numbers and links) on the places 'must visit' in Agra. Plan your own city excursion by using this page info!