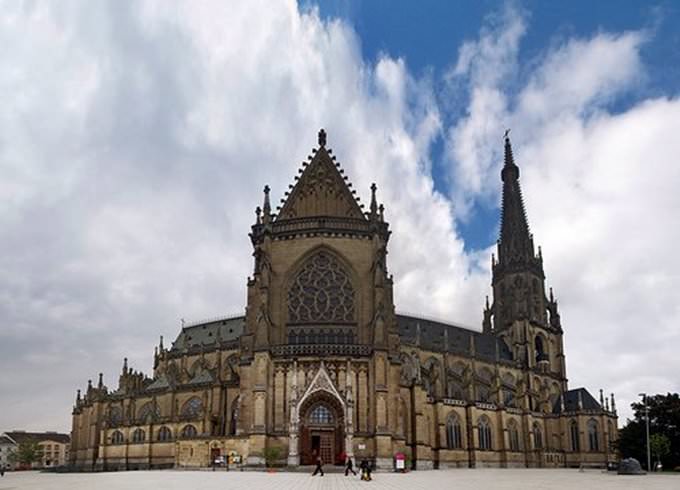 The main attraction of Linz is the ancient castle built in the 13th century. First fortifications had existed for only 200 years; in 1477 by the order of Frederick III the castle was completely rebuilt. Since then the castle’s appearance hasn’t changed significantly. Today the fortress is home to the Historical Museum, which introduces the history of Linz to its visitors. Among exhibits in the museum, there are unique archeological findings of the Neolithic, important historical documents, and old weapons, as well as household items and jewelry.
Guide to Linz sightseeing - things to see and to visit
Linz is a city that occupies the third position in the list of largest settlements of Austria. Here you will always see numerous buses with tourists and bright and picturesque places full of …

Open
Another interesting ancient monument is the Cathedral constructed in the 17th century by the famous architect Carlo Antonio Carlone. Since the first days of the cathedral and up to the present time the large organ has been its main decoration. Many eminent musicians have performed their music there. The fine cathedral is a true sample of the Baroque style, and the best landmark in Renaissance style is the Landhaus building.
In the early Middle Ages there was a monastery on this place; later the building was re-formed and government agencies settled down there. Travelers are sure to take a stroll through the corridors of ancient building and look into the inner courtyard, where there is a beautiful fountain with a bronze sculpture. The church of St. Martin is a unique landmark of Linz. It is the oldest religious building of the country; the church was first mentioned back in 799. In 1947 the complete reconstruction of the church was held; paintings dating back the early 15th century were restored by skillful painters. Copyright www.orangesmile.com
Family holidays with kids in Linz. How to entertain your child, things to show to children.
In Linz, vacationers with children will be interested in visiting the zoo Linzer Tiergarten. Everyone can take a walk along this zoo for free. There are many wild animals in the zoo …

Open
You can find a lot of interesting monuments and memorials in the city. The plague column of the Holy Trinity is a wonderful monument of Baroque architecture located on Hauptplatz. The monument was unveiled in 1723; it symbolizes the victory over the terrible disease.

Lots of interesting buildings can be seen near the central square. The most prominent among them is the town hall, a fine monument of the 16th century. Attraction of the later period is the New Cathedral; it was founded in the mid19th century. Many admirers compare this religious building with the famous St. Stephen's Cathedral in Vienna. For its beauty and luxurious design Linz Cathedral can compare to its Viennese predecessor.
OrangeSmile.com recommends best hotels in Linz ARCOTEL Nike , Rating 8,4
Cuisine of Linz for gourmet with top restaurants and cafe
There is a huge range of dining places in Linz. Many famous restaurants are serving customers for more than a dozen years and are known far beyond the borders of the city. The charming …

Open
The Landestheater welcomes guests of the city and locals, offering an interesting program involving symphonic music concerts or theater performances. One more institution perfectly suitable for spiritual enrichment is the Brucknerhaus where you can mainly enjoy classical music concerts and opera. Connoisseurs of contemporary art should schedule a visit to the Lentos Kunstmuseum, which has gathered a large collection of paintings, photographs, and sculptures. The building itself is interesting from the architectural point of view, being a masterpiece of modern architecture without which today's Linz can no longer be imagined. It was designed by Weber & Hofer and open to the public in 2003.

On the other side of the Danube, opposite the Lentos Kunstmuseum, is another architectural jewel - namely, Ars Electronica Center. For its functionality, permanent exhibition and modernity, this cultural facility is often referred to as the “Museum of the Future” (Museum der Zukunft). Concerning museum exhibits, it is worth noting that advanced technological developments, works of media art, as well as temporary exhibitions, are presented here to the public. The youngest visitors can find a children's science laboratory with lots of interactive exhibits. Of no less interest would be a walk along the waterfront in the evening when the Lentos Kunstmuseum and Ars Electronica Center are spectacularly illuminated.
Authentic traditions, festivals and lifestyle of Linz inhabitants
For more than twenty years Linz has been a permanent venue for the world's biggest festival of street art. Pflasterspektakel Festival takes place in the second half of July. For three days …

Open
The Landesgalerie keeps a collection of artworks by artists from Upper Austria, which makes the museum ideal for exploring the local culture. The former tobacco factory Japan Tobacco International presently houses the concert hall Tabakfabrik - it's certainly worth checking some upcoming events here. It is also noteworthy as an architectural creation, being the first construction in Austria to use steel frames. Most tourists would also be delighted with the Voestalpine Museum, thanks to which they can learn all about the region's metallurgical industry. It is also a great place for those who like taking pictures in an industrial style.

Another beautiful masterpiece of sacred architecture in Linz is Mariendom (The New Cathedral). Its construction was completed in 1862 under the supervision of Franz Joseph Rudiger. This is a magnificent building, next to which all people seem to be ridiculously small due to the style - Gothic. The cathedral is also remarkable with its interior, especially stained-glass windows depicting those who made their contribution to its construction. The window demonstrating the history of the city is of particular interest. Unfortunately, during the Second World War, several stained-glass windows did not survive. It was decided not to restore them but create new ones instead.
Your active city break in Linz. Attractions, recreation and entertainment - best places to spend your day and night here
In addition to a large spectrum of attractions, Linz boasts an abundance of entertainment options. Linz is especially popular among fans of shopping. There are some major shopping streets in …

Open
Connoisseurs of sacred art would be thrilled about visiting the city, as in addition to the above, there are several more beautiful temples in the city, and each one is worth a visit. These include Alter Dom, which is primarily attractive for its magnificent interior decoration with amazing stucco molding, sculptures, and an altar. The "Old Cathedral" was built in 1678 according to the project of the already mentioned architect Pietro Francesco Carlone. Ursulinenkirche built in the late Baroque style in 1772 is worth mentioning too. The most interesting artifact of the church is a beautiful baroque altar. One more interesting religious monument is Minoritenkirche built in the Rococo style and famous for its rich interior. 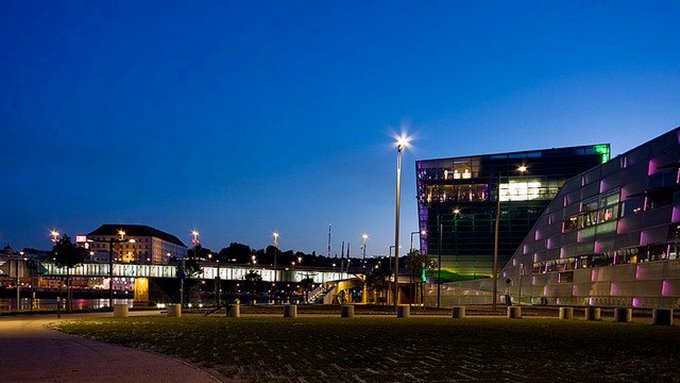 Wolfgang Amadeus Mozart stayed in a local mansion several times, and today it is available as a museum. For all fans of the great composer, this is a real gem that can be found only in Lina. For others, this is a great chance to get acquainted with the lifestyle of residents in the 18th century. As for observation platforms, special attention should be paid to Franz Josef Warte offering a magnificent view of Linz, the river Danube on which the city stands, as well as picturesque surroundings. Also, many tourists prefer to ride the Pöstlingbergbahn tram, at the final stop of which they can enjoy no less fascinating views of the city and its surrounding areas.

In the section below, you can get one of our excursion, activities or city discovery tours over Linz and surroundings. Our website offers 10-30% lower ticket prices, when compared to the offline purchase on the spot.

This guide to cultural sights Linz is protected by the copyright law. You can re-publish this content with mandatory attribution: direct and active hyperlink to www.orangesmile.com.
Linz - guide chapters 1 2 3 4 5 6 7 8

What to visit during two-day excursion in Linz

Cathedrals and basilicas near Linz
♥   Basilika Sieben Schmerzen Mariae, Linz-Pöstlingberg, 4.1 km from the center. On the map

♥   Katedrála sv. Mikuláše, České Budějovice, 76.2 km from the center. On the map Photogallery of cultural heritage of Linz

Excursions over cultural sights of neighbours of Linz

Salzburg
Salzburg is home to numerous unique historical attractions. The beautiful Hellbrunn Palace never ceases to attract tourists. The famous place of interest was built in the middle of the 16th century. Hellbrunn Palace is surrounded by a lush garden on all sides. By the way, on the territory of the garden are found several water springs. This important discovery has allowed the ... Open »
Vienna
Vienna has prepared to its guests widest choice of attractions and museums. Stadtpark City Park is simply a great place for a family rest. In the beginning of the 19th century several buildings existed on the territory of the park. However, already in 1860 the buildings were completely demolished. Best urban park architects and gardeners worked over the project of the park, ... Open »
Saalbach
The Church is built in Baroque style. The open balconies (χορός in Greek), rising strongly above the main nave, are a striking feature in the interior decoration. The nave is rather low. And the semicircular space for the balcony (χορός in Greek) is spacious and illuminated by long lancet window cut into the walls. The open balconies (χορός in Greek) are topped ... Open »
Graz
Graz has prepared a rich program full of excursions for its guests. Travelers should definitely not forget to visit Armoury Museum. The beautiful museum, which was one of the largest armories of the city several centuries ago, now stores approximately 30 000 priceless artifacts. Huge halls of Armoury Museum have become home to numerous guns, swords, lances, pistols, as well as ... Open »
Kaprun
The historical museum is hardly the only remarkable cultural facility. Each and every tourist would be interested in visiting the Automobile Museum housed in one of the city's most popular hotels. Its collection includes vehicles that were actively used 40-60 years ago. Many of the retro cars presented in the museum are in excellent condition and fully serviceable. The ... Open »

Culture guide to Linz. Which fascinating sights to visit once you are in Linz: temples, churches, museums, theaters and castles. Recommendations (with addresses, phone numbers and links) on the places 'must visit' in Linz. Plan your own city excursion by using this page info!