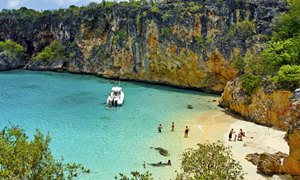 As of today, the total population living on the territory of the British Virgin Islands comprises of more than 32,000 people. In view of the rather complicated history of the formation of this administrative unit as a state, the population of the Virgin Islands is heterogeneous. Initially, its territory was inhabited by Indians and they spoke the Indian language. After the discovery of the islands by Columbus, the power over their territories was seized by the Spaniards, and they gradually began to drive out the Indians from their native land. Eventually, it was the Spaniards who formed the main ethnic group on the islands and the Spanish language prevailed when it comes to linguistics. After part of the islands came under the jurisdiction of the United States of American, and some under the jurisdiction of Great Britain, Americans and Englishmen emerged on the islands. In view of this, English language gained large prevalence. The descendants of slaves brought from Africa also constitute a significant part of the modern population of the British Virgin Islands.
State construction and political life of Virgin Islands British
The British Virgin Islands consists of 36 separate islands and belong to British overseas territories. The largest island is Tortola with an area of …
Read further
To date, English is recognized as the official language on the territory of the country. It is fluently spoken and about 75% of the registered local population considered it to be their native. The next commonest language is Spanish, which is considered to be the native language of about 16% of the local population. Please note that the commonest language on the islands is not classical Spanish language, but its Spanish-Creole dialect. Phonetically, it is not too different from the classical linguistic unit. The next important language spoken on the territory of the British Virgin Islands is French. As in the case of Spanish, the Franco-Creole dialect of the French language thrives in the country. Despite this diversity of language structures, all official literature is printed in English. Likewise, it is employed in teaching at schools, printing advertisements, as well as by mass media representatives. State meetings are also held and laws issued in this language too.
As for the religious situation in the country, there is greater unity and uniformity here. Nevertheless, the Virgin Island is a secular self-financing entity, with separation of Church and State. The predominant religion on the territory of the British Virgin Island is Christianity. This clearly shows the fact that there are no Indians, indigenous population anymore on the islands now. They have never belonged to such a faith. Most Christians consider themselves Protestants, and they account for about 36% of the local population of the islands. The second position is occupied by the Methodists, who account for 33% of the local population. About 17% profess the Anglican direction of Christianity, and about 10% consider themselves Catholics and conform to the Roman Universal Catholic Church. In addition, representatives of other world religions live on the territory of the Virgin Islands. However their number is so small that most of them do not even have religious formations. Copyright www.orangesmile.com
Virgin Islands British economy - strengths, wealth and problems
To date, the economy of the British Virgin Islands has been recognized as the most stable and prosperous among all countries that are part of the …
Read further
No matter that, there are sixteen inhabited islands in the archipelago, not all of them have holy sites for Christians. Many believers are forced to travel to other islands to visit temples, churches or monasteries. Perhaps this is why the local population does not consider it necessary to hold a general celebration of certain Christian events. According to statistics for the past year, less than 10% of the total number of believers visits the church more than once a month. As a rule, service in churches is held without the presence of parishioners, and the largest influxes of believers are recorded only on Easter. To date, about 3% of the local population who live on the island’s territory consider themselves atheists and do not support the idea of ​​the existence of God or other supreme forces that govern human life. Due to the fact that the Constitution guarantees everyone the right to free choice of a religious denomination, there are no confrontations and open hostility between representatives of certain beliefs and atheists.

This article about religions and languages in Virgin Islands British is protected by the copyright law. You can re-use the content, but only under the condition of placement of an active link to www.orangesmile.com.
Virgin Islands British guide chapters 1 2 3 4 5 6
Car rental on OrangeSmile.com

Tortola
Despite the fact that the vast majority of local residents belongs to the Christian denomination, many people still have faith in the jambis-spirits, which surprisingly does not come into conflict with Protestantism and Catholicism. Jambis cannot be considered exceptionally evil characters, even though they are. In the opinion of the islanders, the spirits are responsible for the failure and unhappiness. On Tortola from mouth to mouth are passed on legends about the feats of the spirits and … Read more