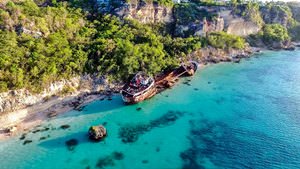 Despite the fact that the British Virgin Islands are a popular tourist country, the transport infrastructure on their territory is rather poorly developed. First of all, this has something to do with the fact that the territory of each island in the archipelago is quite small. Fairly complex terrain, especially on islands of volcanic origin, has also contributed to it. There is no public transport on the territory of the Virgin Islands. You can move on foot, by taxi or in a rented car. It is worth noting that the total length of roads is 200 kilometers, and generally, they have a hard surface. However, there are practically no markings and road signs. Movement in the British Virgin Islands is on the left side of the road. On major tourist islands, there are car rental points, but most cars are imported from the United States of America and have the steering wheels on the left hand side. Thus, traveling in them is very inconvenient. The roads here are very winding, often lead to dead ends, and pass through mountain ranges. In the rainy and hurricane season, the roads can be completely blurred.
Virgin Islands British sightseeing - top places to visit
Contrary to the American counterpart, the British Virgin Islands are less populated and less known among travelers. These islands are not cheap, but …
Read further
The air transport network in the British Virgin Islands is much better developed. The main international airport is considered to be Terrance B. Lettsome, which is located on the Beef Island. Also on several islands including Anegada, there are small air harbors that are designed for domestic interchange. With the help of helicopters, you can fly to any island in the archipelago. You can take a taxi from the airport to your motel or hotel. Most of the time, several cars are on standby in front of the terminal. They will take you to the necessary destination for $ 15-30 dollars. 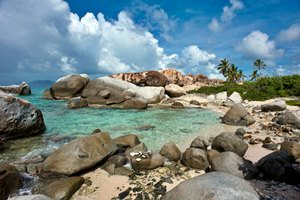 The main seaport is located in Road Town. It receives not only domestic ships, but also intercontinental cruise liners from the United States and Europe. Quite often, budget conscious tourists travel between the Virgin Islands on ferries, which cruise here almost every hour. The cost of the ferry ride depends on its class, the distance of travel and the availability of additional services. It should be noted that there are rental points of various water transport on the coastal lines. Here you can rent a boat, a boat, a yacht or a jet ski, with which you can, not only have fun, but also get to the necessary residential place.

Currently, four airports are operating successfully in the British Virgin Islands. The last one was opened in 2013. Two airports have low-quality runways without hard covering. Thus, they are not able to accept international flights and are used exclusively for the internal movement of tourists and local citizens. The main air gateway of the British Virgin Islands is Beef Island Airport. There is one small terminal on its territory, and the length of the runway with a hard surface is more than one and a half kilometers. Copyright www.orangesmile.com
Virgin Islands British economy - strengths, wealth and problems
To date, the economy of the British Virgin Islands has been recognized as the most stable and prosperous among all countries that are part of the …
Read further
You can get to the nearest city, which is located 10 kilometers from the airport, by taxi. They are usually waiting in the parking lot near the terminal. Some hotels and motels offer shuttle service to their visitors. Today, the airport employs more than 10 international airlines. However, local authorities try to prevent large airliners from entering their territory, which is why small passenger flights prevail here. Several times a week, flights depart from the island to various countries of the Caribbean region. The infrastructure of Beef Island Airport, despite its small size, is quite developed and provides everything necessary for passengers to have a comfortable relaxation. On the territory of the airport, there are bars and cafes, as well as restaurants where you can taste not only the colorful food of the islanders but also European cuisine. In the sales outlets, you can buy souvenirs, perfumes, spirits, tobacco products, as well as cosmetics. 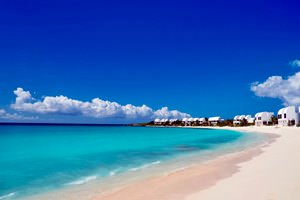 The next airport that is designed for international transportation is the Virgin Gorda Airport, located on the Virgin Gorda Island, near the city Spanish Town. The airport has one passenger terminal, whose runway length reaches up to nine hundred meters. The terminal’s infrastructure allows passengers to comfortably pass time while waiting for their flight. There are facilities for passengers with disabilities, a comfortable nursery, a cafe, currency exchange points, car rental outlets, international bank branches, and ATMs. 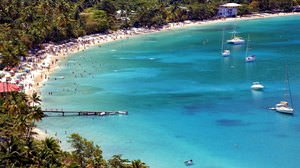 There is no public transport on the territory of the British Virgin Islands. But then again, despite this, tourists usually do not experience any difficulties with moving around settlements or between resorts. The territory of the islands is not too big and it is quite possible to walk to shops, markets or even cultural centers. The main terrestrial mode of transport is a taxi. You can catch a taxi right on the street or book one over the phone. Taxis often carry passengers without fixed tariffs, and there are not always meters in cars, so it is essential you agree on the cost of the trip in advance. Also, do not be surprised if along the way the taxi driver picks up more passengers, in order to completely fill the cab.
State construction and political life of Virgin Islands British
The British Virgin Islands consists of 36 separate islands and belong to British overseas territories. The largest island is Tortola with an area of …
Read further
For those who are accustomed to traveling by car, it is possible to rent a vehicle. However, it is worth considering that the movement on the British Virgin Islands is left-hand, and most of the cars in the rental offices have the steering on the left-hand side. Consequently, traveling is not always comfortable. The roads have a hard surface, but they are very meandering, and often go through the mountains. You will often come across very steep turns, ascents and descents. The maximum speed that can be built up within the residential area is 15 miles per hour. Beyond the residential area, you can accelerate to 30 miles per hour. In order to rent a car, you will need to acquire a special license, which costs about $ 10. At the same time, it is necessary to have an international driver’s license, and the driver must be older than 25 years. 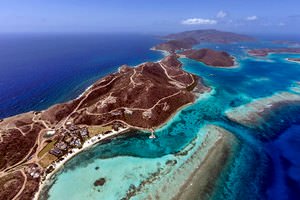 Traveling between the islands is very convenient on ferries, which regularly depart from the main port of the country in Road Town. The cost of the trip depends on the direction, the time of the year and the availability of additional services along the way. Once you lay your hands on a cruise liner ticket, you got a great chance to explore all the islands’ landmarks. There is the opportunity to rent yachts, boats and pleasure boats. Also, you can travel between the islands of the archipelagos by helicopter, since there are runways for it on any island. On the territory of the British Virgin Island, there is also an international air harbor, where tourists land from abroad. The airport is located on the Beef Island.