Detailed hi-res maps of Timisoara for download or print 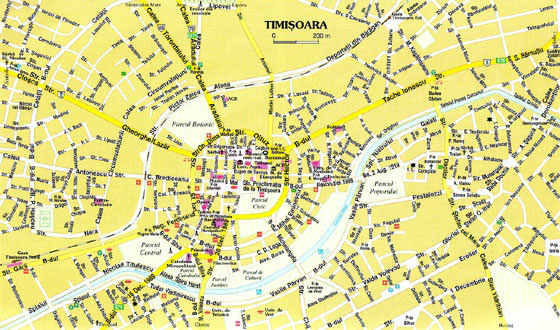 The actual dimensions of the Timisoara map are 1295 X 763 pixels, file size (in bytes) - 299671. You can open this downloadable and printable map of Timisoara by clicking on the map itself or via this link: Open the map.
Timisoara - guide chapters 1 2 3 4 5 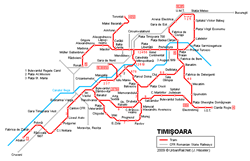 City tours, excursions and tickets in Timisoara and surroundings

Moving around in Romania - transportation

In the capital of the country, aside from buses, there are trolley buses and trams. Ticket inspectors often work on routes, so you should not overlook paying for the trip. There is also a metro station in Bucharest. To date, there are three branches that link the most important areas of the city with each other. The metro works from 5:00am and until 11:30pm. The interval between trains is 5-8 minutes. Nonetheless, it increases on weekends and holidays. It is possible to familiarize yourself with the underground interchange, thanks to information boards. … Open

The standard of living of citizens is significantly lower that of an average person in the European Union. However, the indicators show good growth every year. This year the average minimum wage is about 320 Euros. At the same time, the unemployment figures for the previous year are about 7.5%, and this figure is the lowest among all EU countries and in the whole European zone. However, according to statistics, the country’s population is rapidly decreasing, which cannot but have a negative effect on the country’s economy. Romania’s GDP is $162 billion and about $11,500 per capita. … Open

Search for services, infrastructure and sights on map of Timisoara

Our guide chapters over Timisoara

One of the most interesting cultural institutions of the city is the Banat Village Museum. The museum is a massive cultural open air complex; its main exhibits are old farm buildings, their age is about a hundred years. Beautiful pottery and wooden cabins were moved to the museum from various suburbs. The museum often hosts exciting recreational activities for guests. Visitors can witness colorful folk performances … Open

Tourists who prefer to spend time outdoors would be interested in visiting the Laurentiu Covaci Equestrian riding school. In addition to training, it organizes horseback riding through the most beautiful places of the city and its environs. As for nightlife, The Lobby Bar, Fratelli Lounge & Club and Eve Fashion Lounge clubs remain the most popular. Each of them is ready to offer visitors a fascinating entertainment. … Open

Those who are fond of vegetarian food would like the Bio Fresh restaurant resembling the classic old tavern with its design. A huge selection of vegetable dishes, branded pumpkin soup and an abundance of interesting sweets have made ​​Bio Fresh one of the most popular dining places in the city. Among distinctive features of the restaurant are attractive prices; if necessary, visitors can order a takeaway. A … Open

The Weiss Palace, built in 1912, is a bright architectural monument of the early 20th century. At the beginning of the 20th century, the Weiss family used to be one of the wealthiest in the city. Its members were major industrialists, doctors, and entrepreneurs. Currently, the historical palace is privately owned. Only a few rooms located on the first floor are open to the public. They are occupied by various … Open

2. One of the most convenient modes of urban transport is taxi; you can call it by phone or pick up at one of the parking site. It’s better to negotiate tariff in advance, however, it’s worth considering that local taxi drivers aren’t good in foreign languages. 3. Those who want to rent a car will need a standard set of documents and a credit card for deposit. Drivers should obey local traffic … Open

Start your observation of the city from a visit to the central square named Unirii. The square is surrounded by amazingly beautiful medieval buildings. Catholic Cathedral is surely the main decoration of the square. This cathedral was built in the beginning of the 18th century. Its magnificent design in the Baroque style perfectly reflects best traditions of medieval architecture. The local Orthodox Church is … Open

Maps of Osijek
Lace weaving is considered the region's traditional craft, which has not lost its relevance in modern times. Lace is used not only to design clothes but also to decorate interiors. Some Osijek workshops hold tours and masterclasses allowing visitors to firsthand observe the work of professionals. Besides the love for traditional crafts, the townspeople are also distinguished ... Open »
Maps of Debrecen
Arriving in Debrecen in early August, one can witness such an event as Katonazenekari fesztivál. At this time on Piac utca you can hear the sounds of fanfare and trumpets, as well as watch military parades. This is one of the most significant events in the city's festival life, and therefore such an event should not be missed. It introduces visitors to the local culture, ... Open »
Maps of Budapest
The main musical event in summer festival life of the republic already many years continue to remain Sziget passing in August on the metropolitan Old-Buda Island. It attracts about 400 thousand visitors annually. Hungarians are very proud of this festival, and consider it as their brand identity. The program of the Sziget Festival not just includes all musical styles, from ... Open »
OrangeSmile.com - online travel reservation expert providing reliable car rental and hotel booking services. We feature more than 25.000 destinations with 12.000 rental offices and 200.000 hotels worldwide.
Secure Server