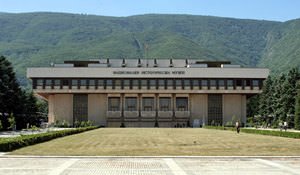 The historic district of the city strikes with an abundance of spectacular sights. Buildings of different eras have preserved in Sofia. There are also lots of museums in the city. Obligatory part of excursions is represented by the Royal Palace. In the second half of the 19th century, the execution of the national hero Vasil Levski took place there. For many years it was used as the headquarters of the Ottoman police and witnessed several important historical events.
Cuisine of Sofia for gourmet with top restaurants and cafe
You could find restaurants of any cuisine in Sofia. Travelers will enjoy local eating places and attractive prices. Among the most prestigious dining places the L'etranger international …

Open
Since 1887, the palace was the main residence of the royal family. Nowadays it hosts two outstanding cultural institutions, the Ethnographical Museum and the National Art Gallery. The Banya Bashi Mosque is an interesting landmark. Built in 1576 by ​​one of the most famous Turkish architect, it continues to operate for more than four centuries.
The red brick building can be seen even from remote areas of the city. Travelers can appreciate the appearance of the mosque and access its interior; in hours free of prayers entry is open to devotees of any religion. A lot of impressions will give a trip to the Ivan Vazov House Museum. This is where the internationally renowned Bulgarian writer lived and worked; in several rooms the situation of the early 20th century was restored completely. Among exhibits of the museum there is the collection of photographs and personal belongings of the writer. One of the most unusual exhibits is a stuffed dog Bobby that was a writer’s pet. Travelers fascinated by painting would like the National Gallery for Foreign Art. Copyright www.orangesmile.com
Authentic traditions, festivals and lifestyle of Sofia inhabitants
Local culture strikes with an abundance of beautiful customs and traditions, interesting festivals and rituals, many of which have pagan roots. An acquaintance with local culture is an …

Open
Collection of exhibits includes many treasures of world importance; works of little-known European artists are also represented in the gallery. One of the halls of the gallery is devoted to Indian culture; there visitors can see original ornaments and figurines of wood, paintings and engravings. The oldest building of Sofia is the St. George Rotunda. The building was built more than a thousand years ago; during its long history, it has been repeatedly destroyed and rebuilt. The last large-scale reconstruction was completed in 1998. In addition to the building, architects have managed to restore the part of adjacent Roman constructions.

In the section below, you can get one of our excursion, activities or city discovery tours over Sofia and surroundings. Our website offers 10-30% lower ticket prices, when compared to the offline purchase on the spot.

Plan your own excursion through Sofia: churches, museums and castles 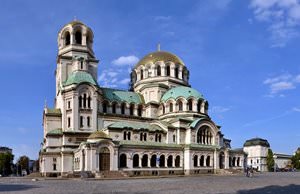 Facts:
» The St. Alexander Nevsky Cathedral is a cathedral dedicated to Russian soldiers who freed Bulgaria of the Turkish yoke. The cathedral was built by patriots of Bessarabia, Dobrudzha, Austria, and Russia.
»  In 1882, the first stone was laid. The construction lasted from 1904 to 1912. It had been named after Saint Cyrill and Methodius until 1920. The cathedral was declared a cultural monument only in 1924.
»  The building was designed by Russian architects I. Bogomolov and A. Pomerantsev. The cathedral was built and decorated with Russian and Bulgarian architects and artists. The iconostasis of the cathedral is decorated with two icons painted by V. M. Vasnetsov.
»  The Iveron Icon of the Mother of God in the pearl frame was donated to the cathedral by Aleksey I, a Russian patriarch.
»  The total area of the building is 2 600 m2, so it can accommodate about 5 000 people at the same time. The bell tower has 12 bells made in Moscow. The biggest bell weighs 12 tons. The sound of bells is heard even beyond the city.
»  Nowadays, the cathedral is the residence of Bulgarian patriarchs. It also appeared in two films: “Hitman” and “Ninja”. 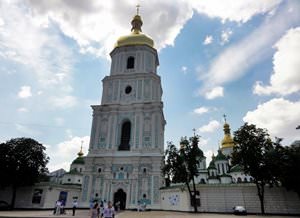 Facts:
» The Saint Sofia Church or the Basilica of Saint Sofia is the oldest church that has survived to this day. The first churches were built here already in the 3rd century. They were destroyed during barbarians’ raids. In 537, the Saint Sofia Church was reconstructed on the initiative of Emperor Justinian I.
»  In the late 16th century, during the Ottoman invasion, Turks turned the Orthodox Church into a mosque, built a minaret, and got rid of paintings. In 1858, the minaret was destroyed by an earthquake, so Turks rebuilt it into a warehouse.
»  The church was repeatedly restored in the 20th century and finally gained its original appearance. In 1998, the basilica was opened for parishioners.
»  During archaeological excavations, catacombs with graves were found under the building. You can also see the fragment of the painting of the first church.
»  In 1955, the Saint Sofia Church was declared a cultural monument. 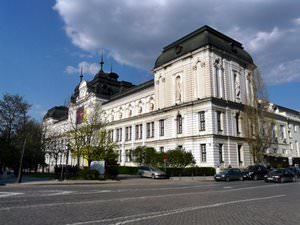 Facts:
» The National Gallery for Foreign Art houses the collection received from the National Art Gallery in 1985. The gallery was founded by the Fund of Lyudmila Zhivkova, the daughter of Todor Zhivkov. Many exhibits were donated from private collections.
»  The gallery occupies four floors of an old mansion. The collection of foreign art includes 10 000 exhibits.
»  In the halls, you can see paintings and sculptures of Western European masters: Rembrandt, M. Chagall, F. Giya, S. Dali, P. Picasso, and Roden.
»  The gallery houses over 200 works of Nikolai Roerich and his son Svetoslav.
»  Here, you can also see the big and interesting collection of different decorative items from Africa, Japan, India, and Asia. 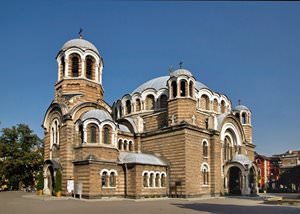 Facts:
» The Sveti Sedmochislenitsi Church, or Seven Saints Church, was built at the site of the Black Mosque in 1903. The mosque was called like this because its minaret was made of black marble. The Black Mosque was founded in 1528.
»  When Bulgaria became independent from the Ottoman Empire, it was abandoned and dilapidated. The Christian Church was rebuilt on the initiative of A. N. Pomerantsev. A bell tower with four bells was constructed. The church was consecrated in honor of St. Cyril and Methodius and their followers: Savva, Clement, Nahum, Angelar, and Gorazd.
»  When the church was rebuilt, the excavations were conducted. Under the foundation, the fragments of an old Christian Church dating back to the 5th century were found. Also, the fragments of Asklepion, the temple of the Roman god of medicine Asklepios where people were treated, were found here. 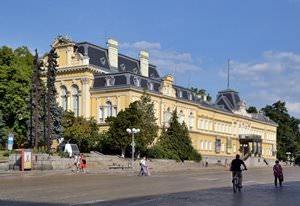 Facts:
» The National Art Gallery is located in the former residence of Prince Alexander of Battenberg. It was built in 1873. Pieces of art started to be collected in 1892. The sector in the Archeology Museum was allocated for them.
»  When the collection was big enough, an art gallery was opened. In 1952, the gallery occupied some rooms in the palace.
»  The collection includes paintings and sculptures of Bulgarian National Revival artists (1878).
»  Medieval icons that are real treasures of the gallery are kept and displayed at the St. Alexander Nevsky Cathedral.
»  The gallery houses 50 000 works made by 3 000 Bulgarian masters.
»  The National Gallery also includes home-museums of artists Vera Nedkova and Nikola Tanev and sculptor Ivan Lazarov.

This guide to cultural sights Sofia is protected by the copyright law. You can re-publish this content with mandatory attribution: direct and active hyperlink to www.orangesmile.com.
Sofia - guide chapters 1 2 3 4 5 6 7

What to visit during two-day excursion in Sofia

Art galleries in Sofia and around
♥   Art museum 'National Archaeological Museum' Sofia, 1.6 km from the center. On the map

♥   Art museum 'National Gallery for Foreign Art' Sofia, 2 km from the center. On the map

Photogallery of cultural heritage of Sofia

Excursions over cultural sights of neighbours of Sofia

Bansko
There are also several interesting cultural centers, a visit to which will make any vacation even more interesting. Curious travelers should definitely visit the House - museum of Neophyte Rilski. Built in the 18th century, it has become a monument of the national importance. A lovely villa converted into a museum exhibits a rich collection of antique furniture, art objects, ... Open »
Plovdiv
Roman Stadium is a no less interesting landmark of the antique times. The gorgeous stadium was built in the 2nd century B.C.E. It is open in the heart of Plovdiv and surrounded by beautiful architectural landmarks of different epochs that look absolutely gorgeous with modern illumination. Despite the fact that there are buildings of different styles in the center of the city, ... Open »
Skopje
As many years ago, the main decoration of the church is the elaborately engraved iconostasis. At first glance, church seems small, but the fact is that a large part of the structure is covered with soil. In the 17th century the majority of the population of the city was Muslim, so the Orthodox Church shouldn’t be higher than city's mosques. Next to the church begins the ... Open »
Kavala
St. Lydia's Baptistery is one more church that definitely deserves a visit. The shrine is located not far from the city of Philippi. The history of this church is also connected with Paul the Apostle. It is believed that the first baptism in the region, and in Europe as well, happened on the site of the church. This is one more fact that locals are proud of. Paul the Apostle ... Open »
Thessaloniki
The Church of Saint Demetrius is one of the most remarkable religious sites of the city of Thessaloniki. The first religious construction on a place of the church was erected in the 5th century. However it stood only for two centuries and was badly damaged with a powerful earthquake. Afterwards the construction was many times restored and ruined each time significantly changing ... Open »
Thassos
Next to Limenaria a number of antique Turkish buildings are located. If you like excursions, it's worth to visit the Church of Assumption in Panagria. There are some unique artifacts being stored there including Crusaders banner and 14-17th centuries icons. Potamia village is located in the mountainous area of Thasos. It is known as the origin of famous artist Polygnotus ... Open »

Culture guide to Sofia. Which fascinating sights to visit once you are in Sofia: temples, churches, museums, theaters and castles. Recommendations (with addresses, phone numbers and links) on the places 'must visit' in Sofia. Plan your own city excursion by using this page info!