Printable maps of Seefeld in Tirol 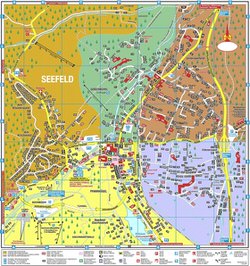 Interactive maps of hiking and biking routes around Seefeld in Tirol

1. You can zoom in/out using your mouse wheel, as well as move the map of Seefeld in Tirol with your mouse.
2. This interactive map presents two modes: 'Biking Routes' and 'Hiking Routes'. Use the '+' button on the map to switch between them.


Railway and landscape maps of Seefeld in Tirol area

This Seefeld in Tirol map has two modes: 'Railway Network' and 'Landscape & Rural Map'. Use the '+' button on the map to navigate.

Railway communication in the country is great, so trains are considered the most popular mean of transport among the local population. Based on the level of comfort, train lines are divided into the first and second class. In the first case, the space in the compartment is much larger, the number of seats is reduced and there is a folding table. The seats in the trains are soft and comfortable. In the second class of trains, there are more seats and less comfort during a ride. The cost of a trip apart from the class of the train will also be affected by its type. Long-distance trains are considered to be the fastest, followed by regional ones, and standard commuter trains. … Open

Nature and parks of Austria

Photos of picturesque Austrian landscapes are amazing. The nature here is really diverse, and the animal world has almost the same species as in neighboring Germany, which, in turn, is much larger in size. There are diverse geographical landscapes, including mountain peaks, meadows and fields, steppe lakes and much more at a relatively small area. The height above sea level in different parts of Austria is also significantly different, which contributes to the emergence of different climatic zones. All these features have significantly influenced the mentality and life of ordinary citizens of this state. Since ancient times, they have learned to live in peace with nature, so now the country has a huge number of national parks, reserves, and simply beautiful places. … Open

Photogallery of Seefeld in Tirol sights

Our guide to Seefeld in Tirol

Many travelers know the municipality of Seefeld as the best winter recreation center in Tyrol. The popular ski resort has attracted travelers for more than a hundred years. In 1964, 1976 and 2012 it was the venue for Winter Olympic Games, and in 1985 Seefeld was chosen for holding World Ski Championships. The modern resort features a well-developed infrastructure, which concerns not only sports but also hotel … Open

Cultural excursion through Seefeld in Tirol - things to see

The popular Austrian resort has gained popularity of tourists thanks to the developed sports infrastructure. However, its unique historical heritage should also be given due attention. The main historical symbol of the city St Oswald's Church (Seekirchls St. Oswald). Built in the 15th century, it is a vivid example of the Gothic style. The Catholic church is located in the very heart of the city. Hundreds of years … Open

Fine Alpine-style hotels are one of the main attractive features of Seefeld. Each one is trying to surprise guests with original services and infrastructure elements. One of the most upscale in the resort is fashionable Relax & Spa Hotel Astoria Hotel located in a picturesque park. The main element of its infrastructure is a spa covering an area of 2,000 square meters. Besides a huge selection of massage and … Open

Winterski in Seefeld in Tirol

The official opening of the ski season falls on the first half of December in Seefeld, while the highest mountain routes remain available for skiing until early March. Guests of the resort are guaranteed a comfortable rest thanks to the abundance and variety of ski lifts allowing vacationers to easily reach any area of interest. In total, the resort operates more than 25 lifts, one of the most popular among … Open

Maps of Innsbruck
Innsbruck is a world famous ski resort, due to the fact that it served as the capital of the Winter Olympic Games twice. After that, Innsbruck has become even more attractive and prestigious, sophisticated tourists call it the perfect place for winter outdoor activities. If you are the real fan of active winter activities - Innsbruck must be your paradise, as far as here you ... Open »
Maps of Garmisch-Partenkirchen
And to get acquainted with Weinachtsman's "helpers", go to Auf der Pirsch nach Hirsch where deer live. A visit to the farm will be nice in itself, but if it happens on Christmas eve along with the youngest citizens, it will definitely be remembered as a good memory for a long time. One more interesting pastime awaits children in Sommerrodelbahn am Skistadion ... Open »
Maps of Fulpmes
There is an ice rink, swimming pool and two dozen tennis courts in the town. There are four indoor tennis courts. You can play in any weather here. You can go to the cinema or try to understand the rules of Curling. It is also possible to go to the gym or try yourself in paragliding. You can go sledding in the winter months. It is possible to go on a route around Fulpmes ... Open »
Maps of Tirol
Tirol can be visited at any time of year. Winter alpine landscapes attract fans of skiing; in warmer months there are lots of excursion fans and ecotourists here. The region offers excellent facilities for leisure, and those fond of relaxing could find a suitable place to rest. Fabulously beautiful alpine landscapes of the region are perfectly complemented by fascinating ... Open »
Maps of Solden
However, you should not think that this resort is designed exclusively for novice athletes. There are also extremely interesting black trails and good opportunities for freeriding here, especially after heavy snowfall. There are queues at the lifts at the height of the season. However, it is usually less crowded on Giggijoch. In addition, an interesting snow park with a ... Open »
Maps of Mayrhofen
You might think that there is absolutely nothing to do outside of the ski season in Mayrhofen. This is not true. There are few tennis and squash courts, a fitness center, saunas, and baths here. Local night clubs organize incendiary discos all year round. And most importantly, more than sixty kilometers of hiking trails are laid near the city. You can find everything from ... Open »
Maps of Kitzbuhel
Ellmis Zauberwelt is another interesting place in Kitzbühel where you can ride a cable car, try zipline, climb ropes, and finally relax in a bar. As well as admire some interesting figurines of fairy-tale characters who seem to protect the amusement park. Tourists looking for swimming opportunities should be recommended Panorama, a well-groomed and always clean swimming ... Open »
OrangeSmile.com - online travel reservation expert providing reliable car rental and hotel booking services. We feature more than 25.000 destinations with 12.000 rental offices and 200.000 hotels worldwide.
Secure Server