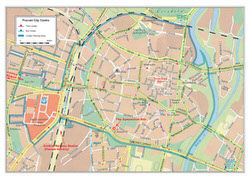 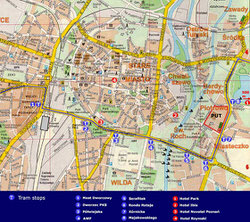 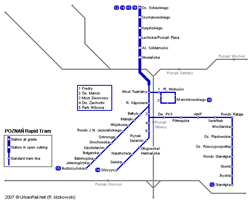 Interactive maps of hiking and biking routes around Poznan

1. You can zoom in/out using your mouse wheel, as well as move the map of Poznan with your mouse.
2. This interactive map presents two modes: 'Biking Routes' and 'Hiking Routes'. Use the '+' button on the map to switch between them.

This Poznan map has two modes: 'Railway Network' and 'Landscape & Rural Map'. Use the '+' button on the map to navigate.

The next airport that is near Warsaw is Modlin. It was built specifically to relieve the main Polish airport. From the terminal to Warsaw is not more than forty kilometers. Regular public transportation plies this route. The airport is very comfortable and convenient. A full-fledged European service is available for every passenger. At the same time, the air harbor serves about 7,000 passengers daily. The next major international airport is Krakow Balice, named after John Paul II. It also has a maximally developed and thoughtful infrastructure. There is a Wi-Fi network which is available in the free mode only for the first 15 minutes. You can eat here in small cafes, and in colorful local restaurants. Also on the territory are ATMs, currency exchange points, duty-free shops, and souvenir shops. … Open

Nature and parks of Poland

The third of the Polish territory is occupied by forests that are protected by the state. In this country, people highly value the nature and take a full range of measures to preserve it. The northern part is located on the picturesque coast of the Baltic Sea. The Sudeten and the Carpathians mountains are to the south. There are 23 national parks in Poland. The protected areas include the Augustow Forest and the Red Forest. The Augustow Forest is a virgin place that consists mostly of centuries-old pine and fir trees. There are many picturesque lakes and a huge number of various animals. The Red Forest is characterized by hilly terrain and numerous lakes. The largest of them is Vishtynetskoe Lake. The territory of the forest is inhabited by reindeer, roe deer, wild boar, beaver, raccoon dog, lynx, and wolf. … Open

Our guide to Poznan

Traditions and mentality of Poznan

The Poznan’s holiday calendar involves various festivals and celebrations. Every year there are different cooking events, festivals of art in the city and also important historical dates and trade fairs. One of the youngest and interesting celebrations is Festival of good taste, this gastronomical festival is celebrated in the middle of August. The basic part of entertaining events go off at the Market Square, … Open

The Imperial Castle built in 1910 for the German Emperor Wilhelm II is an outstanding architectural monument. The construction of the chic palace in the neo-Romanesque style required huge costs and the most modern and beautiful materials of that time. The unique historical building presently houses a multifunctional cultural center with a cinema, exhibition halls, a puppet theater and a restaurant. A walk in … Open

5. It is important to remember to give tip for the good service in the local restaurants and cafes, to do this you need to add 10% to total sum. In small cafés and budgetary restaurants tip can be about 1-1,5 euros from the person, also it is normal just to approximate total sum to any bigger sum. 6. Economical travelers need to remember that during various trade fairs and festivals almost all … Open

Peculiar gastronomical sights of Poznan are so-called “milky bars”. They are very popular among tourists and youths, they represent small budgetary cafes, where it is possible to buy ordinary dishes at the normal price. So, the full order involving three dishes will cost cheaper than 5 euros. The main dishes of milky bars are sandwiches and patties, various types of kasha and omelets and, of course, milky drinks. … Open

Poznan is very popular not only among the trips lovers, but also among the travelers who prefer sportive entertainments. One of the most essential resting places for Poznan’s guests is sportive complex Malta Ski, which offers its guests the real unique amusement. Even in summer it is possible to ski here, excellent sportive ground is constructed in open-air. Malta Ski center is located on the territory of … Open

Poznan is the city with rich cultural and historical heritage. The great number of stories and legends are connected with every square and building of the city, one of the notable monuments of architecture is the building of Biblioteka Raczynskich. Famous Italian architect worked with project of this building, and Louvre became example for this building. This classic building with columns looks very impressive, also … Open