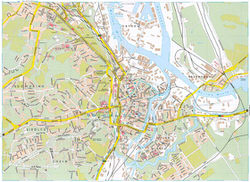 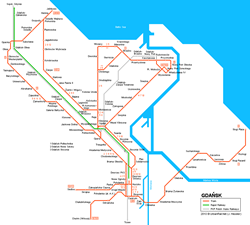 Interactive maps of hiking and biking routes around Gdansk

1. You can zoom in/out using your mouse wheel, as well as move the map of Gdansk with your mouse.
2. This interactive map presents two modes: 'Biking Routes' and 'Hiking Routes'. Use the '+' button on the map to switch between them.

This Gdansk map has two modes: 'Railway Network' and 'Landscape & Rural Map'. Use the '+' button on the map to navigate.

The next airport that is near Warsaw is Modlin. It was built specifically to relieve the main Polish airport. From the terminal to Warsaw is not more than forty kilometers. Regular public transportation plies this route. The airport is very comfortable and convenient. A full-fledged European service is available for every passenger. At the same time, the air harbor serves about 7,000 passengers daily. The next major international airport is Krakow Balice, named after John Paul II. It also has a maximally developed and thoughtful infrastructure. There is a Wi-Fi network which is available in the free mode only for the first 15 minutes. You can eat here in small cafes, and in colorful local restaurants. Also on the territory are ATMs, currency exchange points, duty-free shops, and souvenir shops. … Open

Nature and parks of Poland

The third of the Polish territory is occupied by forests that are protected by the state. In this country, people highly value the nature and take a full range of measures to preserve it. The northern part is located on the picturesque coast of the Baltic Sea. The Sudeten and the Carpathians mountains are to the south. There are 23 national parks in Poland. The protected areas include the Augustow Forest and the Red Forest. The Augustow Forest is a virgin place that consists mostly of centuries-old pine and fir trees. There are many picturesque lakes and a huge number of various animals. The Red Forest is characterized by hilly terrain and numerous lakes. The largest of them is Vishtynetskoe Lake. The territory of the forest is inhabited by reindeer, roe deer, wild boar, beaver, raccoon dog, lynx, and wolf. … Open

Our guide to Gdansk

Some hotels in Gdansk have the status of outstanding historical sights, and among them is the prestigious Radisson Blu Hotel Gdansk. Occupying a building of great architectural value, the hotel is located in the very center of the Old Town. The size of her standard hotel rooms starts from 30 square meters. Guests will also have the opportunity to stay in one of its chic luxury rooms which have an area of ​​55 … Open

In summer, Jelitkowo Beach is the favorite vacation spot for townspeople and tourists. This is a spacious beach with soft sand which is ideal for relaxing with children. This beach is very small, so it is especially popular among tourists with children. It will be interesting to visit it not only in summer, but also in autumn or late spring. On the coast, you can arrange a family lunch or dinner outdoors, or you … Open

The interior of the Gryfhotel incorporated the most beautiful design traditions from different ages. Its rooms are decorated in a subtle aristocratic style; they have beautiful carpeting and very cute wallpapers that recreate the style of the first half of the 20th century. Furniture made from natural wood and upholstered with fabrics of noble shades complement the decor. The public areas of the hotel are decorated … Open

The largest and most popular shopping center in Gdańsk is Galeria Baltycka. Those who visit it for the first time, should take an information leaflet at the entrance, otherwise it won't be easy to find the desired store at all. The center presents more than 200 clothing and footwear stores of various stylistic trends, sports accessories, health beauty items. A large choice of children's clothing stores is also … Open

A real historical symbol of Gdansk is the Hotel Gdańsk, which occupies the building of a former granary, which was built in the 18th century. During the reconstruction, the architects were able to partially preserve the building’s old finish and as a result, today you can see wooden beams under the ceiling in some rooms, just as massive wooden pillars were preserved in public areas. Some of the luxurious rooms … Open

5. Fans of shopping are recommended to visit the city in the beginning of August. This is the time when Gdansk hosts the famous St. Dominic Fair. The fair lasts three weeks and is accompanied not only with numerous sales, but also with interesting cultural events. 6. Bus remains the most popular form of public transport. You can easily reach any area of the city by using a tram. A ticket for one … Open