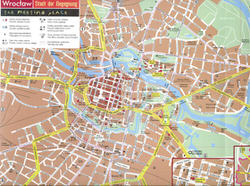 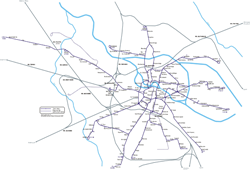 Interactive maps of hiking and biking routes around Wroclaw

1. You can zoom in/out using your mouse wheel, as well as move the map of Wroclaw with your mouse.
2. This interactive map presents two modes: 'Biking Routes' and 'Hiking Routes'. Use the '+' button on the map to switch between them.

This Wroclaw map has two modes: 'Railway Network' and 'Landscape & Rural Map'. Use the '+' button on the map to navigate.

The roads in Poland are simply great. Hence, many tourists choose to rent cars. You can do this either at the city agency or at the airport terminal. You will need to show an international driver’s license for this. However, it will not be convenient to move around a large city in a rented car. Firstly, there are strict restrictions in the country. The maximum speed limit in the city in the afternoon is 50 kilometers per hour and at night, 80 kilometers per hour. Please note that there are often big traffic jams in tourist cities. In such a situation, it is faster and cheaper to move on foot or by public transport. Between cities however, you can travel on a rented car. It is worth stating that it is permissible to drive at a speed of up to 130 kilometers per hour on modern highways. Many rivers and waterways flow in the country, and you may find boats running through them. However, this is not a means of transportation but rather, tourist entertainment. Tourist liners, cruise ships and boats, as well as small yachts run on the coast of the Baltic Sea also in the warm season. … Open

Overview of festivals and celebrations in Poland

Poland is a deeply religious country, and therefore, its residents have a special attitude towards such holidays as Christmas and Easter. The whole family gathers at the festive table on the Christmas Eve. There is always a white tablecloth and a small piece of hay. The table is served to have a place for guests who can unexpectedly enter the house to celebrate. The feast begins when the first star appears in the sky. Then, a candle lights up in the house. People sitting at the table say a prayer and start eating a meal consisting of 12 lean dishes. On Christmas Eve, it is common to exchange thin plates of dough, which you need to buy in the church. It is believed that they are the wishes of happiness and good. The next day, December 25, the Poles go to visit each other and exchange gifts. … Open

Our guide to Wroclaw

Among the natural attractions of Wroclaw, it is worth highlighting the Japanese Garden, which was founded in 1913, before the World Exhibition. In the war years, this beautiful garden was completely abandoned and remained in desolation until 1994, when it was decided to restore it. High class gardeners from Japan helped to decorate the garden. Today, except ornamental plants and flowers, in the garden you can see … Open

Yet another outstanding building with a centuries’ old history, is located near the Market Square. We are talking about Hotel Monopol Wrocław. The main feature of the hotel is its ultra-modern design, complemented by the preserved items of the original decoration. You can find elegant designer furniture, huge windows that completely replace the external walls, an integrated system of artistic lighting and … Open

Wroclaw for children - what to visit

The Aquapark Wroclaw is an excellent place to relax with the whole family, and is accessible all year round. The main part of the pools and attractions of this water park is equipped in a covered pavilion, and in summer, an excellent recreation area is equipped outdoors. On the adjacent territory of the water park, there are also classical playgrounds for children with swings and slides. The presence of a cozy … Open

On the territory of the historical district of Wroclaw is located one of the most stylish apart-hotels of the city, Apartament24. It occupies a very impressive building with centuries-old history. Each of its 15 rooms has a prevalence of white color and an amazing interior brought about by colorful accessories of various shades: interesting pictures and mural paintings, exquisite fabrics and pieces of furniture. … Open

In the beautiful modern skyscraper, whose height is 212 meters, Sky Tower Wroclaw shopping center settled down. It occupies several floors of a high-rise building and units shops of the most famous and popular world brands. The most affluent townspeople and guests of Wroclaw make purchases here. Trendies will surely be delighted with a variety of designer boutiques, cosmetics and perfumery stores, and elite jewelry … Open

Hotels with history of Wroclaw

On one of the picturesque streets of Old Town, there is a mini-hotel called SleepWalker Boutique Suites. This place offers customers 9 charming rooms and apartments to choose from. Their interior is a true embodiment of ancient traditions. Chic wallpapers and vintage style lamps, incredibly beautiful wooden furniture decorated with handmade carvings, satin fabrics in rich colors and carefully restored interior … Open