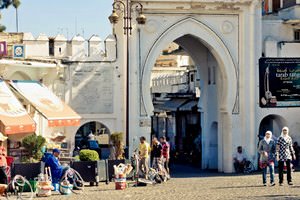 Medina's main sights are world-famous Muslim shrines attracting pilgrims from all over the world. The main symbol of the holy city is Al-Masjid an-Nabawi, a mosque famous in legends. According to one of them, the first Islamic temple was founded on this site during the time of the prophet. The first mention of the world's oldest mosque dates back to 622. It is striking with its impressive scale and decoration. A spacious courtyard formed in the mosque can accommodate several thousand believers during major religious holidays.
Your active city break in Medina. Attractions, recreation and entertainment - best places to spend your day and night here
Medina is the largest pilgrimage center in the world. For this reason, the city cannot offer a variety of entertainment venues. Nevertheless, its guests can diversify their leisure …

Open
All other Muslim temples in the world were built in the likeness of the main mosque, which has a lot of interesting architectural features. In total, the construction has 10 minarets, the maximum height of which is 104 meters. Many people recognize the world's main Muslim temple by its original green dome. This dome has a very interesting meaning: according to historical data, the prophet's tomb is located under it. Besides the Prophet Muhammad, the mosque became a burial place for some Muslim caliphs, in honor of which important celebrations are held every year.
For Medina residents, the mosque has long ceased to be just a sacred monument. At certain times, a school was located within its walls, important city meetings and traditional holidays were held in the courtyard of the mosque. Every ruler of the city sought to bring something new to the building's appearance, and that's why today's architectural ensemble harmoniously combines elements of different periods. The last large-scale reconstruction of the mosque took place in 1953, and it has remained unchanged since then. Copyright www.orangesmile.com
Advices to travellers: what you should know while being in Medina
1. If exploring religious shrines is not the only purpose of your trip, the best time to visit Medina is between November and February. During this period, there is the lowest concentration …

Open
An equally significant religious monument is Al-Quba Mosque. If you believe a legend, the prophet Muhammad himself took part in the construction of this mosque. Despite the fact that the mosque was repeatedly rebuilt and reconstructed, it is also considered one of the oldest in the world. In recent years, the religious monument has also turned into a multi-purpose cultural and community center. Its prayer hall is now located on the first floor of the building. The ground floor is occupied by trade pavilions and several offices of local companies. The mosque building is of great architectural value too. Valuable types of marble and ornamental stone were used for its decoration. 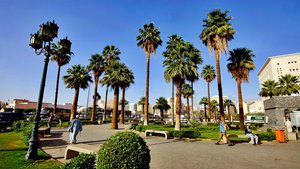 It is also worth noting the wonderful Masjid al-Qiblatain. The main feature of this mosque is the presence of two mihrabs. One of them is turned to Jerusalem, and the other to Mecca. According to historical data, the opening of this mosque took place in the year 623. Many unique decorations and traditional elements have been preserved in the hall of the classical Islamic structure.
Guide to Medina sightseeing - things to see and to visit
The word Medina can be translated as "city". This is the second holy city for all Islam people. According to one theory Medina has been the first city that followed the precepts of the Great …

Open
Medina boasts several interesting museums, the most famous of which is the Koran Museum. This cultural center was opened relatively recently, it is the largest museum in the world dedicated to the history and traditions of the Islamic religion. The museum's thirteen halls contain the rarest exhibits, including the most valuable collections of ancient books and manuscripts. The museum presents thematic exhibits that are typically used in religious services. The age of some items is more than a thousand years. The museum regularly hosts scientific conferences, and its specialists are also engaged in print media publishing. 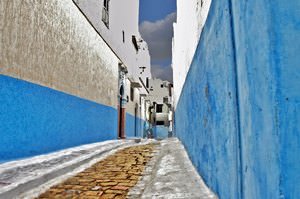 The Madina Media Museum invites tourists to get acquainted with the history and religious traditions of the city. The main part of its exposition is made up of various religious artifacts. Apart from it, a valuable collection of historical exhibits is stored in the museum. Antique garments and musical instruments, archaeological exhibits and ethnographic collections - the studying of the museum's collection may take days.
Family holidays with kids in Medina. How to entertain your child, things to show to children.
The city of Medina is largely associated with the “City of the Prophet” (Mohammed himself was born here), however, it must be said that family vacations take place here too. Together …

Open
The city's largest collection of pre-Islamic exhibits is gathered in the Al-Madina Museum. It tells visitors about the life of the indigenous population during the reign of the great caliphs. All the exhibits in the museum are more than one and a half thousand years old. Its walls keep collections of ancient weapons, national clothes, and craft masterpieces. Here you can also see jewelry that once belonged to noble rulers. The museum regularly conducts educational tours for children. Its collection is considered one of the most diverse and fascinating of those presented in the city.

This guide to cultural sights Medina is protected by the copyright law. You can re-publish this content with mandatory attribution: direct and active hyperlink to www.orangesmile.com.
Medina - guide chapters 1 2 3 4 5 6 7

The city of Al-Hofuf is located in Al-Ahsa Oasis. It is considered the cultural center of Saudi Arabia. According to legend, Leyla and Majnun died here. The ruins of the fortress walls and Ibrahim Palace are preserved in the city. The palace was built more than 500 years ago under the Ottoman Empire. … Open

Photogallery of cultural heritage of Medina

Excursions over cultural sights of neighbours of Medina

Jeddah
The modern part of Jeddah is home to numerous interesting attractions such as Municipality Museum. The building which houses the museum was built in the beginning of the 20th century and is also made of coral blocks. Numerous halls of the museum exhibit a rich collection of historical artifacts, important documents and maps. Abdel Raouf Hasan Khalil Museum is a no less ... Open »
Mecca
Mecca suburbs are also not deprived of symbolic landmarks that are worth the attention of tourists. Legendary Arafat Mount is one of them. According to a legend, this is the place where Adam met Eve. Nowadays, just like many centuries ago, Mount Arafat is a regular venue for important religious celebrations. Abraj Al-Bait Towers are also among the outstanding landmarks of ... Open »
Hurghada
The nearby monastery of St. Anthony was founded on picturesque foothills in the middle of the 4th century. The monastery got its name in honor of the father of Christian monasticism; even today monks live in its walls. The monastery is open to public and all attendants can get acquainted with peculiarities of life of local monks. The monastery of St. Anthony houses a large ... Open »
Riyadh
The heritage center is hosted in the halls of the fort, inviting tourists to explore priceless historical artifacts. The Er-Riyad Museum is a remarkable cultural object. One of its halls keeps a wide collection of archeological artifacts, some of them date back to the Bronze Age. The ethnographic hall performs a collection of cultic attributes, weapons and custom things. The ... Open »
Aqaba
Ruins of al old church are one more interesting historic landmark in Aqaba. For people not interested in history, the ruins might not look appealing. However, history fans will want to explore the area. The church, fragments of which were discovered during excavations in Aqaba, was officially recognized among the oldest in the world. Its foundation dates back to the 3rd ... Open »
Eilat
Perhaps, Underwater Observatory Marine Park is one of the most unusual landmarks in Eilat. The underwater observatory consists of two halls located 6 meters deep in the water. These halls have large panoramic windows that are very comfortable for watching the underwater life. The observatory is built close to the unique coral reef. It is hard to put into words the beauty and ... Open »

Culture guide to Medina. Which fascinating sights to visit once you are in Medina: temples, churches, museums, theaters and castles. Recommendations (with addresses, phone numbers and links) on the places 'must visit' in Medina. Plan your own city excursion by using this page info!