Detailed hi-res maps of Luzern for download or print 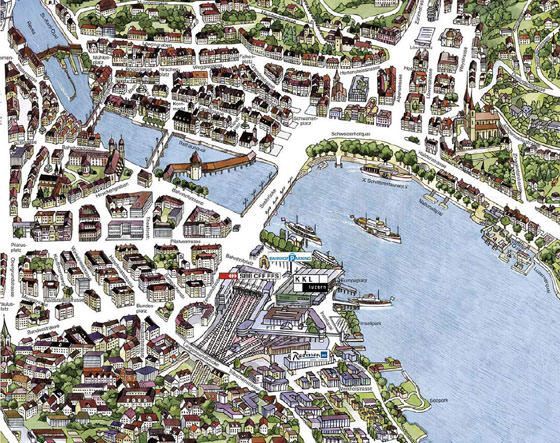 Search for services, infrastructure and sights on map of Luzern

Our guide chapters over Luzern

Luzern for children - what to visit

In Lucerne, it is also worth checking out restaurants or cafes that serve amazing desserts. For example, in Gelateria dell'Alpi, you must try fantastic ice cream, in Confiserie Bachmann - delicious Swiss cakes, and in Konditorei & Cafe Heini - wonderful pies. Dieci Café offers delicious ice cream desserts, and at CrazyCupCake Café, parents should treat their children to unsurpassed chocolate cakes and pies. Kids … Open

There are several great markets in Lucerne. The largest and most interesting for tourists is Luzerner Wochenmarkt. At this grocery market, you can buy all kinds of popular products. Local farmers present their products here too. The market has large pavilions with cheese, dairy products, deli meats, seasonal vegetables, and fruits. The best bakeries in town offer their products at the same market. Here you can buy … Open

3. Tourists wishing to use the public transport for cruising the city and visiting the tours, should better buy a pass ticket Swiss Pass. It gives the right of free rides in public transport and discounts for tours visiting. The pass is available for purchase in tourist information center or in some hotels. 4. Bicycle is one of the most popular city transports. The main rental center of two wheel … Open

Apart from beach sports, in the summer season, tourists will have the opportunity to enjoy other outdoor activities like paragliding, parachuting, or trying one of the eco-tours so popular in Lucerne (covering the mounts Pilatus, Rutenberg, Napf) and hiking in picturesque places (UNESCO Biosphäre Entlebuch Park). However, for the same purposes, guests of the city can rent a bicycle and take a ride around the city … Open

Festivals and events in Luzern

Connoisseurs of classical music will be glad to know that they can listen to it three times a year. Firstly, during the Easter celebration, the second festival lasts the whole summer, and for the third time, the festival participants visit the city in October. Musical concerts with the participation of orchestras and ensembles, as well as solo performers, take place in various cultural institutions of Lucerne such … Open

On the Kornmarkt Square, you can see the beautiful building of the old town hall. Originally, this huge building was used for grain storage. On the square in front of the building, was located the grain market. In the 16th century, it was decided that the majestic building be converted for the city authorities. Today the ancient town hall is the embodiment of the best traditions of the Renaissance style. An … Open