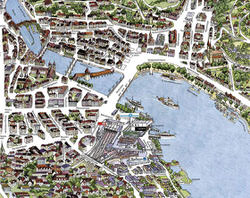 Interactive maps of hiking and biking routes around Luzern

1. You can zoom in/out using your mouse wheel, as well as move the map of Luzern with your mouse.
2. This interactive map presents two modes: 'Biking Routes' and 'Hiking Routes'. Use the '+' button on the map to switch between them.

This Luzern map has two modes: 'Railway Network' and 'Landscape & Rural Map'. Use the '+' button on the map to navigate.

Our guide to Luzern

Festivals and events in Luzern

For many visitors to the city and locals, Lucerne's favorite holiday is the Blue Balls Festival. Everyone who has ever heard of this event is looking forward to it. The variety of music genres, eminent headliners performing for the audience, art exhibitions, a wide gastronomic program - these are just a few advantages attracting its visitors. The great popularity of the musical event is evidenced by the number of … Open

While in Lucerne, be sure to check out the news about upcoming concerts. The city often hosts interesting musical performances (for example, at the Konzerthaus Schüür or the Kultur- und Kongresszentrum). In many bars, guests are entertained by musicians performing live music (Louis Bar, The BruchBrothers, Netzwerk Neubad, already mentioned Pravda Club). Besides the above, Lucerne has several nice bars for a good … Open

5. Prudent tourists apart from budgetary restaurants and cafes should pay attention to local supermarkets. There one can buy not only grocery but the ready-made meals as salads and pastry. The most popular supermarkets are Coop and Migros. 6. Local shops are open from 9 am and work till 7-8 pm, the upscale shopping centers are open till 21.00. Saturday is considered to be a shortened working day. … Open

Lucerne can boast one of the largest shopping centers in Switzerland - Mall of Switzerland. The shopping complex covering an area of 46,000 square meters offers a choice of over 150 stores of various specializations. Among them, there are premium fashion stores selling clothes of famous European brands and specialized stores with goods for children, as well as good perfumery and jewelry stores. An area of more than … Open

Luzern for children - what to visit

Nearby is a playground for the youngest children (from 2 to 6 years old), which is called Paradisimo. Here, little travelers can play table football and basketball, air hockey. They are also invited to ride cars, climb interesting constructions, and jump on trampolines. Kids will be equally interested in Eiszentrum Luzern where they will have the opportunity to enjoy ice-skating in winter. To have a great time as a … Open

The unique attraction of Lucerne is the Glacier Garden. It is a geological park-museum, which was founded in the 19th century. Its founder is the most ordinary citizen of the city Josef Wilhelm Amrein-Troller, who discovered unique fossils while working in his garden. Now the open-air museum occupies a vast territory, which is divided into several thematic zones. The museum was equipped with a special indoor … Open