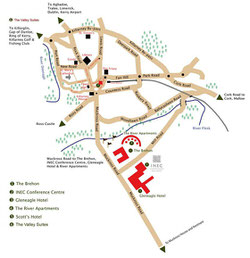 Interactive maps of hiking and biking routes around Killarney

1. You can zoom in/out using your mouse wheel, as well as move the map of Killarney with your mouse.
2. This interactive map presents two modes: 'Biking Routes' and 'Hiking Routes'. Use the '+' button on the map to switch between them.

This Killarney map has two modes: 'Railway Network' and 'Landscape & Rural Map'. Use the '+' button on the map to navigate.

Also, taxi services are popular in cities. Nonetheless, their fare is quite expensive. For pick up, you will have to pay at least four euros. In many cities, tourists can rent motorcycles or bicycles. There are even special bike tours. The territory of Ireland is comfortable enough to move on two-wheeled transport, and there are even specially equipped bike paths. Nevertheless, most locals and tourists prefer to walk around the city on foot and enjoy the delightful scenery and historical sites. Outside the city, locals give tourists even horses for hire. For most, it is more fun than a vehicle. … Open

Another incredibly interesting place is Connemara National Park located in Galway County. The territory of the park is covered with forests and heathland. Any rural activity is illegal there. Unlike most other landscapes of Ireland, the slopes of Connemara are not emerald, but of a reddish hue. This is explained by a large number of plants with red flowers. In addition to its rich world of flora, the park is known for its megaliths or structures of stone blocks created by prehistoric people several thousand years ago. The feature of the park is Connemara horses. These beautiful and graceful animals are the biggest ponies in the world. … Open

Our guide to Killarney

Just like the majority of cities of Ireland, Killarney is rich in architectural and historical sights. You will find out more about this place if you visit its numerous museums. Among architectural sights of the region we should definitely mention St. Maria Cathedral that is decorated with mosaics and frescos. The monument of four poets is one of the most unusual sights of the town. The monument is installed on one … Open

Mansion surrounded by the incredibly beautiful garden is visited by hundreds of tourists, who want to admire floral arrangements and see high ancient trees. Not far from the old mansion is another museum complex, which exhibits arts in the open-air area. We are talking about the Muckross Farm Museum inviting visitors to become familiar with the life of local farmers. Picturesque farm was built by sample of those … Open

The real surprise waits for fans of nightlife. There are clubs and discos for every taste in the town. The Laurels nightclub never ceases to delight guests with enchanting partying. Its music program is very diverse, so it will cater preferences of all visitors. The Killarney Grand club also welcomes with great music program and a variety of drinks at the bar. For those who want to relax in a tranquil and secluded … Open

Among extravagant and exotic places it is worth to mention Rozzers Indian restaurant. Space there is decorated in best traditions of Indian culture; the specialty of restaurant is curry. Despite the fact that prices are quite high, visitors like Rozzers very much, so it’s better to book a table for dinner in advance. European Bricin Restaurant will suit well for the family dinner. Young visitors will … Open

Traditions and mentality of Killarney

Main streets of the town come alive in the evening – there are fairs, theatrical and musical performances, as well as performances of famous comedians and magicians in the squares. Generally, the festival is dedicated to Killarney Summerfest sports, but it also covers some creative aspects. The most important sporting events are Killarney Regatta, 5-kilometer Killarney Races and competition of cyclists. The event … Open

Nearby is another interesting landmark – Muckross Farm. This farm always welcomes guests. Visitors can stroll through its entire territory and get acquainted with friendly inhabitants. All visitors to the farm can learn how to take care of animals, and also watch how the owners work. The farm is located in an incredibly beautiful natural area, which is largely oriented to tourists and is equipped for a … Open