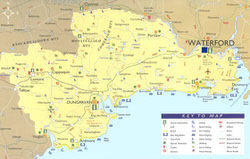 Interactive maps of hiking and biking routes around Waterford

1. You can zoom in/out using your mouse wheel, as well as move the map of Waterford with your mouse.
2. This interactive map presents two modes: 'Biking Routes' and 'Hiking Routes'. Use the '+' button on the map to switch between them.

This Waterford map has two modes: 'Railway Network' and 'Landscape & Rural Map'. Use the '+' button on the map to navigate.

City tours, excursions and tickets in Waterford and surroundings

Ireland West Airport Knock is also designed for international flights besides the many charter flights from the UK and France that the airport accepts daily. Since 2007, the airport began restoration work to which the government has allocated more than twenty-seven million euros. Thus, in 2008, the airport was assigned a second category. This means that during takeoff or landing, passengers are guaranteed absolute safety even in conditions of poor visibility. To date, the airport operates three terminals at once, and a wonderful viewing platform that will please tourists. Galway Airport is the air gateway of West Ireland. It is located just 8 kilometers from the city of Galway. It should be noted that student of light aviation school undergo their practical training at the airport. … Open

Overview of festivals and celebrations in Ireland

Ireland is home to one of the most popular holidays in the world - Halloween. The original Night of Horror was brought from the Irish and Scottish Celts, who believed that the spirits could come down from heaven to see the living one day. There are lots of traditions associated with Halloween. One of the symbols of the holiday is the Jack Lantern that is made of a pumpkin. Such lamps are installed near houses to drive evil spirits away. Children dress up in carnival costumes and go to their neighbors to beg for sweets. The most popular costumes are evil spirits, including zombies, witches, and vampires. According to the legend, children in such clothes will remain unrecognized and will be lost among the real evil. Special activities are arranged on this day. The main purpose is to frighten visitors as much as possible. … Open

Our guide to Waterford

Reginald Tower is the main attraction and the symbol of Waterford. The construction of the tower took place during the reign of the Norman Empire. Nowadays the monument reminds of the greatness and power of the town. Its observation platforms feature stunning panoramic views of the town and its suburbs. Mall City Hall Boulevard is the location of one of the most beautiful buildings in the town. This is a magnificent … Open

Lismore Castle is a beautiful sample of Gothic architecture, built in 1185 on orders from King John. In the middle of the 18th century, the Duke of Devonshire was the owner of the old fortress. During this period its first major reconstruction took place. Currently, the old castle covers an area of about 60000 sq. m. Almost all rooms are open for tourists. The castle is surrounded by a lush garden, so warm season is … Open

Maps of Dublin
Many popular films were shot in Dublin, so film fans will find it particularly interesting to visit it. For example, several scenes of Harry Potter were shot in Trinity College, its library to be precise. Besides that, such famous people as Oscar Wilde and Jonathan Swift studied there. Dublin Castle became a shooting spot of one of the best historical TV series of our time ... Open »
Maps of Killarney
Killarney offers a lot of other entertainment - thus, you can go kayaking along a picturesque lake, while luxury boat cruises and fishing are in high demand too. Hiking and cycling enthusiasts are delighted with wonderful excursions organized in Killarney and its surroundings. Just the thought of scenic views with green fields, sheep grazing here, and fresh air immediately make ... Open »
Maps of Galway
Shops and malls of Galway deserve special attention. The best bookstore in town is Charlie Byrne's Bookshop that pleasantly surprises visitors with its wide assortment. Here you can buy not only your favorite books and beautiful gift editions but also souvenirs - calendars and postcards depicting local attractions. Tourists wishing to buy jewelry as memorable gifts should ... Open »
Maps of Swansea
In the city center there is Singleton Park; it is a great place to relax after walking through busy city streets. In summer, literally every evening, musical concerts and theatrical performances are held in the park. Among other attractive sites, Brynmill Park is worth mentioning. The most beautiful beach in Swansea is Rhossili, it has long been visited fans of surfing. The ... Open »
OrangeSmile.com - online travel reservation expert providing reliable car rental and hotel booking services. We feature more than 25.000 destinations with 12.000 rental offices and 200.000 hotels worldwide.
Secure Server