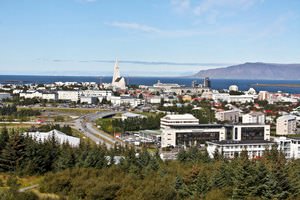 1. Walking into a person's house, be sure to take off your shoes in the hallway. You can walk around the house in your socks, but would be better to take slippers with you - this will surely make a good impression as a sign of respect for the house and its owners.
2. While driving a car, one should never drive off the road. Firstly, that's how you can get into an unpleasant situation since this is prohibited by law. Secondly, Icelanders are very concerned about the environment, which can be harmed by driving through unspoiled territories.
3. Tipping is not customary in Iceland. Therefore, it's better to refrain from leaving extra money to stuff, even if the service was excellent - you can even offend workers. Therefore, one should confine themselves to verbal praise.
Unique sights of Iceland from our series 'Extreme places on Earth'
These spots really worth the attention of a real traveler-researcher. …
Read further
4. Taking pictures of people, their homes and other property without permission is not allowed. Here this is taken very seriously - a person can be insulted just by shooting him/her without asking.
5. Icelanders like when foreigners say good things about their country. In a friendly conversation, it can be just a nice compliment, but this moment can be used to your advantage: quite often, in order to make a good service even better, one just need to sincerely praise something like the nature or culture of Iceland, and the flattered staff will work harder. The main thing is that your praises should be sincere, as fake emotions are not welcome.
6. The question "How do you like Iceland?" should be answered with alacrity, preferably with humor. An indifferent response may offend the Icelander. One should be ready for this question from the very first minute in Iceland - it is often asked here.
7. It is not worth talking about Icelandic politics, or even politics as a whole. If the interlocutor himself started a conversation on this topic, it's better to keep a neutral position. Copyright www.orangesmile.com
8. In Iceland, you can drink water from the tap. Icelanders would be surprised by the desire of tourists to buy bottled water while there is clean and tasty tap water right under their nose. That's how one can pass for fussy and arrogant.
9. You should not talk loudly, shout or make any noise in public places, except for noisy nightclubs, of course. Icelanders know: those disturbing the peace in a public place are tourists with poor manners or freaky drinker.
10. Some dishes common to Icelanders may seem disgusting or shocking to foreigners. One should not criticize food, be horrified, touch one's mouth, hold one's nose or wince - this can ruin the appetite of others and insult not only those who have prepared these dishes but also the Icelanders' national pride.
11. Icelanders love to spend their free time in thermal pools and saunas. There is a strict rule: before entering the pool and diving into the water, one must take a shower. Thanks to this strict hygienic rule, the water in natural pools remains clean - and as is well known, Icelanders take great care of the environment and the country's ecology.
Iceland cultural sights. What to see?
Relatively small Iceland has an incredible number of interesting places that must be visited by every tourist interested in the history and culture of …
Read further
12. Try to avoid using abstruse jokes, puns, and sarcasm in speech. Although Icelanders understand English, it is not their native language, so they may take the joke seriously. It is better to talk straight.
13. It's advisable to wear comfortable shoes even for a walk through the capital. Although the roads are good enough, it's still better to leave heels and narrow shoes in the hotel - in such a seemingly small town there is something to see and where to go. In uncomfortable shoes, feet get tired quickly and start to hurt - the walk will be spoiled.
14. One should not be horrified by vulgar manners of some Icelanders: here it is considered perfectly normal to burp or scratch the ear in the presence of friends, even not the close ones. Things like this should simply be ignored.
15. In Iceland, it is better to speak bad English than average Icelandic. Icelandic pronunciation is quite difficult, and sometimes locals do not understand what tourists are trying to say. So it's advised to leave any attempts to flaunt one's knowledge for the homeland.

This collection of travel tips for Iceland is protected by the copyright law. You can re-use the content, but only under the condition of placement of an active link to www.orangesmile.com.
Iceland guide chapters 1 2 3 4 5 6 7 8 9 10 11

Colorful and unique places in Iceland 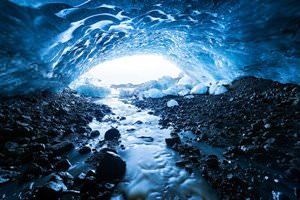 In Iceland, in the territory of the Skaftafell National Park there is an amazing ice cave with the same name. Ice caves in general are considered a very special kind of geological formations. They appear on the edge of glaciers and can exist only a few decades. Skaftafell Ice Cave, as well as other caves similar to it, has been formed under the influence of thawed waters. They are accumulated on the surface of a glacier and penetrate into its smallest cracks, gradually leading to the formation of huge galleries.

The ice cave looks incredibly beautiful. In the daytime the light hits the walls of the glacier and stains the cave in a rich blue colour. Visiting the cave is allowed only in winter, when low temperatures hold ice together. In summer, the cave can collapse at any time. Being … Read all 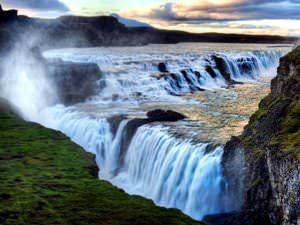 The real national symbol of Scotland is Gullfoss waterfall (“Golden Falls”) located on the river Hvita. This waterfall has a very unusual structure. It consists of two massive ‘’staircases’’ that have a height of 21 and 11 meters. No less interesting is the fact that the “staircases’’ are disposed at right angles to each other.

The strength of the stream began to attract people more than a hundred years ago. There was much speculation about using Gullfoss to generate electricity. In 1920 a hydroelectric power station was under development in this area. As it turned out during the preparatory work the construction of power station threatened the existence of the unique natural object, so the advanced ideas were denied.

Many beautiful legends are connected with the … Read all 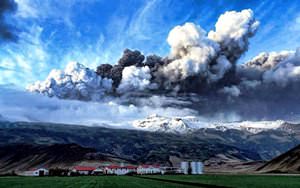 One of the main national symbols of Iceland is Hekla volcano. Its height is 1,488 meters. Locals began to implement continuous monitoring of volcano activity in the second half of the 9th century. During that time, strong eruptions occurred more than 20 times. The increased activity of the volcano was recorded in the Middle Ages; during that period locals gave him a resounding informal name, ’Gateway to Hell.’

One of the main features of the volcano remains its unique eruption process, so it’s incredibly difficult to predict the onset of another disaster, as well as its specifics. Locals refer to the volcano with great reverence and consider it to be national pride; its current name is very symbolic and amazing. Hekla is translated from Icelandic as ‘short raincoat with a … Read all
All unique sightseeing Iceland

Advices for popular cities of Iceland

Reykjavik
1. The peak of the tourist season in Reykjavik falls within July and September. The season features mild and cloudless weather. However during winter time the city hosts several great festivals and national holidays attracting tourists from all over the world. 2. The best way to cruise the city is on foot as all entertaining centers and sights are located in close vicinity to each other. 3. The only public means of transportation available in the city is a bus running to almost any part of … Read more

Keflavik
1. Keflavik has one of the largest and most advanced airports in the world. The fastest and easiest way to get to the city is by plane. 2. In the city, literally everywhere you can pay with a credit card. Carrying large amounts of cash is not necessary. 3. Active tourists should definitely rent a car. In the vicinity of the city, there are many interesting sights and entertainment centers located just a few minutes’ drive away. 4. The three summer months are considered the most … Read more