Detailed hi-res maps of Goteborg for download or print 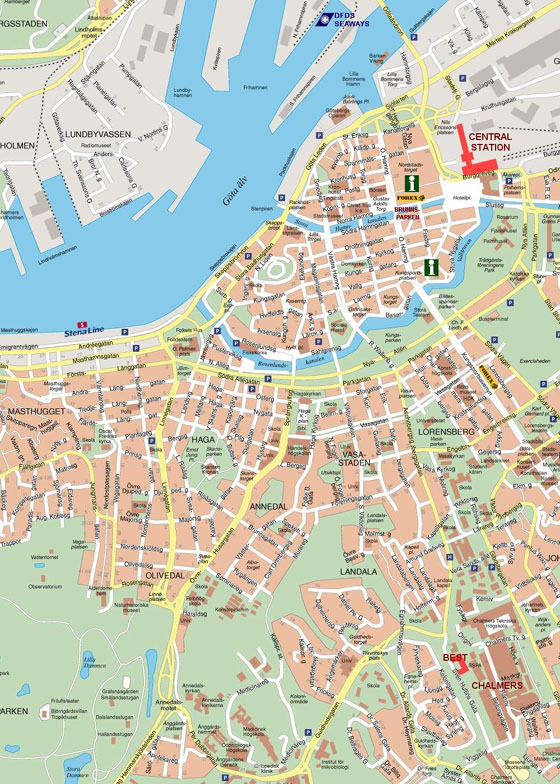 About one third of all the energy needs of the Kingdom come from importation, including oil and gas. The main sources of domestic energy are hydropower resources, timber, and nuclear energy. It is worth noting that Sweden continues to increase the rate of withdrawal from imported energy through the development of nuclear and hydropower. This is why, to date, nuclear power constitutes about 50% of the country’s energy consumption. Despite the fact that throughout the European Union there is a negative attitude towards nuclear energy and a great fear of ecological damage caused by nuclear energy production, the Swedes do not agree with this opinion and continue to develop new reactors. … Open

Search for services, infrastructure and sights on map of Goteborg

Our guide chapters over Goteborg

Those looking for golf opportunities will find entertainment in Hills Golf & Sports Club, an amazing center that brings joy by providing all conditions for playing the game of billionaires while admiring stunning views. Another club is for bowling players, and its name is Stars and Stripes. Its situation is highly appreciated by both adults and the smallest citizens, just like the one in Skatås Leisure Center. … Open

Festivals and events in Goteborg

In late February, Gothenburg hosts such an event as the Gothenburg Horse Show and Eurohorse. The venue for the event is the Scandinavium Arena. This is the time of colorful performances and shows, which means that all those looking for vivid impressions and interesting events must witness the event. Well, for those who wish to taste the best alcoholic drinks at the beginning of April should pay special attention to A … Open

The luxurious boutique, Dorsia Hotel & Restaurant, is located within walking distance from the train station. It presents its client with exclusive rooms decorated in the modern style. Every room has a special design; they feature beautiful vintage-style wallpapers, huge beds, and art nouveau furniture. Bright carpets, sofas, and armchairs with upholstery made from colorful velvet fabric, a variety of works of art … Open

7. Tourists, who plan to buy antiques as souvenirs, should pre-arrange all the necessary documents for export in advance. Import of antiques is possible only if you have supporting documentation. 8. Every restaurant and bar in the city offers a rich selection of alcoholic beverages, but you can drink them in specially designated areas only. The appearance on the city’s streets in a drunken … Open

Hotels with history of Goteborg

Not far from the famous Gothia Towers complex is situated the Eklanda Apartment Korsvägen, designed to accommodate four guests and largely oriented towards those who appreciate ancient traditions. The spacious apartments feature an interesting collection of antique furniture and vintage accessories. The rooms are covered with very beautiful bright wallpaper with patterns, and everywhere you look, you can see old … Open

Fish Church is known to the entire city. This fish shop is located in a very beautiful historic building and presents just a huge choice of seafood. There is an excellent restaurant inside where they serve all popular types of seafood prepared under national recipes. Those who prefer walking round unusual shops, will be interested in attending Victoriapassagen. Here, they sell superb design items. You can choose … Open