Detailed hi-res maps of Helsingborg for download or print 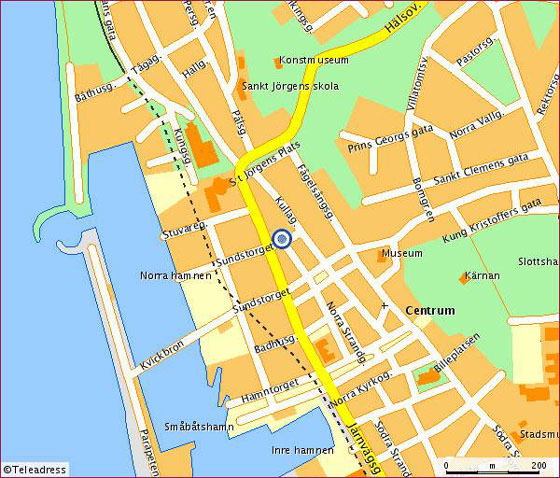 The actual dimensions of the Helsingborg map are 600 X 512 pixels, file size (in bytes) - 69057. You can open this downloadable and printable map of Helsingborg by clicking on the map itself or via this link: Open the map.

Despite this, Sweden independently provides all the food needs of 85% of the population. The main focus is on the production of meat and dairy products. The largest pig-breeders which produce not only meat, but also bacon, are situated in Skåne. Crop production includes the cultivation of barley, wheat, sugar beet, potatoes, among other products. However, the vast majority of cultivated arable land is intended for the cultivation of various forage crops in order to ensure the uninterrupted operation of the livestock sector. Sweden, thanks to its location in the heart of the Baltic region, is one of the most strategically important sites for transporting goods between Russia and the Baltic countries, and the entire European market. At the same time, there are no currency controls in the country, export profit is not limited, and there are no license fees. … Open

Search for services, infrastructure and sights on map of Helsingborg

Our guide chapters over Helsingborg

This city is located in the southern part of the country. This is a major trading port, a famous industrial and transportation center. First mentions of Helsingborg refer to the beginning of the 11th century. Due to the fact this city has an advantageous trading and strategic location, its territory has always attracted the attention of numerous countries. In the 13th century the Danes built a fortress in the … Open

When walking along the North Harbor, you can visit the Dunker Culture House. It is distinguished by its impressive size and offers its visitors a lot of interesting entertainments. Every day, different cultural and entertaining events including special programs for children are held here. The significant part of this building is used for organizing exhibitions. There is also a popular restaurant and pub in the … Open

Maps of Copenhagen
The European pearl Denmark is full of astonishing architecture and will gladden its visitors with a great variety of holidays and interesting actions. All the Danish holidays are worth visiting, but we have highlighted for you must-see celebrations. First, it is worth traveling to Copenhagen for New Year and Christmas. Here you will be captured by the fantastic atmosphere with ... Open »
Maps of Malmo
The middle of August in Malmo is the time of one of the largest events in the city, called Malmöfestivalen. The multi-faceted celebration includes many bright events and attracts street musicians, actors, poets, and among them there are famous personalities (so, at one time, Timbuktu, The Ark, Aid Kit became headliners of the festival). The festival is also an attractive event ... Open »
Maps of Arhus
Throughout the year, Aarhus hosts many interesting festivals, which can help travelers understand the culture and traditions of local people better. In March, it is the traditional heavy music festival, in which rock musicians from various countries take part. Many concerts within its framework are organized in open-air venues. Motorcycle enthusiasts would also be interested in ... Open »
Maps of Odense
Odense is the venue for Denmark's oldest film festival - Odense International Film Festival. First held in 1975, now the festival is held annually in August. During the festival, interesting contests and film screenings are held every day for one week. Young directors compete in The Talent Camp in Odense. For novice filmmakers, this competition becomes a real educational ... Open »
Maps of Goteborg
In late February, Gothenburg hosts such an event as the Gothenburg Horse Show and Eurohorse. The venue for the event is the Scandinavium Arena. This is the time of colorful performances and shows, which means that all those looking for vivid impressions and interesting events must witness the event. Well, for those who wish to taste the best alcoholic drinks at the beginning of ... Open »
Maps of Alborg
At the beginning of the 20th century, Aalborg became a major industrial center where some of the country's largest cement plants were located. Everything changed in 1974 when the University of Aalborg opened in the city. Now it is one of the largest Danish universities operating many research centers. As a result, the industrial sphere has lost its former relevance. Today, ... Open »
OrangeSmile.com - online travel reservation expert providing reliable car rental and hotel booking services. We feature more than 25.000 destinations with 12.000 rental offices and 200.000 hotels worldwide.
Secure Server