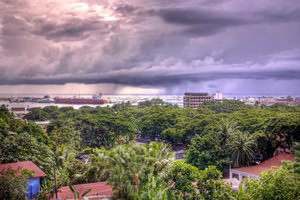 A major part of historical and cultural landmarks and sights of the tourist destination was destroyed in the end of the 19th century by an extensive fire. A ruinous cyclone battered on Papeete in 1906 badly damaged the city as well. However the city of Papeete has preserved numerous cultural objects which will be of great interest for all the tourists to explore. The best point to start an exploration of the landmarks and sights of the Papeete city is the Toata Place as it is an established location of holding of all significant events in the life of the city.
Extraordinary weekend in Papeete - unusual places, services and attractions for travel gourmet
…

Open
The Avenue Bruat starts right near the Place. The street hosts astonishing office buildings and significant governmental institutions. The most beautiful architectural landmark of this district is considered to be the Presidential Palace and the High Commissioner Office. Another interesting spot of tourist interest to visit and explore is the General Post Office which is surrounded with the scale Bougainville Park.
The Vaima Center is considered to be the main shopping area of the city. However apart from numerous stores and boutiques tourists will find several landmarks there as well. Among them travelers will discover the Cathedral of Notre Dame of Papeete. Its construction was held in the second part of the 19th century. The religious building was as well severely damaged with ruinous natural disasters the city has survived in. The last scale reconstruction of the Cathedral was finished twenty years ago. The Missi-District of Papeete features as well several religious landmarks. Tourists will find a marvelous catholic church and the Bishop Palace there. The palace was established in the beginning of the 17th century and is now one of the oldest buildings in the city. The impressive building has survived till nowadays by miracle. Copyright www.orangesmile.com
Guide to Papeete sightseeing - things to see and to visit
One of the oldest cities in French Polynesia, Papeete-Tahiti is the administrative center of Tahiti. The city’s name can be literally translated as "water from the basket". This …

Open
The Paofai Temple is located not far from the city center. Tourists whose exploration tour will run though this symbolic historical landmark should necessarily look into the church to fully embrace its magnificent interior decoration. The city of Papeete features plenty of cultural establishments among which tourists give ultimate preference to the Museum of Tahiti. The museum keeps a rich collection of historical showpieces and tells its visitors about the most significant events in the life of the island. Another significant spot of tourist attraction is the Black Pearl Museum which collection is dedicated to the history of appearance and development of one of the local businesses. A major part of the showpieces of the museum consists of jewelry of ultimate beauty worth of eternal admiration.

In the section below, you can get one of our excursion, activities or city discovery tours over Papeete and surroundings. Our website offers 10-30% lower ticket prices, when compared to the offline purchase on the spot.

City tours, excursions and tickets in Papeete and surroundings

This guide to cultural sights Papeete is protected by the copyright law. You can re-publish this content with mandatory attribution: direct and active hyperlink to www.orangesmile.com.
Papeete - guide chapters 1 2 3 4 5 6 7

In Papeete is also where the Cathedral of the Immaculate Conception of the Blessed Virgin Mary is situated. It is one of the oldest places of worship for Tahitian Catholics. The cathedral was opened in the year 1875. In the architecture of the building, two mutually complementary styles can be traced: colonial and local. The building cannot be called large, but it certainly attracts attention. The beautiful stained glass fits perfectly into the neat interior of the church. Located in Rikitee, the Catholic Cathedral of St. Michael, opened in 1848, is a neo-Gothic building with strict geometric shapes. The altar of the Cathedral is decorated with black pearls and mother-of-pearl. … Open

Photogallery of cultural heritage of Papeete

Excursions over cultural sights of neighbours of Papeete

Tahiti Island
This place is very interesting, here you can find a lighthouse that is one and only on the island; furthermore, you can enjoy a great view from the hill. Actually, the island has many places associated with pirates; therefore, you will have a chance to organize a thematic excursion in the footsteps of these legendary conquerors of the sea. You might want to visit ... Open »
Vaiare
Tourists who decide to visit Maharepa will find some interesting historical landmarks there. Maison Blanche is definitely one of them. This building, which dates back to the beginning of the 20th century, has an unusual location on the mountain side of the road. The mansion is a great example of the fare vanira homes, plantation houses that became very popular during the ... Open »
Moorea
The center runs fascinating entertainment programs and shows starring the cutest sea animals, making it especially popular with tourists that travel with their kids. There are also several unique religious attractions on the island, including the famous Papetoai Temple. Located in the village of the same name, the temple was built in the first half of the 19th century. ... Open »
Manihi
It’s essential to point out that despite the fact there is almost nothing left from the original Polynesian settlements, there are still a few maraes on Manihi. The word marae can be translated as «a flat area, cleared of weeds». However, it’s actually a small rectangle bordered with stones. There were statues of gods in the corners in the former days, unfortunately, ... Open »
Aitutaki Island
You can also travel to the far areas of the island if you’d like to, far from hotels and places of interest, to communicate with the Māori. So, there you can see how people used to fish, build houses and various outbuildings, weave, carve wood, cook, and carry out religious rituals. The Māori don’t mind tourists who actually want to find out something new and even can ... Open »
Avarua
Local people are good at leaf weaving so the museum displays the most interesting works of local craftsmen. The museum also keeps a collection of ancient musical instruments. A collection of old photographs is of great interest too. The museum has many interesting thematic installations, as well as beautiful aquariums with exotic fish. After the tour, you can relax in a cozy ... Open »

Culture guide to Papeete. Which fascinating sights to visit once you are in Papeete: temples, churches, museums, theaters and castles. Recommendations (with addresses, phone numbers and links) on the places 'must visit' in Papeete. Plan your own city excursion by using this page info!