National traditions of Belarus. Habits, mentality and the way of living 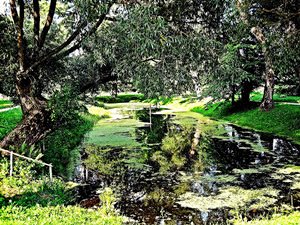 Belarus is a relatively small country, so it remains an undiscovered spot on the map for many foreign travelers. There are more than 11,000 lakes in the country, as well as five large rivers, namely, the Neman, Dnepr, Sozh, Berezina, and Pripyat. Broadleaved and pine woodlands occupy approximately 42% of the country’s territory. Belarus is a very friendly and safe country for foreign travelers. Citizens of 74 countries do not require a visa to stay in the country for 30 days. The maximal no-visa stay in Belarus is equal to 90 days per the calendar year.
Things to do in Belarus - active leisure
Aerotour-Balloons' offers a truly remarkable and unforgettable entertainment for travelers. They can book a flight in a real hot air balloon. A …
Read further
Grodno is one of the mind-blowing medieval cities with cobbled streets and gorgeous squares, old churches, and interesting landmarks. The city is located not far from the borders with Poland and Lithuania. Tourists never stop amazing how clean and tidy the city is. Charming streets, comfortable squares with numerous ATMs, flowerbeds along streets and parks, and interesting decorations on pavements add special charm to Grodno. “Blooming Belarus” and national pride linger in the air of this gorgeous city. Minsk is the capital of the country. This is a prosperous and modern megalopolis with numerous shops and restaurants. For tourists, it will be also interesting to visit Polatsk – the oldest city in Belarus famous for its architectural landmarks. Soviet architecture, numerous monuments of that period, museums, theaters, and parks coexist peacefully with old churches.
The countryside is no less beautiful in Belarus. Lush local nature, green fields, woodlands with pines and silver birches, and an endless ocean of golden wheat are worth looking at. Local roads are of great quality, so it is comfortable to rent a car and explore the country this way. Villages in the country attract foreign tourists with traditional wooden houses that are colored in many colors. Lush gardens with fruit trees create an idyllic atmosphere that so many residents of big cities crave for. Local people are friendly, cheerful, and are very hospitable. They are always glad to see foreign guests. Copyright www.orangesmile.com
What you need to know about Belarus prior to visit - advices
1. Citizens of many countries can visit Belarus without a visa for no more than 90 days. Check whether your country is eligible for no-visa entry …
Read further
Perhaps, Khatyn is the most famous World War II monument in Belarus for foreign travelers. This forest village was completely destroyed by the Nazis because local people supported partisans. The memorial complex represents 186 similar villages that were destroyed by the German troops in Belarus. The giant statue of an exhausted partisan holding a dead child is a reminder of the tragedy that happened in the country. Each chimney pot has a bell that tolls for the people who died during World War II. 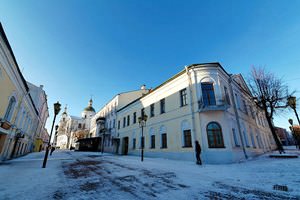 Brest Fortress is a historic landmark that definitely deserves a visit. The history of Brest is tightly connected with the history of Central and Eastern Europe. The city is mentioned in annals in the 11th century for the first time. Later, it became a part of The Grand Duchy of Lithuania. In the 16th century, the city was a part of The Polish–Lithuanian Commonwealth. After the war with Napoleon, it was decided to rebuild Brest and make a better fortress. Because of that, the original city was nearly completely destroyed. A new city was built approximately 2 kilometers to the east. However, it didn’t exist long because the retreating Russian army burned down the city’s buildings. In Brest, it is not hard to find a proficient enthusiast – a local guide who will tell the history of the famous landmark in an entertaining and exciting way. The impressive building was transformed into a Soviet memorial after World War II. The squares of the fortress have several monuments dedicated to the deceased soldiers.
What to see and what to visit in Belarus with children
Belarus is widely recognized as a wonderful destination for families with children of all ages. This country can offer many different entertainments …
Read further
Nevertheless, a big part of the country’s history is filled with sorrow and will eternally stay in the memory of the country’s residents. Belarus lost a quarter of its population in World War II, so every city in the country has traces of those dark times. Despite the fact that the country was significantly destroyed during the World War II period, there are still centuries-old castles and historic towns that give travelers a glimpse of Belarus during the pre-Soviet epoch. The architecture of many cities is an interesting mix of Polish, Slavic, and Soviet styles that create a truly unique result. 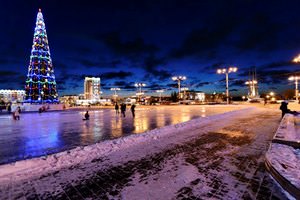 It took centuries to form local cuisine. If you want to understand another nation, it is important to try the national cuisine of that nation. The most popular products in Belarus are the following: pork, homemade sausages, bacon, beef, freshwater fish, milk, and dairy products. Belarus cuisine is famous far beyond the borders of the country. Perhaps, tourists will simply not have enough time to try all traditional national dishes. It should be noted that it is possible to eat not only Belarusian cuisine but also many other cuisines of the world in Minsk. It is possible to spend some quality time with friends and family in authentic cafes, luxurious restaurants, and open-air terraces. Cozy wine bars and loud pubs, as well as many other interesting venues, are perfectly suitable for all travelers who want to get acquainted with local culture through cuisine.

This article about national traditions in Belarus is protected by the copyright law. You can re-use the content, but only under the condition of placement of an active link to www.orangesmile.com.
Belarus guide chapters 1 2 3 4 5 6 7 8 9 10

Cathedrals and basilicas in Belarus
♥   Co-Cathedral of the Assumption of the Blessed Virgin and St. Stanislaus, Mohilev. On the map

♥   Cathedral of the Merciful Jesus, Vitebsk. On the map

Castles of Belarus
♥   Castle 'Halshany Castle' . On the map 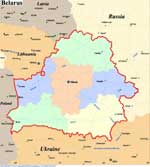 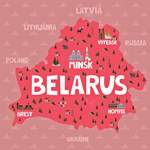 Famous sites of Belarus in pictures

Unique traditions in cities of Belarus

Vitebsk
The festival was organized in 1992 for the first time. Since then the Summer Amphitheater remains the permanent venue for its main events. The main goal of the festival is the search for mutual understanding between representatives of different cultures. There is an international holiday and a permanent symbol - cornflowers, the image of which is stylized under note on logos. The meaning of this symbol is extremely simple - cornflower since ancient times was considered an amulet and symbol of … Read more

Minsk
They consider it a powerful creature able to protect as well as punish for misdeeds. Just like many years ago, citizens of modern Minsk prefer to decorate their houses with solely natural wood furniture. Besides, wicker baskets and souvenirs are widespread decorations that can be found in almost any house. Belarusians also prefer natural clothes and cloths. As regards the citizens’ character, they are friendly and hospitable towards tourists. Many think such behaviour is a result of many … Read more