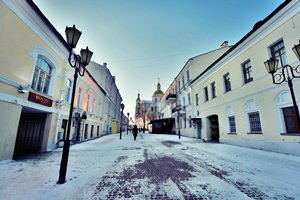 The large-scale festival movement is one of the distinguishing features of the cultural life of Vitebsk. Every year more than fifty international, city, regional and district festivals are held in the city with the participation of teams from far and near the border. One of the most famous city festivals is the International Festival of Arts "Slavyanski Bazaar". Over the past few years, it has become a large-scale and grandiose holiday, which covers a wide range of spheres of cultural life. At the annual festival, children's art, pop art, crafts, folklore, cinema, theater, circus, fashion, painting and much more are widely represented.
Cuisine of Vitebsk for gourmet with top restaurants and cafe
There are a lot of cozy restaurants and cafes in Vitebsk, among which one of the most popular is the restaurant "Zolotoy Drakon". This is the only institution in the city that specializes in …

Open
The festival was organized in 1992 for the first time. Since then the Summer Amphitheater remains the permanent venue for its main events. The main goal of the festival is the search for mutual understanding between representatives of different cultures. There is an international holiday and a permanent symbol - cornflowers, the image of which is stylized under note on logos. The meaning of this symbol is extremely simple - cornflower since ancient times was considered an amulet and symbol of peace among the Slavic people. The holiday is held every year in the middle of July, at this time Vitebsk is always visited by a lot of guests.
The main events of the large-scale festival are the performances of well-known musical groups and competitions, in which young talents take part. To diversify the program of rest to visitors of the holiday, visiting of interesting excursions and exhibitions is offered. The Art museum and a number of other cultural institutions accept active participation in the cultural life of the city. For a few years the number of permanent participants of the festival has increased by hundreds of times. Today the "Slavyanski Bazaar in Vitebsk" is one of the most significant and large-scale holidays of the country. Copyright www.orangesmile.com
Excursion over cultural sights of Vitebsk - 'must visit' points of interest
The historical and cultural heritage of the city is incredibly diverse and numerous. The most important historical symbol of Vitebsk is the Local Lore Museum, located in the building of the …

Open
The International Music Festival named Sollertinsky was called upon to revive and develop the cultural traditions of Vitebsk. This project is a non-profit action, the main goal of which is the encouragement of students' creative activity. Everyone can take part in it, regardless of the course of study, and everyone can submit up to three of his works for the contest. Every year about 200 students take part in the festival.

This guide to traditions and festivals in Vitebsk is protected by the copyright law. You can re-publish this content with mandatory attribution: direct and active hyperlink to www.orangesmile.com.
Vitebsk - guide chapters 1 2 3 4 5

City tours, excursions and tickets in Vitebsk and surroundings

Cathedrals and basilicas near Vitebsk
♥   Cathedral of the Merciful Jesus, Vitebsk, 3.8 km from the center. On the map

Perhaps, Khatyn is the most famous World War II monument in Belarus for foreign travelers. This forest village was completely destroyed by the Nazis because local people supported partisans. The memorial complex represents 186 similar villages that were destroyed by the German troops in Belarus. The giant statue of an exhausted partisan holding a dead child is a reminder of the tragedy that happened in the country. Each chimney pot has a bell that tolls for the people who died during World War II. … Open

Colors of Vitebsk in photos

Traditions and festivals in cities around Vitebsk

Minsk
As regards the citizens’ character, they are friendly and hospitable towards tourists. Many think such behaviour is a result of many centuries of communal system that naturally left its imprint on locals’ character. They are always ready to help even a complete stranger, and they do that without expecting anything in return. The citizens are also quite reserved. ... Open »
Vilnius
Lithuania is not a typical Baltic country but preserved the mentality and traditions peculiar to the Baltic states. Local people can appear very calm and cold-blooded people but in reality, they are as emotional as Italians. The main qualities of Vilnius residents are sociability, love for fun and entertainment, hospitability and love for life. You will not believe, but people ... Open »
Kaunas
Local people are very hard-working. This character trait has even found its reflection in the folk art. Most of the songs are devoted to work and labor. Even fairy tales and legends tell stories about brave and hard-working heroes. There are special literature classes in schools, during which children learn ancient myths and fairy tales, so even small kids are familiar with ... Open »
Riga
The charming city of Riga is saturated with a fairy tale atmosphere and romance. The capital of Latvia began its development in the Middle Ages as a port city: rich merchants gathered here and the powerful masters of the Levon Order built their stone castles. Today Riga is the largest city in the Baltic States with a huge number of attractions and memorable places. The ... Open »
Jurmala
You can listen to classical and modern music during the festival. You will also have the opportunity to see the latest productions of Latvian theater-goers. You will be able to visit operas and operettas from local directors. The colorful race also takes place as part of the festival in the city. Come here if you are not afraid to get dirty. The festival "Ballet Stars in ... Open »
Moscow
travelers should better join guided group tours to explore the city rather than setting off to the tour alone as finding a way to some local landmarks is rather challenging. Many tourists try to get to Moscow on the New Year’s eve as during this period Moscow features mass scale folk festivals. Great musical and theatrical performances, entertaining events for kids, plenty ... Open »

Cityguide on traditions, mentality and lifestyle of people in Vitebsk. Learn the best periods to visit Vitebsk to discover its soul - authentic festivals, events and celebrations. We will also reveal the interesting habits, attitude towards the world and to tourists in Vitebsk.