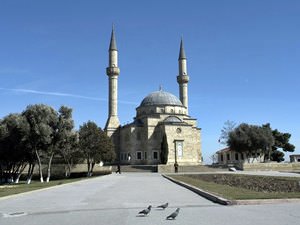 Despite the fact that Baku is a modern and rapidly developing city, local people treat their traditions and Islamic rules with great respect. Tourists are also recommended to respect the beliefs and behaviors of the city as that will help visitors to enjoy friendliness and cordiality of local people. For example, females shouldn’t make a stroll wearing too bright or revealing clothes. Men should avoid sleeveless shirts and shorts in everyday clothes. Ideally, clothes should be quite formal, loose fitting, and, most important, tidy. Locals are accustomed to a great number of tourists and treat European style with understanding, so there is nothing wrong in making a walk in a sports or business suit.
Excursion over cultural sights of Baku - 'must visit' points of interest
Maiden Tower remains the most famous symbol and tourist attraction in Baku. The magnificent tower is located in the eastern part of the ancient Icheri Sheher Castle. The tower is a unique …

Open
Travelers must treat local landmarks with respect. When entering a mosque, it is important to take shoes off. Besides that, only tourists in fitting clothes are allowed to enter. Despite the fact that women in Baku are very careful when it comes to picking an outfit, they like jewelry. Both fashion and fine jewelry is widely sold in numerous trading pavilions and street markets. Hospitality is a distinctive national feature. Despite the fact that many citizens are not rich, they are always glad to greet guests and serve a festive table full of delicacies for them. Tourists should not refuse an invitation as that can severely upset hospitable hosts.
It is important to prepare gifts for hosts. It should be mentioned that hosts often also give presents to guests, and these presents can be quite expensive, so don’t be greedy when choosing a present. In accordance with an old tradition, women cannot sit at the same table with men, but this aspect doesn’t concern foreigners. However, such a tradition is alive only in distant rural areas, while in big cities no one follows this outdated formality. Nevertheless, guests should not pay too much attention to the hostess and other women present. Such a behavior can be treated in a wrong way. Don’t forget about local table etiquette. Take and pass food with your right hand only. Fragrant tea with milk and fruit is the traditional start and finish of any meal. Copyright www.orangesmile.com
Your active city break in Baku. Attractions, recreation and entertainment - best places to spend your day and night here
Baku offers a range of entertainment for any taste for its guests. The city is perfectly suitable for a family vacation. Fans of shopping, colorful markets, and outdoor activities will also …

Open
Many important holidays in Azerbaijan are of a religious origin. For example, Gurban Bayram is one of the most important holidays in the country. Festival of Sacrifice marks the end of Haji pilgrimage. It is the time when Muslim families sacrifice a goat or camel. Novruz Bayram is another popular public holiday in Azerbaijan. The Zoroastrian New Year is the time when local people serve the special novruz table and decorate it with dried fruits, sweets, candies, and colored eggs. Some families still prepare dishes, which name starts with the latter S, such as sekkeh, sonbol, saat, sabzi, sumakh, and many others. 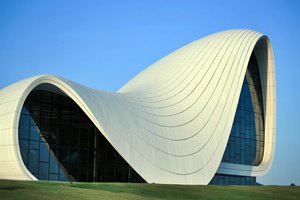 Baku is not deprived of interesting events. Azerbaijan International Auto Show is a fantastic event for everyone keen on cars. The annual show takes place in the capital in May. Many internationally famous companies show their latest achievements during the event. Cars, buses, trucks, motorbikes, trailers are just some of the vehicle types that visitors can see at the Auto Show. Agrihort Azerbaijan is the main agriculture related event of the country. Tourists will also find it interesting to attend this exhibition as Azerbaijan has nine climatic zones suitable for agriculture.
Advices to travellers: what you should know while being in Baku
1. It is better to pay with the national currency in local restaurants, shopping centers, and markets. Some shops may accept US dollars, but sellers will probably refuse banknotes issued …

Open
Tourists, who want to get acquainted with food of the country and beyond, will hardly find a better place than World Food Azerbaijan. Many domestic and foreign companies bring their food to the event. Various shows and master classes are an essential part of the exhibition. Finally, music fans simply cannot fail to attend the Baku International Jazz Festival. Locals developed love to jazz yet in the 50s and 60 of the previous century when this music was prohibited by Soviet authorities. Officially, the jazz festival appeared in April 2005. Since that time, each April the event attracts music bands and jazz fans from all over the world.

This guide to traditions and festivals in Baku is protected by the copyright law. You can re-publish this content with mandatory attribution: direct and active hyperlink to www.orangesmile.com.
Baku - guide chapters 1 2 3 4 5 6 7 8 9 10 11 12 13 14

Cathedrals and basilicas near Baku
♥   Church of the Immaculate Conception, Baku, 1.9 km from the center. On the map

Unique landmarks in Baku and around 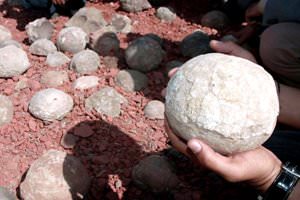 Distance from Baku center - 49.2 km.
In Azerbaijan, not far from Baku is the tiny Bulla Island, which is known under the name Hyarya Zirya. On this island in the seventies of the last century the geologist Konstantin Mamedov discovered the mysterious spherical formations. In total, the researcher has found 21 bullets. All the formations had the same structure and were clearly divided on two halves with the deep gating. … Read further

Azerbaijanis prefer to drink black tea. They usually add spices to the drink, such as cardamom, cloves, and cinnamon. Tableware used for drinking purposes is also very interesting and unusual. Mugs, glasses, and even porcelain cups are not very popular here. Azerbaijanis drink tea from Armudus, special glasses that are somewhat reminiscent of flagons. They drink only hot tea while holding the glass in a special holder. Tea is traditionally served with pastries, sugar cubes, and jam. Sand sugar is not common in the country because it ruins the magnificent taste of the freshly brewed tea. Local put sand sugar to the tea only in one case – in case of a marriage proposal, such tea means that the bride’s parents give their blessing. … Open

Colors of Baku in photos

Traditions and festivals in cities around Baku

Yerevan
Residents of Yerevan cherish their cultural heritage. Just like many centuries ago, they carefully follow the traditions of their ancestors and believe in omens. Keeping ancient national traditions alive is one of the most important aspects for any resident of the city. Respect for elder, friendly and close relationships with relatives and neighbors, responsibility for their ... Open »
Yessentuki
Especially for a long time in this area have lived the Pontic Greeks, whose settlements arose here in ancient times. They still have smart wedding ceremonies, which are still respected here. Even in our time, in Greek villages, the bride of a young man is chosen by the parents who look not only at her external features, but also on her position in society, the ties of the ... Open »
Adler
Local spices are very common among travelers, who get confused in their diversity, even experienced culinary expert. Spice vendors are real professionals; they will prepare an excellent seasoning for fish, meat, pilaf and other dishes in a couple of minutes. Adler market is one of the most successful places for acquaintance with features of local gastronomy; after all here it ... Open »
Volgograd
Twice a year, in spring and autumn, small markets open on city streets, where customers are offered to purchase a wide variety of honey. This delicacy has been one of the most popular since ancient times. Honey, which is harvested in apiaries near Volgograd, is considered to be the best in the region and among city guests it remains one of the most popular souvenirs. ... Open »
Anapa
Anapa remains one of the most popular Black Sea resorts in Russia. Unlike many modern cities, Anapa is not without personality. Despite the fact that the resort is located on the territory of Russia, the main part of its indigenous population consists of representatives of the Armenian and Tatar Diasporas. It is to them that the resort city owes its unique cultural style, ... Open »
Kuwait City
Kuwait City is a modern bustling city that isn’t alien to trends of modern culture. More recently, life there has based on an entirely different traditions and backgrounds. Only some of the important traditions have managed to preserve till these days. The most important aspect of local culture is still the good relationship between family members. The family is considered to ... Open »

Cityguide on traditions, mentality and lifestyle of people in Baku. Learn the best periods to visit Baku to discover its soul - authentic festivals, events and celebrations. We will also reveal the interesting habits, attitude towards the world and to tourists in Baku.