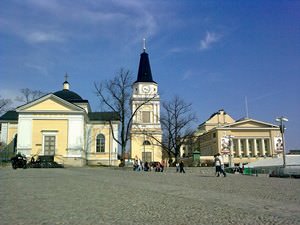 The main cultural symbol of the city is the Tampere Cathedral. The construction of religious buildings was started in 1902 and lasted a little more than five years. The majestic and stately building of the cathedral is considered to be the most important decoration of Tampere; it features a refined architectural style and a luxurious interior. Cathedral is constructed​​ in the best traditions of national romanticism; all visitors are recommended to see this gem of world architecture.
Guide to Tampere sightseeing - things to see and to visit
In terms of popularity Tampere occupies the second place and loses to only one resort of Finland - Helsinki. The choice of attractions and tour itineraries here is no less diversified as in …

Open
A striking example of neo-Byzantine architecture is the Orthodox Church of St. Alexander Nevsky and St. Nicholas. This religious building reminds locals of a time when their country was part of Tsarist Russia. It should be noted that only a couple of monuments of this style have survived in Scandinavia, which makes the church even more unique.
The Kaleva Church is the monument of the later period. It was built in 1966 and is a true example of Art Nouveau. The stately building of iron, concrete and glass looks simply irresistible; for connoisseurs of architecture Kaleva Church is the embodiment of the most courageous and progressive modern trends. An incredible number of museums and galleries operate in Tampere; each cultural venue can boast of a unique collection of exhibits. Copyright www.orangesmile.com
Cuisine of Tampere for gourmet with top restaurants and cafe
Tampere is a city with an abundance of dining places. Almost every local restaurant has an interesting legend and is ready to surprise its visitors not only with lots of branded treats, but …

Open
Travelers staying on vacation with children have to include a visit the Haihara Doll Museum to the excursion program. It is located in the picturesque old mansion, which is also of great architectural and historical value. The museum exhibition consists of more than four thousand antique dolls that were brought from different parts of the world. The age of the oldest exhibits is more than nine centuries. Haihara remains one of the most visited cultural venues of the city. 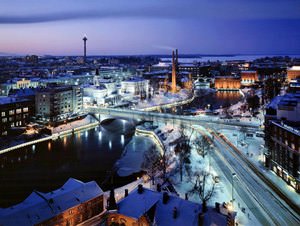 There is also the Lenin Museum (Lenin-Museo) in Tampere; every year it is visited by more than 15,000 visitors. The exposition of the museum tells about the life of the proletariat leader. The museum has become a regular venue for various exhibitions and cultural events associated with Soviets. The museum's collection is very diverse, so the tour promises to be informative and interesting. This is only a small part of the amazing attractions that visitors can see in Tampere.

This guide to cultural sights Tampere is protected by the copyright law. You can re-publish this content with mandatory attribution: direct and active hyperlink to www.orangesmile.com.
Tampere - guide chapters 1 2 3 4 5 6

What to visit during two-day excursion in Tampere

Finland is a beautiful northern country, considered the embodiment of Nordic exotics. In a relatively small area, surrounded by beautiful natural landscapes, there are many ancient castles and fortresses, unique museums, and interesting places that cannot be found anywhere else. The colorful sights of Finland are silent evidence of the history of the amazing land. One of the most distinguishable places is the Senate Square in Helsinki, where all the tourists who come to the country go. The architectural ensemble of the square is represented by buildings in the style of late classicism. The simplicity and laconicism of the buildings give the square a stern and solemn appearance. … Open

Photogallery of cultural heritage of Tampere

Excursions over cultural sights of neighbours of Tampere

Lahti
Lahti has the largest theater in Finland, which is visited by more than 100,000 spectators every year. The theater is equipped with three large halls where performances of various genres are staged every day. Guests of the theater will have the opportunity to visit modern musicals and classical performances. A special theater program is prepared for children. The theater ... Open »
Helsinki
Sederholm house is a sight that is definitely worth making a visit. The house, which was built in 1757, is located in the historic district of Helsinki. Currently, the oldest building of Helsinki has become the location of a museum, which exposition is devoted to the history of merchant life. Among the cultural institutions of Helsinki we should definitely underline Arena ... Open »
Tallinn
The majority of historic places of interest are located in the territory of Old Town. Town Hall Square is considered the center of the historic district of Tallinn. Near the square one can see not only many beautiful old buildings, but also numerous restaurants and cafes. The Town Hall building is located just a few steps away from the square. This is a magnificent building in ... Open »
Narva
Among religious monuments, Narva Issanda Ülestõusmise peakirik is considered one of the most outstanding. It was built at the end of the 19th century and has been the main Orthodox church in Narva since its foundation. The construction of the church was initiated by order of Alexander III of Russia. It is a spectacular architectural monument in the Byzantine style. Ancient ... Open »
Parnu
This small resort city boasts a great variety of historical and architectural monuments and landmarks. Local people are rather respectful of their history and culture and proudly showcase their cultural heritage to foreign guests. Tourists will discover old castles and churches, amazing museums and theaters. The Eliisabet’s church is a remarkable religious landmark ... Open »
Uppsala
Speaking of outstanding cultural institutions we should mention the Linnemuseet. In addition to personal belongings of Carl Linnaeus, the exhibition includes a rich collection of old books. The huge interest attracts Linnetradgarden Botanical Garden located next to the mansion. The garden was founded by the scientist in 1741; currently, there are about 1,300 plants in its ... Open »

Culture guide to Tampere. Which fascinating sights to visit once you are in Tampere: temples, churches, museums, theaters and castles. Recommendations (with addresses, phone numbers and links) on the places 'must visit' in Tampere. Plan your own city excursion by using this page info!