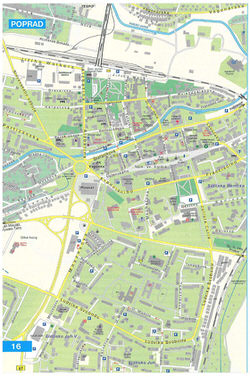 Interactive maps of hiking and biking routes around Poprad

1. You can zoom in/out using your mouse wheel, as well as move the map of Poprad with your mouse.
2. This interactive map presents two modes: 'Biking Routes' and 'Hiking Routes'. Use the '+' button on the map to switch between them.

This Poprad map has two modes: 'Railway Network' and 'Landscape & Rural Map'. Use the '+' button on the map to navigate.

City tours, excursions and tickets in Poprad and surroundings

Our guide to Poprad

It’s a famous ski resort situated at the foot of the High Tatras. The first mention of the city is referred to the middle of the 13th century, but at that time Poprad wasn’t yet a large settlement. It was a group of small villages, which were combined and gradually achieved the status of the city. Nowadays the territory of the city is conventionally divided into three separate settlements: Spisska Sobota, … Open

Poprad is famous for its religious monuments, and the Co-Cathedral of Our Lady of Sorrows is one of the most beautiful and unusual of them. Its construction lasted three years and was fully completed in 1939. If you look at the cathedral today, you'd barely believe that it was built almost a hundred years ago. The building looks very modern, the cathedral is striking in its scale. Its length is 48 meters, and the … Open

Maps of Vysoke Tatry
A lot of interesting things are waiting for fans of cross-country skiing. There are almost two dozen kilometers of trails of different levels near the town. They will appeal to both beginners and experienced athletes. There are also 58 kilometers of trails for skiers and snowboarders here. It is worth climbing to the top of Hrebienok for those who love to overcome ... Open »
Maps of Zakopane
The most popular route for hiking is the climb to the mount Gubałówka. Its peak is the most accessible. There is no need to have some special skills for lifting there. Thrill-seekers will find a pleasant surprise here too. There is a great attraction, which is a bit like the classic "roller coaster". Those who prefer a more relaxing holiday, will have an opportunity to visit ... Open »
Maps of Kosice
Entertainment centers worth mentioning include Rebuy Stars Košice, which attracts gamblers. Slot machines and roulette tables are available here for those wishing to try their luck. The facility itself is nicely decorated, which pleases they eye and brings aesthetic pleasure. Well, one of the most popular tourist spots is Detská Železnica Košice where one can take a ride ... Open »
Maps of Banska Bystrica
If you visit the city in winter, you'll have the opportunity to have fun at the local ski resorts. Ski Resort Tale with its excellent ski zones of various difficulty levels is less than 1 kilometer from the city. Most of its ski slopes are gentle, so the resort is popular with beginners and vacationing families with kids. The resort is located in an amazingly beautiful ... Open »
Maps of Krakow
The third way to learn Krakow is by means of the cruise boat. From the pier under the Wawel Hill, river trams leave for the hour-long mini-cruises along the Vistula. During the trip, the ships manage to swim to the Kosciuszko mounds, swim under a pair of bridges, past two monasteries and the futuristic building of the Center for Japanese Culture. But, naturally, the special ... Open »
OrangeSmile.com - online travel reservation expert providing reliable car rental and hotel booking services. We feature more than 25.000 destinations with 12.000 rental offices and 200.000 hotels worldwide.
Secure Server