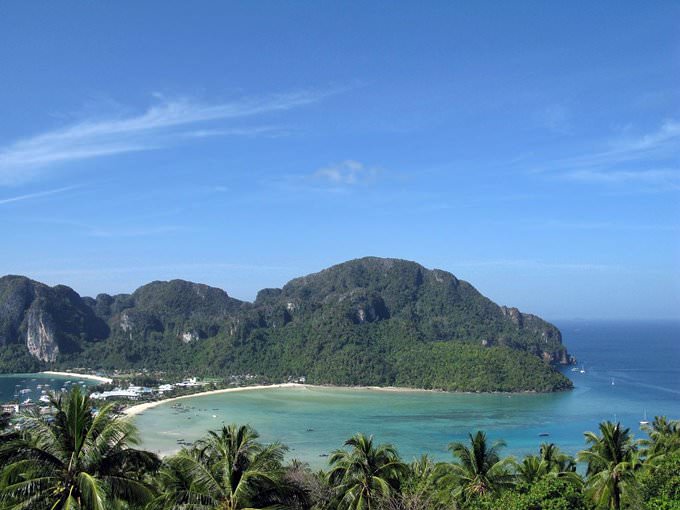 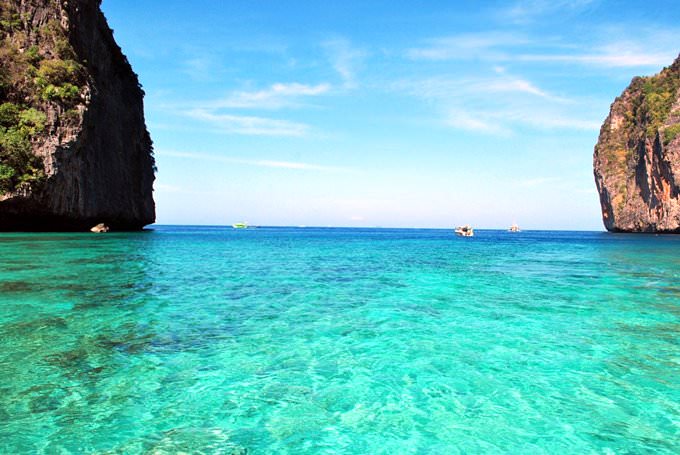 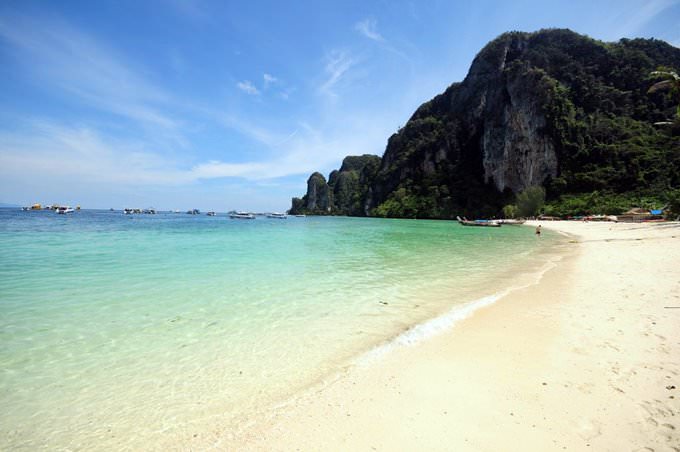 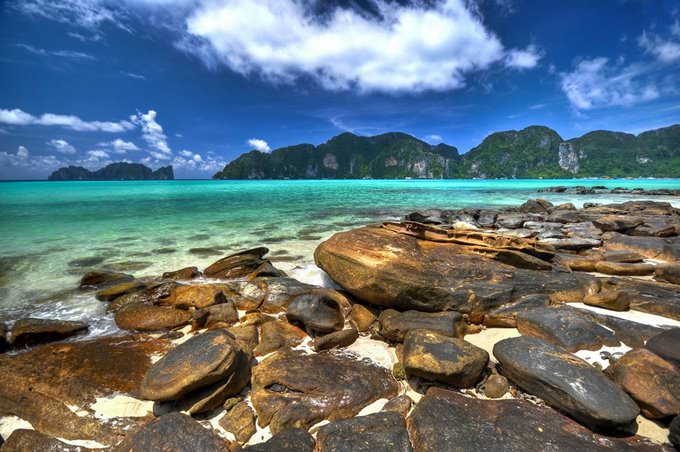 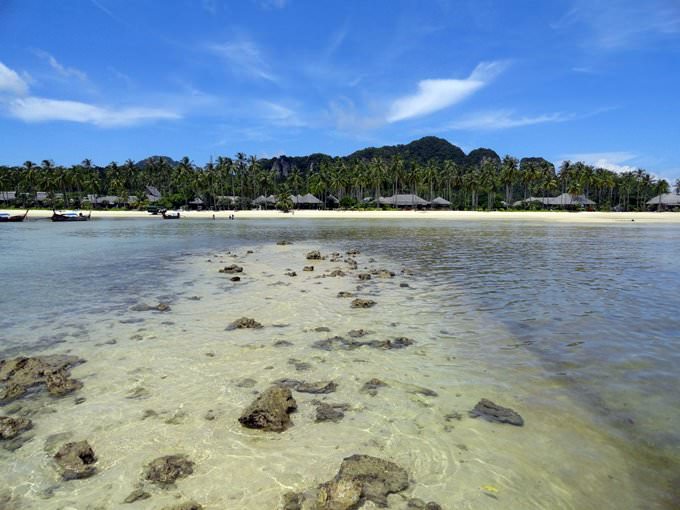 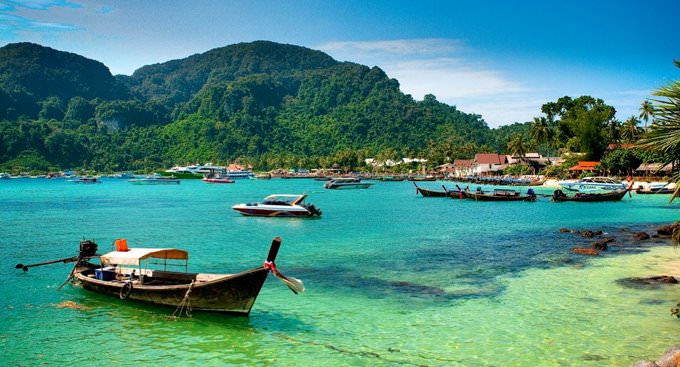 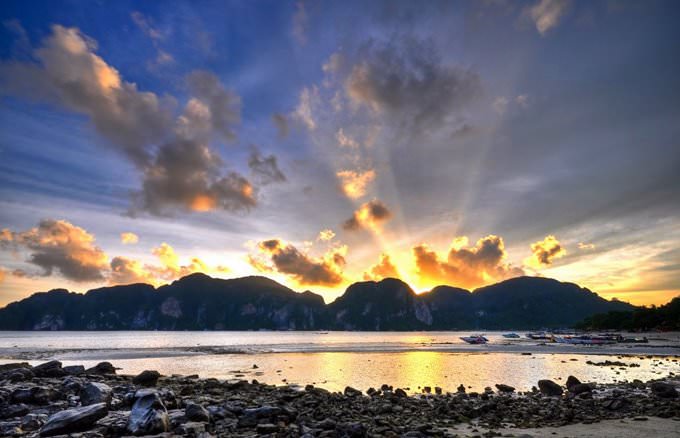 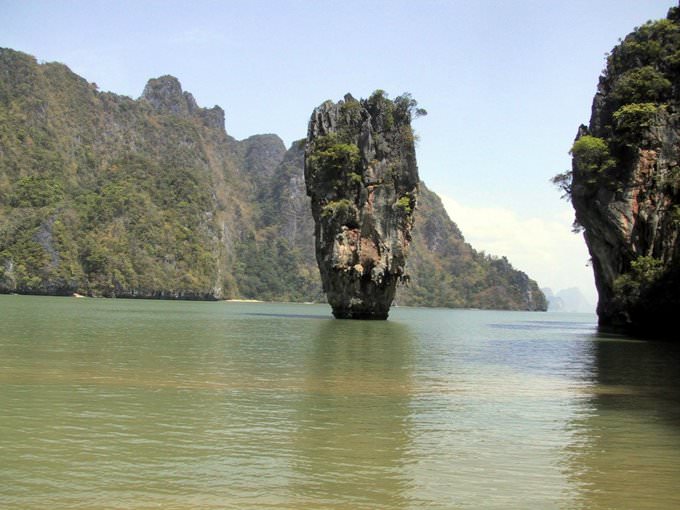 Chapters of the guide to Phi Phi Islands

You can find wonderful and worthy diving sites around the island. Fans of diving can see a lot of interesting underwater attractions here. One of the most interesting ferries is King Cruiser that sank many years ago and has not been lifted to surface. Near Phi-Phi Lei, there is another shipwreck but it was sunken intentionally. These places are also famous for a diversity of underwater caves and beautiful … Open

Nature lovers like Loh Bagao bay surrounded with vast coconut plantations. Its water is of unusual emerald hue that creates harmonious contrast with sandy coastline. There are several upscale resorts next to the beach; these places enjoy continued popularity among fans of red-carpet vacations. Despite its immense popularity, the bay is characterized by very calm and measured atmosphere, and there is nothing to … Open

4. Purchasing a ticket for the ferry, don't buy a return ticket. The fact is that when you purchase ticket for the return journey at once, you can overpay a lot, though traders say that it is very profitable. 5. Travelers who visit the island during the high season are advised to book a hotel room in advance. At the high tourist season there is always a shortage of hotel rooms available and only the most … Open

Among Thai restaurants, Le Grand Blue is notable. It serves not only popular national dishes, but also French delicacies. One of the most demanded dishes is chicken with spicy seasonings; seafood fans will appreciate a large selection of amazing fish dishes. In addition to specialties, guests will enjoy a glass of fine wine. The Pad-Thai restaurant is very attractive; a selection of exotic local dishes here is … Open

These islands have long been chosen by fans of deep sea fishing and scuba diving, as there are excellent conditions for water sports. One of the most interesting underwater sights is sunken liner, King Cruiser; divers are sure to be impressed by the beauty of underwater caves and tunnels. One can book a tour to remarkable dive sites in one of the numerous diving centers. One of the busiest areas of Phi Phi Don is … Open

Villa360 hotel complex is attractive in all respects. Tourists who prefer to stay away from noisy resorts would like it. Attractive villas are decorated in contemporary style; each of them has a stylish bathroom with panoramic view of the coast. The hotel has its own travel agency and great day spa; the territory features a beautiful relaxation area with infinity pool and sun terraces. One of the best places for a … Open

Search touristic sights on the map of Phi Phi Islands

Ban Khlong Muang
Near Muang, there are lots of interesting natural sites. Shell Fossil Beach is one of such places. It is a unique rock formation that appeared over 75 million years ago. The surface of the rock is covered with a layer of shells; there are only a few formations of such kind in the world. You can see the petrified shells of prehistoric molluscs on the rock, which is of great ... Open »
Ko Lanta Island
The local Sea Gypsy Village is just a must see! Sea Gypsies are an ethnic minority who has been living on the Asian islands for many centuries. They are famous as people who don’t know what civilization is at all. They don’t incorporate with other ethnic groups and never change their way of living in spite of technical progress. People still live in houses on piles and do ... Open »
Krabi
The city also has a Catholic church - St Agnes Catholic Church. The church is not large but decorated in quite an unusual style - both outside and inside. Such a unique church cannot be found anywhere else - and this is precisely what attracts many tourists. Another peculiarity is that one needs to remove shoes before entering - this is the tradition. Nearby is the wonderful ... Open »
Ko Lanta
There is a small lighthouse nearby. It still works. There are dangers for sailors in the small bay of the Old Town. This can be seen if you look at the sea surface: the masts of a recently sunken ship stick out not far from the shore. Be sure to take a walk through the streets of the settlement. It is better to do this at sunset or at dawn. Small one-and two-story houses, ... Open »
Phuket
Another marvelous temple is located near the Chalong beach. Its officers are rather cordial and hospitable being always ready to tell the guests about local way of life. The most famous nature attraction of the Phuket island is the Khao Phra Taew national park. The park features scenic tropical forests of incredible beauty, fantastic waterfalls and a variety of exotic plants ... Open »
Langkawi
As for natural attractions, of great interest are Air Terjun Telaga Tujuh Waterfalls, Hutan Lipur Air Terjun Temurun Nature Reserve, and Langkawi Wildlife Park. All these places are extremely picturesque and deserve visiting as much as famous cultural attractions of the island. De'Zone is an interesting place to explore the local culture located in the city of Kedah. Among ... Open »
OrangeSmile.com - online travel reservation expert providing reliable car rental and hotel booking services. We feature more than 25.000 destinations with 12.000 rental offices and 200.000 hotels worldwide.
Secure Server