Sightseeing in Chiang Rai - what to see. Complete travel guide 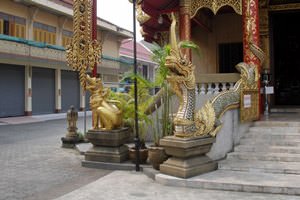 This city is founded by King Mengrai in 1262. For a long time it had remained the capital of the independent kingdom of Lanna, which was later conquered by the Burmese. Today Chiang Rai (or Changwat Chiang Rai) is the administrative center of the eponymous province located in the north of the country.
Your active city break in Chiang Rai. Attractions, recreation and entertainment - best places to spend your day and night here
Chiang Rai offers a decent selection of entertainment options for fans of active pastime. Baan Zen Yoga Reiki Chakras balancing is the unique leisure center. It is a massive and beautifully …

Open
This area is interesting due to the fact for a long time only impassable trails have connected it with the rest of the country. Northern Thailand is considered the cradle of the unique and amazing Thai culture. Here the traditions of this amazing country have been preserved in complete isolation from the influence of other cultures.
Chiang Rai is famous for its vats (Buddhist temples). According to a legend once the Emerald Buddha statue has stood here. Later it has appeared in Bangkok. One of the local churches (Ngam Muang Hill) keeps the tomb with the remains of King Meng Rai. Copyright www.orangesmile.com
Advices to travellers: what you should know while being in Chiang Rai
1. Fans of the evening entertainment have to consider that after 9:00 pm the city literally freezes, as the majority of dining places and shops are closed. In the evening, the busiest place …

Open
The nature of northern Thailand is also unique. Bright and rich colors of mountain sceneries surround the city and fascinate thousands of tourists who come to visit these places. We suggest making a route from Chiang Rai to the Doi Tung and Doi Mae Salonga Mountains in order to enjoy the beauty of tropical forest that hides ancient temples and panoramic landscapes from with their peaks. On your way you can visit the villages of the local tribes. 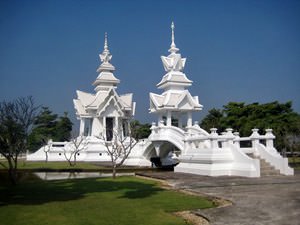 The Wat Umong Temple is included in the list of the most unusual temples in the country. It was found not so long ago, in 1927. The ground part of the temple looks quite usual. Its main mystery is its underground part. There are natural caves connected by tunnels and illuminated with candles. The main values of the temple are multiple statues of Buddha, some of which are really old.
Cuisine of Chiang Rai for gourmet with top restaurants and cafe
Local dining places have not only a good choice of various dishes, but also attractive prices, so a holiday in Chiang Rai would satisfy even the thriftiest travelers. The I Buoni a Nulla …

Open
On the hilltop, there is the Wat Phra That Chomkitti Temple. It is recognized as one of the oldest churches in the district. According to some data, the city was formed exactly around the temple after its building. Over the years, the temple has lost its original status and laid in ruins by the end of the 20th century. The temple has recently been restored. To reach it, you will have to climb the stairs of 383 steps. 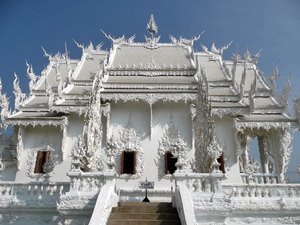 The most unusual cultural center in the city is the Opium Museum. Thailand has long been one of the world leaders in its production. Thanks to opium, a lot of important drugs saving thousand people’s lives have been invented. Its unique properties are actively used in medicine now. The themed museum houses a multifaceted collection of exhibits including old production tools, different agricultural tools and modern interactive equipment.
Authentic traditions, festivals and lifestyle of Chiang Rai inhabitants
Chiang Rai is often called the city of endless festivals, as a lot of interesting events are held here throughout the year. Its brightest holidays are held in February, April and November. …

Open
The trips to the village of Santikhiri are very popular with fans of walks along picturesque places. There is one of the largest tea plantations in the country that has long gained a status of the popular attraction. Everyone can see how tea bushes grow. You also can see how the tea leaves are collected and even take part in this activity. In the vicinity of tea plantations, there are fast fruit gardens that are open for visitors. 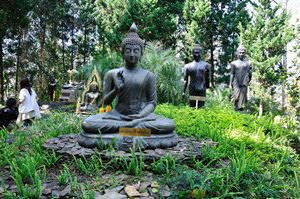 In the picturesque mountainous area, there is the Botanical Mae Fah Luang Garden. Its visitors can admire rare decorative plants and flowers. At one time, there were vast rice plantations on the territory where the garden is located. Afterwards, the natives decided to found the beautiful garden here. Besides rare plants, it is decorated with many interesting sculptures.

This guide to iconic landmarks and sights of Chiang Rai is protected by the copyright law. You can re-publish this content with mandatory attribution: direct and active hyperlink to www.orangesmile.com.
Chiang Rai - guide chapters 1 2 3 4 5 6

City tours, excursions and tickets in Chiang Rai and surroundings

National and city parks around Chiang Rai
♥   National Park 'Sai Thong' , 1.9 km from the center. On the map

Sightseeing in Thailand: things to see

Thailand remains one of the biggest centers of tourism in the world. Hot beaches, beautiful and diverse nature, and rich choice of places of interest let every traveler select a program to fit one's taste. Bangkok remains one of the most favorite destinations for travelers. Wat Pho or the Temple of the Reclining Buddha built in the 7th century is the main landmark of the central square. The 15 meter long statue of Buddha is the main decoration of the temple. The statue is decorated with mother of pearl and skillful carving. Walls of the temple feature amazing paintings that depict Buddha and his apprentices. There is a gallery on the temple territory, where visitors will see a collection of rare figurines. There are approximately 400 items in total. … Open 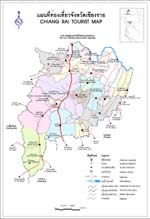 Search touristic sites on the map of Chiang Rai

Sightseeing in regions nearby Chiang Rai

Chiang Mai Region
Thaton is perfect to explore the culture and traditions of the indigenous population. Local residents have cherished their amazing traditions for many hundreds of years; indigenous people are happy to represent their culture to foreign guests. Among the natural attractions, Doi Inthanon reserve featuring the mountain with the same name deserves special attention. It’s ... Open »
Chiang Mai
This is one of the largest cities of Thailand, which continues growing actively. The city's name can be read differently, but when translated from Thai it means "new castle". This ancient cultural center was built in the end of the XIII century and founded by king Mengrai. It is believed that Thailand attracts visitors primarily as a beach rest destination. However, this city ... Open »
Bago-Pegu
Once again, people had to rebuild the pagoda. In modern days, Mahazedi Pagoda is a beautiful golden building that attracts numerous guests from all over the world. The entrance to the pagoda is decorated with two white elephants. Of course, these are statues but they look simply impressive. There is also a pavilion with a seven-tiered Pyatthat roof in front of the pagoda. ... Open »
Mandalay
Eye-catching Mandalay is the second-largest city in Myanmar (former Burma). This city is internationally famous as a large Buddhism center. Mandalay is home to more than seven hundred pagodas, each of which amazes visitors with its beauty and grandeur. Every year, thousands of pilgrims arrive in this city to perform sacred rituals and pray. This land full of secrets and mystery ... Open »
Bagan
Long time ago, people founded a settlement and called it Bagan. This ancient city in Myanmar is also famous as “the city of a thousand temples”. It is a miracle that this historical site has survived until our days. In modern times, more and more tourists become interested in visiting Myanmar and Old Bagan. What are they searching for? This is an absolutely unique place ... Open »
Hanoi
The historical district of Hanoi is very interesting for travelers. It could keep its fascination from previous years. Long ago craftsmen and merchants decided to live there. They pass the traditions of ancient crafts from generation to generation. It is easy to take bearings there. The name of each street speaks for itself. There is the Jewelry street here where you can buy ... Open »

All about Chiang Rai, Thailand - sightseeings, attractions, touristic spots, architecture, history, culture and cuisine. Prepare your trip together with OrangeSmile.com - find out the 'must see' things in Chiang Rai, which places to visit, which excursions to take, where the breathtaking views are waiting for you. Planning your trip with this travel guide will help your to get the most out of Chiang Rai in few days.