Cultural sightseeing in Malaysia. What to visit - museums, temples, castles and palaces 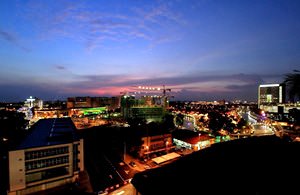 Malaysia is one of the best places for people who want to spend their holidays in a bright and exotic way. You can view both historical and natural attractions and see the legacy of bygone eras here. The country's rich history has left many historical attractions of varying degrees of preservation on its territory. Sultan Abdul Samad Building is one of the most beautiful old buildings in Kuala Lumpur. It was built in an ornate Oriental style with elements of Victorian architecture. The building was built for the British administration at the end of the XIX century. The Grand temple of Sri Mahamariamman is dedicated to the Hindu deity Mahamariamman, who protects from diseases and various troubles. The Central tower attracts the eye. It consists of several tiers.
Unique sights of Malaysia from our series 'Extreme places on Earth'
These spots really worth the attention of a real traveler-researcher. …
Read further
Malaysia will also be interesting for museum fans. The Islamic Arts Museum was opened to the public in the late 90s of the last century. A four-story building in a modern style was built in Kuala Lumpur specifically for the museum's exhibition. The collection contains about seven thousand artifacts. It includes various editions of the Koran, ceramics, weapons, and samples of calligraphy. There are 10 halls in the museum. They also contain items made of gold, dishes, armor, and models of famous buildings. The Maritime Museum is also fascinating. This is actually a museum of one ship. Of course, it was impossible to raise a Portuguese ship of the XVI century from the seafloor. However, it was possible to create an exact copy of it. An interesting exhibition is located in the museum building.
St. Mary's Cathedral is one of the oldest Anglican churches in Malaysia. It was built on the site of a former wooden church during the British colonial administration. The Cathedral was built in the late Gothic style. It looks like a typical English church. Suffolk House is another building reminiscent of British rule. It is also called the first "Great House" of Penang. It is one of the most important monuments of Penang's colonial heritage. The mansion is more than 200 years old. It is located in the suburb of George Town. It was built in the Georgian style by Francis Light, the founder of George Town. The house has served as the residence of several governors over the years. It was also the house of the government. The house was in disrepair by the middle of the XX century. However, it has acquired its original appearance after major repairs. The Stadthuys recalls the times of Dutch rule. This is the city hall, which is located in the city of Malacca. The building of the XVII century is perfectly preserved. It is used for the collection of the Historical and Ethnography Museum today. Copyright www.orangesmile.com
Top architectural sights of Malaysia
Monuments and architectural objects, notable for the history and culture of the country. …
Read further
You should also visit the modern buildings that have become the hallmark of the country. For example, these are the impressive Petronas Twin Towers. Each of them has 88 floors. They are not the highest in the world today. However, the architectural complex is undoubtedly one of the most beautiful high-rise structures on the planet. The Menara TV Tower is slightly lower in height than the Twin Towers. But a great view of the surrounding area opens from its observation deck. There is a restaurant at an altitude of more than 200 meters. It is better to book seats in it in advance. The Langkawi Sky Bridge is another modern but extremely impressive landmark. It spans the gorge. It is located above the gorge at a high altitude. A complex engineering solution was required to create the bridge.

Istana Negara Palace is the official residence of the monarch of the country. The entrance to the palace is closed to the public. Tourists can admire the impregnable walls and the impressive changing of the guard. The limestone natural Batu Caves are also a large Buddhist temple complex. A huge statue of the Murugan is located here. Some caves are used for religious rituals. Some of them are open to the public as natural attractions. You can also see the unique caves in the Niah National Park on Borneo Island. Several species of bats live in caves. Also, traces of the presence of cavemen were found here. The reserve was created to preserve them.
Malaysia sightseeing - top places to visit
Currently, Malaysia has become a famous destination for the so called eco-tourism. Tourists are offered to attend excursions in famous nature …
Read further
The Putra Mosque in the city of the same name was built at the end of the last century. It is one of the most beautiful Islamic temples in the world. Its picturesque location on the lake and the sophisticated Oriental architectural style in which it was built contributes to this. The mosque resembles a pink fairy-tale palace or a sponge cake from afar. 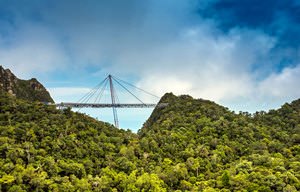 A giant Buddha statue greets guests at the Perak Cave Temple near Ipoh. The walls are decorated with drawings. A stunning view opens from the observation deck at the entrance.

This article about cultural sites of Malaysia is protected by the copyright law. You can re-use the content, but only under the condition of placement of an active link to www.orangesmile.com.
Malaysia guide chapters 1 2 3 4 5 6 7 8 9 10 11 12 13

Cathedrals and basilicas in Malaysia
♥   Cathedral of St. John, Kuala Lumpur. On the map

♥   Cathedral of the Holy Spirit, George Town. On the map

♥   Church of the Assumption, George Town. On the map

♥   Cathedral of St. Mary, Sandakan. On the map

Palaces in Malaysia
♥   Palace 'Istana Abu Bakar' . On the map 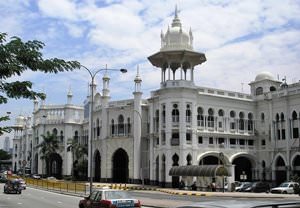 The building of the old railway station has placed right in the centre of Kuala Lumpur. This building is in a list of outstanding historical monuments of the city. This elegant colonial building was finished in 1910 by the project of an English architect – Arthur Benison Hubback. He has built a number of other old houses in the city. Kuala Lumpur Sentral is considered the major railway hub of Malaysia at last 100 years.

Over the last years the station has definitely changed. Its inner halls were completely redecorated and fitted out with modern air-conditional systems and information displays. In 2007 there was opened the Railway Museum. Some parts of the exposition are presented on the station’s platforms. Visitors can make acquainted with old locomotives and carriages, other things … Read all 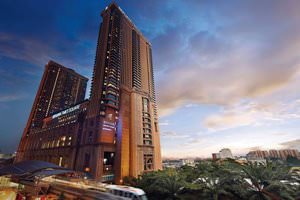 The real point of interest in Kuala Lumpur is the mall "Berjaya Times Square". It is placed in two towers and is very interesting from the architectural point of view. Apart from shops and gastronomical stores a huge hotel for 1 200 rooms is placed here. There you can find a wonderful entertainment park and a cinema for fans of active leisure time.

Those, who are interested mainly in the shopping, can visit over one thousand of shops. Twin tower, where the mall is located, is over 203 meters high and were built at the beginning of the 20th century. These skyscrapers are the highest buildings in Malaysia. The shopping area is over 300 000 square meters. Tourists, who decide to spend the day in this unique shopping and leisure center, have an opportunity to see a lot of interesting.

They … Read all
All unique sightseeing Malaysia 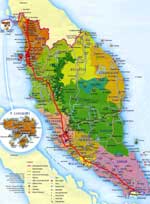 Famous sites of culture and history of Malaysia in photoset

Culture and monuments in popular cities of Malaysia

Kuala Lumpur
Nearby is the Textile Museum; there you can see a fine collection, which will be interesting for everyone. In addition to original textile, museum's collection includes products from beads, hand embroidery and rosaries, as well as a lot of other beautiful handicrafts. An old English cathedral, St Mary's Church, is also situated in historic district. It had been founded in 1984, one hundred years later a large-scale reconstruction of the church had begun, and in 1989 part of the old building has … Read more

Kota Kinabalu
As for cultural institutions, the most interesting and visited one is Sabah State Museum. It is housed in a quite unusual structure built in the image of traditional huts of the Murut and the Rungus people. The collection of the museum's exhibits is very diverse, including unique historical artifacts, ancient jewelry and artworks, handicrafts and household items demonstrating specific features of the life of the indigenous population. One of the most interesting expositions is the one … Read more

Johor Bahru
There are many notable temples that are worth a visit in Bahru, and the magnificent Arulmigu Sri Rajakaliamman Hindu Temple is definitely one of them. This spectacular landmark was constructed in 1922. Nowadays, it’s a unique architectural landmark of the international importance. Arulmigu Sri Rajakaliamman is the first Hindu temple that is completely made of glass. The latest extensive restoration of the temple finished in 2009. More than 90% of the building is covered with the beautiful … Read more

Langkawi
The Perdana gallery is considered the most famous attraction located in the suburb of the capital. Its collection includes more than 2,500 exhibits, such as ceramics and crystal, beautiful prizes and old paintings. The most exhibits represented in the gallery are awards handed by Mahathir Mohamad, the former Prime Minister of the country. Notable attractions of the island are numerous caves; each of them is a unique creation of nature. In Gua Cerita cave scientists have discovered ancient … Read more

Penang
The Penang Bridge is one of the main symbols of the island connecting the island with the continent. The total length of the bridge is 13.5km being the third in the world by its length. Tourists should take a tour over the bridge as it offers unforgettable panoramic views being a perfect background for memorable photos of a journey. Among religious landmarks of the destination the Snake Temple is one of the most interesting objects to visit. The temple is remarkable not only for its unique … Read more

Melaka
Not far from the central square there is Saint Paul hill with the church of the same name. Walls of the church are housing many religious artifacts; travelers are also attracted by an opportunity to evaluate the panorama of the city from comfortable viewing platforms. One of the most beautiful and interesting places for walking is Chinatown; its picturesque streets are full of interesting landmarks. There you can see some beautiful mosques, temples and old stores, which are operating today. … Read more