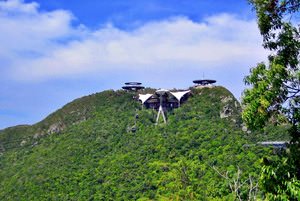 It’s recommended to begin exploring the archipelago from its capital, Kuah Town. In the center of the town there is a picturesque square, Dataran Lang, which is decorated with graceful bridges and covered terraces, artificial ponds and fountains. It’s possible to admire the splendor of this place endlessly. A few steps from the square, Taman Lagenda park is located; it is a real open-air museum. In the park there is a unique collection of artifacts that display the most striking and mysterious legends of the island.
Shopping in Langkawi - main shopping streets, outlets and boutiques
Langkawi has a number of excellent shopping centers where one can not only buy some new thing but also have a great rest. Langkawi Parade Megamall offers its customers a choice of more than …

Open
The Perdana gallery is considered the most famous attraction located in the suburb of the capital. Its collection includes more than 2,500 exhibits, such as ceramics and crystal, beautiful prizes and old paintings. The most exhibits represented in the gallery are awards handed by Mahathir Mohamad, the former Prime Minister of the country. Notable attractions of the island are numerous caves; each of them is a unique creation of nature.
In Gua Cerita cave scientists have discovered ancient inscriptions and drawings; plan to decipher the ancient message has failed. In the beautiful mangrove forest is located Gua Kelawar cave. Its main inhabitants are bats. An important cultural object is located near Pasir Tengkorak beach. We are talking about the Museum and Cultural Foundation. The founder of the museum was the famous Malaysian artist Ibrahim Hussein. Foundation visitors can see a rich collection of paintings, which relates to several epochs. Copyright www.orangesmile.com
Guide to Langkawi sightseeing - things to see and to visit
Langkawi is the largest island of the archipelago that consists of 99 units. It is located on the territory of Malaysia close to the border with Thailand not far away from Adamant Sea in the …

Open
The Complex of folk art, which is just a short drive from the Gulf of Teluk Yu, is also interesting to see. This is a one-stop center, where visitors can not only enjoy the beautiful crafts of local artisans, but also can buy their favorite exhibits. One of the most important historical sites of the island is the tomb of Princess Mahsuri located near Kuah. The name of the princess is associated with many interesting legends. She was unjustly accused of adultery and cursed to the island before the execution, which subsequently underwent a strikes and mass disasters. More than two centuries after the death of Princess, Langkawi was in complete desolation, the element has taken lives of thousands of people. These are just a few unique attractions that would be interesting for guests of the archipelago. 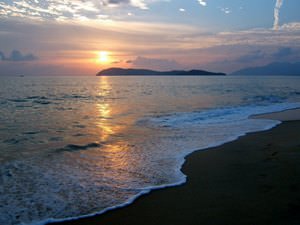 Among other attractions of the island is the museum Atma Alam Batik Village located in the city of Kedah. Here you can watch the process of creating products from batik, and it must be said that this craft is very delicate. In the museum, you can find a souvenir shop where goods made by local craftsmen are available for sale, there is also an exhibition of works of fine art created with the use of batik. Here you can try yourself as a weaver and create an ornament with your own hands. No less interesting is the Believe Langkawi (can be found in the capital) demonstrating all the fears of humanity in paintings. It should be noted that the artworks themselves are not horrible at all, and after visiting the museum, you can take a different look at your phobias and fears, overcoming them.
Family holidays with kids in Langkawi. How to entertain your child, things to show to children.
Langkawi is a great place for a family holiday, where active entertainment can be combined with interesting excursions. There are excellent entertainment centers here for children. At the …

Open
Rice is an important part of Malaysian gastronomy, and it is therefore not surprising that a separate museum is dedicated to this particular product. It is called Muzium Laman Padi and is located in the same city of Kedah. This is an unusual place where during the tour tourists are told about everything they wanted to learn about picking up rice and what can be made of this cereal. Besides, here you can learn about other products that play an important role in local cuisine - for example, coconuts and spices. Another interesting local museum is called Tiger! Tiger! where, as the name implies, tigers of all kinds are presented. The museum is located in the capital of the island. 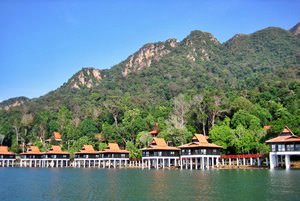 Langkawi boasts a lot of interesting religious attractions including Wat Koh Wanararm in the capital city of Kuah. The Buddhist temple is not large but very attractive from an architectural point of view. A fish pond and several beautifully executed statues of Siddhārtha Gautama deserve attention as well. Also, the shrine is remarkable for its atmosphere - it is incredibly spacious and peaceful here. In Kedah, you will find D'Coconut Hill Resort in order to discover an excellent observatory, one of the best places to visit in Langkawi.
Cuisine of Langkawi for gourmet with top restaurants and cafe
Culinary traditions of Langkawi represent a unique combination of Chinese, Indian and Thai traditions. In addition to national cuisine restaurants, eating places that specialize in cooking …

Open
As for natural attractions, of great interest are Air Terjun Telaga Tujuh Waterfalls, Hutan Lipur Air Terjun Temurun Nature Reserve, and Langkawi Wildlife Park. All these places are extremely picturesque and deserve visiting as much as famous cultural attractions of the island. De'Zone is an interesting place to explore the local culture located in the city of Kedah. Among its exhibits, one can see beautiful hand-made jewelry, wooden, and ceramic products made by local artisans. Here is a souvenir shop for those who wish to keep a tangible proof of the wonderful time spent on the island.

In the section below, you can get one of our excursion, activities or city discovery tours over Langkawi and surroundings. Our website offers 10-30% lower ticket prices, when compared to the offline purchase on the spot.

City tours, excursions and tickets in Langkawi and surroundings

This guide to cultural sights Langkawi is protected by the copyright law. You can re-publish this content with mandatory attribution: direct and active hyperlink to www.orangesmile.com.
Langkawi - guide chapters 1 2 3 4 5 6 7 8 9 10 11
Reference information
Map of all palaces

Public palaces near Langkawi
♥   Palace 'Istana Arau' , 55.6 km from the center. On the map

St. Mary's Cathedral is one of the oldest Anglican churches in Malaysia. It was built on the site of a former wooden church during the British colonial administration. The Cathedral was built in the late Gothic style. It looks like a typical English church. Suffolk House is another building reminiscent of British rule. It is also called the first "Great House" of Penang. It is one of the most important monuments of Penang's colonial heritage. The mansion is more than 200 years old. It is located in the suburb of George Town. It was built in the Georgian style by Francis Light, the founder of George Town. The house has served as the residence of several governors over the years. It was also the house of the government. The house was in disrepair by the middle of the XX century. However, it has acquired its original appearance after major repairs. The Stadthuys recalls the times of Dutch rule. This is the city hall, which is located in the city of Malacca. The building of the XVII century is perfectly preserved. It is used for the collection of the Historical and Ethnography Museum today. … Open

Photogallery of cultural heritage of Langkawi

Excursions over cultural sights of neighbours of Langkawi

Penang
The temple presents a unique fusion of Thai, Chinese and Burmese architectural traditions. Close to the marvelous building tourists will find the Ban Pa Thar pagoda of the same incredible glory. One of the most exciting and original cultural objects of the island is considered to be the War Museum of Penang. The cultural establishment is located on the ruins of British fortress ... Open »
Ko Lanta
Traders from the Middle East and China have used the port as "transshipment point" for many years. Today, the local architecture is similar to Thai and differs from it a lot at the same time. Many compare the Old Town of Lanta with Hoi An in Vietnam. The island's capital was located here until 1994. After the construction of the new port in Ban Saladan, which was larger in ... Open »
Ko Lanta Island
Nevertheless, the present name was given to the island about a century ago in the time of Rama V’s regiment. Well, one of the most peculiar sights here is the Old City. Tradesmen from China and Arab countries had been using the local harbor as a transit point for many centuries so it definitely influenced the local architecture. For instance, the local Old Port reminds ... Open »
Krabi
Not far from it the stairway is located, on which everyone can climb to the top of the hill and appreciate the panorama of the island. The stairway has 1237 steps, so climbing will be a good exercise for the curious traveler. On the island archaeological excavations were held for many years. During that time scientists have found a number of unique artifacts. You can see those ... Open »
Ban Khlong Muang
The Tiger Cave Temple is one of the famous attractions. The ancient cave temple is never empty. There are lots of visitors even on the days when no Buddhist holidays are held here. The temple was founded in a small cave, but now it is a large complex with a monastery, meditation centre, and a few other buildings. Architecturally, the temple is of great interest. Many ... Open »
Phuket
The National Museum Talang is the best way to continue the learning of local folks traditions and customs. Its showcases present household items used by local folks a great collection of weapon and archeological finds and treasures. A big part of the exhibition is devoted to the Burmese war. The monument “Two heroines” locted opposite to the museum commemorates this ... Open »

Culture guide to Langkawi. Which fascinating sights to visit once you are in Langkawi: temples, churches, museums, theaters and castles. Recommendations (with addresses, phone numbers and links) on the places 'must visit' in Langkawi. Plan your own city excursion by using this page info!