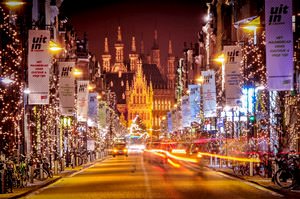 Residents of Leuven may seem quite restrained and cold to foreign guests. Such behavior shouldn’t be regarded as a sign of hostility towards foreigners – the thing is that people living here have a very peculiar character. They live a closed life and receive guests rarely. It is not customary to communicate with strangers on the streets and in other public places. Nevertheless, the city is characterized by a very lively atmosphere, since a significant part of its inhabitants are young people - students of local colleges. Such character traits do not prevent Leuven residents from holding beautiful annual holidays and festivals, during which the city is enveloped in an atmosphere of joy and triumph.
Shopping in Leuven - main shopping streets, outlets and boutiques
In Leuven, shopping fans will have a chance to explore not only interesting stores but also colorful markets. Near the Cathedral on Smoldersplein Street, you'll find a wonderful flea market …

Open
It would be especially interesting to visit the city on Christmas Eve when its streets are transformed beyond recognition. Townspeople decorate their homes with beautiful garlands, and on some houses, one can see decorations made of traditional Belgian lace. They started to organize public theatrical performances on Christmas Eve back in the 16th century, and this beautiful tradition is still relevant today. Artists wearing beautiful historical costumes arrange interesting performances, which are often participated by ordinary local people.
Traditional fairs are always held in the city in December. Here you can buy fragrant waffles, chocolate sweets, mulled wine and other holiday treats. The traditions of local holidays have a lot of interesting features. Here they consider their pets to be full-fledged members of the family, therefore, it is also customary to prepare holiday gifts for them. Even a little hamster will not be left without a Christmas gift. Copyright www.orangesmile.com
Guide to Leuven sightseeing - things to see and to visit
Leuven is a city in Belgium located in the province Brabant. Leuven is a port town that stands on the Dyle River and on a channel that connects Leuven with Scheldt. The population of the …

Open
Such a great love for noisy celebrations is surprisingly combined with the townspeople's secluded lifestyle. It is very rare to invite guests to home, while meetings with friends and relatives in a cafe are still more preferable. Another interesting feature of their character is that it is customary to greet each other at every single meeting. Even if you've seen your friend less than half an hour ago, you should say hello one more time if you meet each other once again. This is the way locals show their indifferent attitude to their friends and relatives. 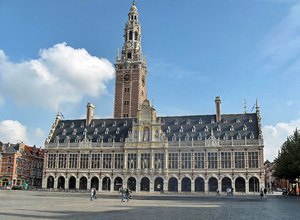 People in Leuven are very polite, it is extremely rare to hear raised voices or see any other display of strong emotions. It is not customary for locals to discuss personal topics related to finances, health or personal life, but they always willingly talk about traveling and issues related to the home.
Family holidays with kids in Leuven. How to entertain your child, things to show to children.
Leuven is famous for its historical monuments and picturesque parks. Special entertainment can be found here for tourists with children. There is an excellent amusement park in the city …

Open
Due to its unique culture, picturesque Leuven has many unofficial nicknames. It is often called the "Beer Capital of Flanders". Its brewing traditions go back over 400 years. Leuven hosts the grand beer festival Zythos every year. Usually, it is held in late April, when representatives of the best European brewing companies take part in the large-scale festival. One of the main venues for the festival is the Brabanthal exhibition complex with specially equipped tasting rooms and interesting thematic programs. 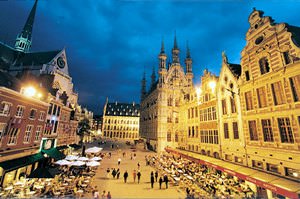 During the festival, its guests can taste more than 500 types of beer, including premium Belgian beers. Beer tasting is always accompanied by a tasting of the best Belgian delicacies. Participants are invited to try excellent cheese from local farms and deli meats, and some beers are perfectly complemented by... chocolate. The Zythos Beer Festival has become so popular that at least 100,000 tourists visit it every year.
Cuisine of Leuven for gourmet with top restaurants and cafe
Traditional treats of Leuven are considered pastries, cheese, wine and local beer. These goodies make the national cuisine special and unique. The honorable place of local cuisine is …

Open
A variety of interesting activities are organized especially for them, including guided tours of local historic breweries. Some of them have been operating for hundreds of years, producing their beer according to unchanged recipes. Beer tours are available to guests of the city even outside the framework of the festival - legendary Leuven factories can be visited at any time of the year. For example, Stella Artois brewery is based in Leuven. Beer of this brand is now well known to residents of many countries of the world. A few years ago, the large factory began to conduct tours for tourists. Now they can watch all stages of the popular beer's production. 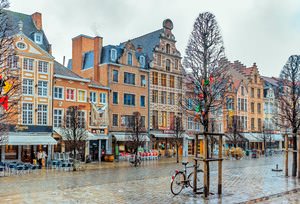 Travelers wishing to get acquainted with the traditions and lifestyle of local people would probably be interested in visiting Leuven during major holidays. Very interesting celebrations take place on city streets on Easter Day, while winter season boasts the highest concentrations of festivities. The time for winter carnivals and fairs here begins long before the New Year and Christmas holidays. In the early days of December, the city begins transforming to offer its guests special types of winter entertainment.

This guide to traditions and festivals in Leuven is protected by the copyright law. You can re-publish this content with mandatory attribution: direct and active hyperlink to www.orangesmile.com.
Leuven - guide chapters 1 2 3 4 5 6 7 8

♥   Primatiale Sint-Romboutskathedraal, Mechelen / Malines, 22.8 km from the center. On the map

♥   Sint-Servaasbasiliek, Grimbergen, 23.9 km from the center. On the map

♥   Collegiale Sint-Michiels- en Sint-Goedele-co-kathedraal, Bruxelles / Brussel, 24.1 km from the center. On the map

Colors of Leuven in photos

Traditions and festivals in cities around Leuven

Mechelen
Many brewing traditions have been preserved since then. Today, they use cinnamon, orange peels, chamomile inflorescences, coriander, and other spices to brew special varieties of the drink. Now the brewery holds regular tours, it has a large tasting room and a popular restaurant with regional cuisine on the ground floor. Not so long ago, in addition to beer, the production of ... Open »
Brussels
Brussels natives are very sociable and friendly, you can easily discuss any topic with them. Nevertheless, it is necessary to avoid talking about the government, the royal family and inter-ethnic relations. As in any other country, there are some taboos here. The local population is very intolerant to French culture, so you should never compare the natives with the residents ... Open »
Antwerpen
Many centuries ago local residents were famous as refined gourmets. They have remained very skillful in food until our days. The reason for this is in the fact that this large port city has always had a large choice of different types of food. Ships coming from distant lands brought delicious seafood, rare wines and liqueurs here, as well as unusual spices and seasonings – a ... Open »
Namur
Gastronomic traditions are another interesting part of the regional culture. Recipes for the preparation of some dishes have remained unchanged for hundreds of years. Even now, in the age of modern gastronomy, local residents prefer simple and familiar "peasant" food, even though gourmet restaurants are widespread in the city. It is definitely worth noting the local people's ... Open »
Liege
The main city festive events always take place in Outremeuse district of the city. As a rule on a festive day its territory gathers not less than 300 thousands of visitors. Fairs are also rather interesting and engaging events. The most lasting one starts on the first weekend of October and lasts for six weeks. Plenty of goods and festive treats, exciting entertainments for ... Open »
Maastricht
March is the time for conducting the world-famous exhibition of antiques. This event attracts collectors from all over the world. This is a very prestigious and important exhibition, so every European city would consider an honor to host such a massive celebration. Another distinguishing feature of the city is an abundance of marijuana. This fact is easily explained by the ... Open »

Cityguide on traditions, mentality and lifestyle of people in Leuven. Learn the best periods to visit Leuven to discover its soul - authentic festivals, events and celebrations. We will also reveal the interesting habits, attitude towards the world and to tourists in Leuven.