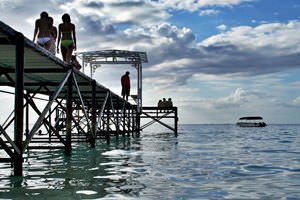 The main treasures of tiny Le Morne are its picturesque beaches and interesting natural attractions. To find historical and cultural sites, fans of excursions should head to the neighboring towns. They are very close to the resort so this kind of tours is always popular with tourists. In the vicinity of Le Morne is the original Maison Eureka Museum that occupies a beautiful colonial building. This building formerly housed a large sugar cane processing factory. Several years ago it was reconstructed and converted into a museum.
Advices to travellers: what you should know while being in Le Morne
1. Le Morne can be reached by bus from literally any city in Mauritius. From the nearest town of Port-Louis, many tourists prefer to take a taxi, this option would be beneficial for large …

Open
The historic building itself is remarkable for its unusual architecture with more than a hundred doors. The wood-carved elements are perfectly preserved in the interior, the atmosphere of past centuries was restored in the mansion as accurately as possible. Here you can see collections of luxurious antique furniture, unique works of art and personal belongings of planters who once lived in these places. The colonial estate stands in a large garden, and several active plantations have been preserved next to it. Tourists are invited to ride a horse-drawn open carriage and admire the surrounding landscapes.
From Le Morne, one can easily get to the picturesque town of Rose-Hill, the entire territory of which is considered a unique historical site. A lot of well-preserved colonial buildings are still actively used by townspeople here. They are presently occupied by schools, colleges, government offices, and hotels. It is very convenient to explore the small town on foot, as interesting historical sites are located at every step. Here you can find an excellent theater where local artists and student groups perform, as well as several art galleries. Copyright www.orangesmile.com
Extraordinary weekend in Le Morne - unusual places, services and attractions for travel gourmet
…

Open
In the vicinity of the resort, it was possible to preserve several ancient fortifications, which were used to protect the coast from invaders in the past. The most interesting one is Château Robillard that was built by the first colonizers. Over the long history of its existence, the fortress has managed to avoid destruction so today it looks truly impressive. A historical museum, one of the largest on the island, was opened within the walls of the picturesque castle. 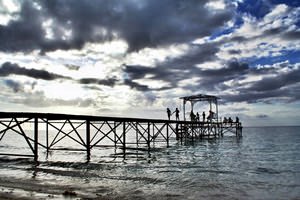 In addition to typical antiques and a rich collection of paintings, it presents a collection of old maps, as well as models of ships on which colonists arrived on the island. One of the most interesting is the collection of ancient weapons, some of which once belonged to pirates. A significant part of the exposition is devoted to the culture and life of the indigenous population.
Guide to Le Morne sightseeing - things to see and to visit
Le Morne is a peninsula in the south-western part of the Mauritius Island. The island is located on the south-west of Indian Ocean. This is a true paradise in tropics; the temperature here …

Open
Not far from the castle is one of the region's most interesting religious attractions - the ancient church Notre-Dame des Anges. This Catholic church is remarkable for being one of the very first on the island. Since its construction, it has never undergone any major reconstruction, therefore today it is exactly the same as during the colonial development of Mauritius. Many valuable religious attributes, sculptures of saints, and ancient icons are hidden within the walls of the church. 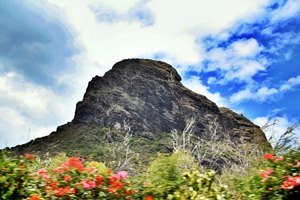 One of the few historical sites that managed to survive in Le Morne is the old Martello Tower. Once it was part of large-scale fortifications that were built along the entire coast. All of them have collapsed over hundreds of years, and only the strong tower remained safe and sound. Now it has a small museum dedicated to the history of the city and a beautiful observation deck at its top. In the tower's museum, one can see old military guns that were used to protect coastal areas. One of the oldest cannons is still installed on the roof of the tower.
Family holidays with kids in Le Morne. How to entertain your child, things to show to children.
The Mauritian "Little Paradise" of Le Morne is a great place to spend your vacation. Here you can either bask in the scorching sun of Mauritius feeling incomparable bliss, or enjoy active …

Open
Another category of popular tourist attractions is old lighthouses. The beautiful Albion Lighthouse has been preserved near Le Morne. It has been one of the highest on the island since its construction. Until a few decades ago, it had served its intended purpose for more than a hundred years. When it lost its former relevance, the lighthouse was preserved to become one of the main historical symbols of the resort. Tourists are allowed to climb to the top of the lighthouse and admire a wonderful view of the coast from its observation deck. Near the lighthouse is a popular tourist area adorned with landscaped gardens and fountains.

In the section below, you can get one of our excursion, activities or city discovery tours over Le Morne and surroundings. Our website offers 10-30% lower ticket prices, when compared to the offline purchase on the spot.

City tours, excursions and tickets in Le Morne and surroundings

This guide to cultural sights Le Morne is protected by the copyright law. You can re-publish this content with mandatory attribution: direct and active hyperlink to www.orangesmile.com.
Le Morne - guide chapters 1 2 3 4 5 6 7 8
Car rental on OrangeSmile.com

Excursions over cultural sights of neighbours of Le Morne

Balaclava
Balaclava Ruins or Balaclava Fort dates back to the 18th century. When the French proclaimed Port Louis the new capital, they needed many materials to build it. Balaclava region was rich in iron, so the area supplied the French with materials to make weapons and gunpowder. A gunpowder factory, a naval arsenal, and an iron foundry formed the fort. Ruins of this fort were later ... Open »
Belle Mare
The visiting of caves, the natural attractions of Mauritius, can be a really exciting experience. Close to Belle Mare, you will discover the cave with the interesting name “Madame”. Here is everything you may need for good relaxation: a place for camping, an opportunity to explore the cave or to enjoy a meal in the restaurant which is located nearby. Talking about ... Open »
Grand Baie
An equally interesting landmark is Venizelos graves. The historic area is located on a high hill near the international airport. During the walk, visitors can see not only priceless historical sites but also enjoy spectacular panoramic views of the surrounding area. An important archaeological sight is Aptera Reserve, a miniature old town founded back in the Minoan era. Here ... Open »
Grand Gaube
Be sure to visit the island's capital - the city of Port Louis where you can find a lot of interesting architectural attractions and cultural institutions. Just outside the city is the world-famous Pamplemousses botanical garden. Its main treasure is a rich collection of giant water lilies, and part of the garden is devoted to culinary herbs. As is known, local spices are ... Open »
Antananarivo
The former home of Prime Minister Rainilaiarivony is another important landmark of the capital. It’s a magnificent pink colored palace in the baroque style that currently hosts the exhibition of a museum. The collection includes many items that once belonged to Merina kings and queens, and tells more about Rainilaiarivony himself and the three queens he married. It’s a ... Open »
Mahe Island
If you’re fond of art, then you should go to Michael Adams Paintings Studio, the art gallery of the quite famous local artist. You can see his paintings, have a nice conversation with the artist or his wife and even buy a memento (prices are pretty ok) there. In case you’re keen on religious architecture, a Hindu temple in the capital’s city centre is a must-see. ... Open »

Culture guide to Le Morne. Which fascinating sights to visit once you are in Le Morne: temples, churches, museums, theaters and castles. Recommendations (with addresses, phone numbers and links) on the places 'must visit' in Le Morne. Plan your own city excursion by using this page info!