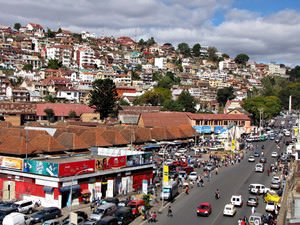 During a walk in Antananarivo, tourists can see many magnificent mansions and palaces. In the capital, there are still many landmarks of the colonial period. Without a doubt, Rova Ambohimanga palaces are one of the most prominent architectural landmarks of the region. The first palace of the area, Manjakamiadana, was built yet at the beginning of the 17th century. A century later, no less amazing palaces appeared nearby – Manampisoa, Andafiavaratra, and Tranavaluna. Besides fantastic palaces, during an excursion tourists will see tombs of kings who ruled the island in the 18th and 19th centuries. One of the palaces has been converted into a museum of history, which exhibition will help visitors to find out more about all important events in the life of the city and Madagascar in general.
Best hotel choice for romantic escape, wedding or honeymoon in Antananarivo
The most romantic and charming hotel of Antananarivo is Baboo Village offering accommodation in fabulously charming wooden bungalows. All lovely cottages are located a few steps from a …

Open
Picturesque Independence Street is the best place for a stroll. There are many shops, restaurants, and cafes that are targeted at tourists. The biggest market on the island, Zuma, is located not far away. The variety of items for sale is so big that it is hard to choose what to purchase. Tourists will hardly find a better place to buy memorable gifts and souvenirs. If the primary aim is to purchase items by local craftsmen, consider visiting Andruvuhangi (Andhra Nuahangi).
These are not all architectural landmarks located not far from the trading district of Antananarivo. Such magnificent places as the Izutri Theater and the building of the National Library are, without a doubt, worth a visit. Fans of leisure walk and stroll in picturesque places will be very excited to attend Tsimbazaza Zoo and see its main inhabitants – cute lemurs. Besides the friendly and curious animals with long striped tails, guests of Tsimbazaza Zoo will see scary crocodiles, unhasting turtles, and many colorful birds. The zoo is also the location of the Academic Museum with skeletons of prehistoric animals being its main exhibits. Copyright www.orangesmile.com
Shopping in Antananarivo - main shopping streets, outlets and boutiques
Many tourists begin shopping in Antananarivo with a walk along Independence Avenue. This busy street is actually a huge bazaar, on both sides of which are shopping tents with a great amount …

Open
Antananarivo suburbs are also not deprived of interesting landmarks. For example, Ambohimanga Hill is one of such prominent places. This is the location of an ancient fortress and a palace that was a king’s residence in the past. Both the buildings were constructed yet in the 18th century. According to scientists, the hill was used for important religious ceremonies in the past, so many pilgrims still visit it. Nature fans simply cannot leave the island without a visit to Perinet Nature Reserve, which has become home to rare species of lemurs. However, frogs have become the main inhabitants of the reserve – there are more than eight hundred species of them. Besides that, the nature reserve is famous for its magnificent orchids that attract not only fans of eco-tourism but also all curious tourists. 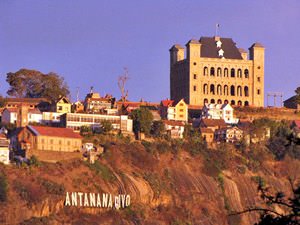 The former home of Prime Minister Rainilaiarivony is another important landmark of the capital. It’s a magnificent pink colored palace in the baroque style that currently hosts the exhibition of a museum. The collection includes many items that once belonged to Merina kings and queens, and tells more about Rainilaiarivony himself and the three queens he married. It’s a great place for everyone who wants to learn more about that period in the country’s life. Unfortunately, the Merina crown jewels were stolen several years ago and until now they haven’t been recovered, but there are still many interesting and precious items to see.
Guide to Antananarivo sightseeing - things to see and to visit
The most colorful and attractive city of Madagascar, Antananarivu is located on two picturesque hills. Here you will find multiple cozy parks and terraces, fairytale-like castles and museums … 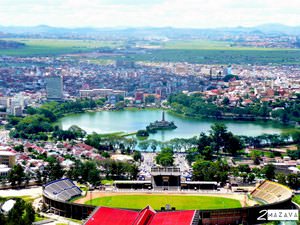 The museums of the capital of Madagascar are of a special interest. Among them, it is important to mention the Musee de la Photographie de Madagascar. This museum is interesting in terms of the beautiful exhibits that are displayed in it, as well as for the reason that the building is of a great architectural value. The museum is located on the top of a hill. Inside the museum, you can learn about the history of the city by merely looking at old photos. You should also take a walk to the Pirate Museum. Here you can get to know the history of this phenomenon, which was once prevalent in Madagascar, not only in the Caribbean Sea. The museum is located on the fourth floor of a building, so you should be vigilant not to miss such an interesting establishment.
Family holidays with kids in Antananarivo. How to entertain your child, things to show to children.
The main attraction of the capital of Madagascar is the Tsimbazaza zoo - a great place for a family holiday. Among the inhabitants of this beautiful zoo, lemurs are typical representatives …

Open
A gorgeous example of the colonial style in architecture is Le Palais de la Reine. It was built in the first half of the 19th century in honor of Ranavaluna, the first Queen of Madagascar. A little later, it was tiled with stone. However in 1995, it was burned down and has still not been restored since then. On its territory, you can find the crypts of the Madagascar Kings. In addition, after climbing the tower, you can see incredibly beautiful views. There is a beautiful panoramic view of the embankment in the form of a heart, and the stadium since it is the tallest building in the city (1,500 meters above the sea level). 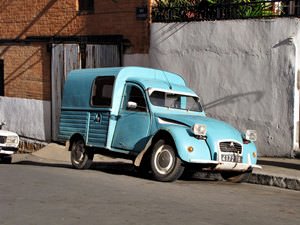 Many tourists get acquainted with the city as soon as they step out of the railway station, and it should be stated that this building itself is a piece of architectural art. You will immediately be impressed by the elegance of the building. It is clear that the architects who worked on the project did not work in vain. After such sights, you get a deep desire to explore the city. Nevertheless, you should continue the acquaintance with the city from the house-museum of a person who made great contributions to the development of the country. We are referring to Jean Laborde, who as a matter of fact, played an important role in Madagascar’s history since he was the one that organized the first industrial production here. It is for this reason that you should not fail to visit the house where he lived and worked, in order for you to get better acquainted with the local culture.
Cuisine of Antananarivo for gourmet with top restaurants and cafe
The national cuisine of Antananarivo is an original combination of African and Malay culinary traditions. Rice remains the main ingredient of the majority of traditional dishes. It is often …

Open
There are some interesting religious monuments too in the capital of Madagascar. Cathedrale Catholique d Andohalo is one of them and it stands out from the others with its wonderful atmosphere, exquisite stained glass windows and spaciousness. Eglise de Faravohitra impresses visitors with its great aura of antiquity. The interior of the building is as beautiful as the exterior. The city also has beautiful parks, one of which is Parc Soavinandriamanitra, where you can see the local natural attraction – the Lemurs.

This guide to cultural sights Antananarivo is protected by the copyright law. You can re-publish this content with mandatory attribution: direct and active hyperlink to www.orangesmile.com.
Antananarivo - guide chapters 1 2 3 4 5 6 7 8 9 10 11 12

Are you fond of museum exhibitions? In this case, don’t forget to visit museums that are open in the island’s capital. There are interesting archaeological and paleontological exhibitions, and art gallery, and the Museum of Photography of Madagascar. In Moramanga, there is quite an unusual museum - Musee de la Gendarmerie Nationale. The venue is dedicated to important events in social and everyday lives of Malagasy people. For example, there are tools that were used to make rum illegally. … Open

Photogallery of cultural heritage of Antananarivo

Excursions over cultural sights of neighbours of Antananarivo

Le Morne
The historic building itself is remarkable for its unusual architecture with more than a hundred doors. The wood-carved elements are perfectly preserved in the interior, the atmosphere of past centuries was restored in the mansion as accurately as possible. Here you can see collections of luxurious antique furniture, unique works of art and personal belongings of planters who ... Open »
Balaclava
All tourists who enjoy a vacation in Balaclava simply cannot fail to visit Turtle Bay. This magnificent piece of nature also has rich cultural heritage. These days, it’s a popular stop for ships that make cruises from Europe to the East. Turtle Bay has long history. On old Dutch maps, it was known under the name “Ebony Bay” because of lush ebony forests. As ebony is ... Open »
Grand Baie
In addition to magnificent beaches, Grand Baie boasts an abundance of unique attractions, which would be of interest to any traveler. An interesting cultural institution is the Museum of Kissamos keeping a collection of interesting archaeological artifacts. The museum is presently housed in a beautiful historic building demonstrating an original combination of different ... Open »
Grand Gaube
Not far from the resort is the old sugar factory L’Aventure du Sucre presently occupied by a museum. The museum exposition is devoted to the history of the island and describes the most important events of the colonial period. Near the museum, there are several attractive souvenir shops offering a wide range of handmade crafts and jewelry. Be sure to explore Turtle Cove ... Open »
Belle Mare
Among religious sights, it is necessary to highlight the Kali Mandir temple. Regardless of its small size it deserves to be visited. The reason being, that there is a special spiritual feeling which overwhelms you when you get inside. There is another Hindu temple which is distinguished by its simplicity. Of course it is unusual to see such sights in this way, but in ... Open »
Zanzibar Island
You should not miss having an excursion around little islands around Zanzibar. First of all, Mafia Island. The island is famous not only for its spice plantations but also for collar reefs. It’s the best point for diving and to swim around whale sharks. A tour to Mafia Island usually also includes a trip to the local village on Chole Island and to Juani Island’s ruins. ... Open »

Culture guide to Antananarivo. Which fascinating sights to visit once you are in Antananarivo: temples, churches, museums, theaters and castles. Recommendations (with addresses, phone numbers and links) on the places 'must visit' in Antananarivo. Plan your own city excursion by using this page info!