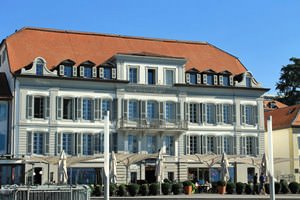 The cultural life of Lausanne impresses with a variety of interesting and diverse events. Different bright festivals, fairs and expositions, culinary and sporting events are held within the year. The most interesting and popular event among tourists is still the city festival «Festival de la Cite» established more than fifty years ago. It is notably that initially the fest was dedicated to beer. During the festival the best brewing companies presented their products and the city folk enjoyed the favorite drink and festive treats.
Extraordinary weekend in Lausanne - unusual places, services and attractions for travel gourmet
…

Open
Since the 70s of the last century the festival was revised and year by year its program has included ever new events. During the fest the visitors can attend the concerts of classic music and the performances of rock bands, circus shows and theatrical performances, engaging sport events and stage plays for kids. The festival schedule is rather rich and diverse offering the events meeting each fancy.
The main feature of the city festival is the absence entrance tickets for entertaining events as all of them are absolutely free. The major part of the concerts and performances is held in the old town part where the stages and platforms for artists are mounted. To help the guests of the festival to find a necessary performance or event, a special program is issued. The program leaflet contains the detailed schedule of the events added with descriptions and the starting time of every performance. The festival is annually visited by more than one hundred thousands of international travelers. The city festival starts in the middle of June and commonly lasts till August. Copyright www.orangesmile.com
Shopping in Lausanne - main shopping streets, outlets and boutiques
The liveliest shopping area in Lausanne is Flon that covers an area of about 55,000 square meters. More than 70 clothing and shoe stores, as well as a variety of designer boutiques, jewelry …

Open
Apart from culture and arts the local people are attracted to sports. Lausanne hosts annually the athletics meeting “Atheltissima”. This is an international event which attracts many sport fans. The marathon commonly takes place as a part of this event. The length of the path is 42km and it runs through scenic territory among vineyards across the coastline of Lake of Geneva. Many engaging competitions are held in the city. Anybody can compete in the competitions to try the strength and skills together with professional athletes. 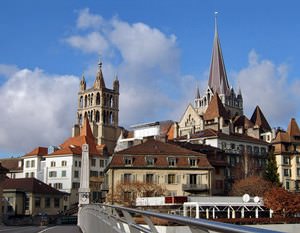 Other festivals in Lausanne are no less colorful and attractive to tourists. One of these is the Chocolate Festival, which, despite its name, is dedicated not to sweets but electronic music. Everyone can join the event in early June when large-scale parties are held on the shore of the picturesque Lake Geneva. Along with music fans, the festival also attracts nature enthusiasts, as this is a great opportunity to have a picnic and set up camp. Another interesting open-air summer event is the Festival de la Terre, which follows the above-mentioned Chocolate Festival. At this time, Esplanade de Montbenon becomes the venue for music concerts. Here you can also take part in workshops and play sports. The festival stands out with its warm friendly atmosphere, being one of the best events in the city's life to attend with children.
Guide to Lausanne sightseeing - things to see and to visit
Even though Lausanne is a small place, this is the most visited city of Switzerland that is traditionally popular among tourists. Lausanne is located at the foot of the Aiguille du Midi …

Open
Music lovers would be happy to check out another nice music festival that is held in early April. We are talking about the Cully Jazz Festival aimed at introducing visitors to music that has already become classics, as well as its related genres such as funk, blues, soul, rock. The 9-day event takes place in cultural centers, concert halls, theaters, opera houses, bars, and cafes in Cully near Lausanne. In total, about one hundred and forty concerts are held within the festival framework. Among the headliners, one can see many big names of jazz and blues musicians. For fans of electronic music, it's worth mentioning the fest called Les Digitales de Lausanne, which takes place at the beginning of the first autumn month in the picturesque park Le Denantou. 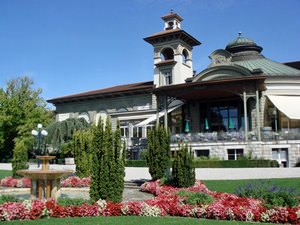 For many tourists and locals, the Balelec is a favorite festival in Lausanne. It starts in early May and is famous for its cheerful atmosphere, which can be seen from the number of people visiting the city at that time. So, about fifteen thousand people take part in the festival every year. This is despite frequent rains in early May - such bad weather is by no means an obstacle for those wishing to get unforgettable impressions from visiting the festival. However, in case of rain, you can always hide under the roof because concerts are held not only in the open air but also indoors - in one of the nightclubs and the École Polytechnique Fédérale de Lausanne.
Family holidays with kids in Lausanne. How to entertain your child, things to show to children.
There are many interesting sights in Lausanne that tourists with children will surely like. They should definitely look into the Vivarium Lausanne. This center contains an incredible …

Open
Ballet fans will be happy to visit Lausanne at the end of January during the Prix de Lausanne. The dancing competition is broadcast on almost all Swiss channels. Performances of ballet troupes take place at Lausanne's most famous theater - The Fondation Béjart Ballet. In mid-October, Lausanne welcomes film buffs and underground music fans - the reason is the spectacular Lausanne Underground Film & Music Festival (or simply LUFF). This is one of the most grandiose events not only in Switzerland but throughout Europe. 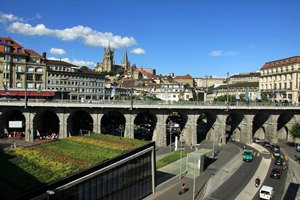 Those looking for the incredible aesthetic enjoyment would be happy to visit Lausanne in November and December when the city is preparing for Christmas and New Year in a very impressive way. The thing is that locals cannot do something bad - given their natural perfectionism, preparations for the large-scale holiday are no less amusing than the celebration itself. Central streets of the city are beautifully illuminated, creating magical patterns of light. The sight appearing before tourists captivates them just like the fakir sound charms cobra. It is customary to celebrate Christmas with the family, and as for the gastronomic component, the main dish in Lausanne is fried pork or chicken tenderloins.

This guide to traditions and festivals in Lausanne is protected by the copyright law. You can re-publish this content with mandatory attribution: direct and active hyperlink to www.orangesmile.com.
Lausanne - guide chapters 1 2 3 4 5 6 7 8 9

Cathedrals and basilicas near Lausanne
♥   Ancienne cathédrale protestante Notre-Dame, Lausanne, 0.4 km from the center. On the map

♥   Basilique Saint-François-de-Sales, Thonon-les-Bains, 20.1 km from the center. On the map

♥   Cathédrale Saint-Pierre de Genève, Genève, 51.3 km from the center. On the map

♥   Cathédrale Saint-Nicolas, Fribourg, 51.6 km from the center. On the map

Survived castles around Lausanne
♥   Castle 'St-Maire Castle' , 0.6 km from the center. On the map 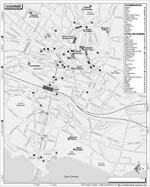 Colors of Lausanne in photos

Traditions and festivals in cities around Lausanne

Montreux
In spring, a traditional flower festival is held in Montreux. It begins in early April and lasts until the beginning of summer. In the suburbs, there are spacious tulip meadows that are the symbol of the region. In late spring, Montreux is literally buried in colors and fragrances of spring flowers. The most interesting festival events take place in mid-May. At this time, ... Open »
Geneva
In local schools children learn all of these languages, but, as a rule, they can usually speak well only one of them. Local people are very religious, according to statistics, less than 5% of citizens do not adhere to any religion. The remaining 95% regularly attend religious shrines and have great respect towards religious holidays and customs. Residents of Geneva are very ... Open »
Neuchatel
Fans of modern music would probably be interested in visiting the city in June when it hosts the Festi’neuch - Neuchâtel openair festival. It is held in the vicinity of the city at open-air concert venues. The Contemporary Music Festival was first organized in 2001, and now the number of its regular participants exceeds 40,000 people. The event takes place in an incredibly ... Open »
Crans-Montana
In Crans-Montana, it is customary to celebrate Christmas on December 25th. The most interesting holiday event for locals and tourists is the Christmas markets. Usually, here one can buy the best delicacies brought from different parts of the country, as well as buy the best regional wines and interesting souvenirs. All the markets are necessarily accompanied by street ... Open »
Chamonix
It’s worth noting that all festival events are absolutely free. The only thing to take care is about having ski passes to be able to visit all interesting concerts. Professional photographers know Chamonix primarily as the birthplace of photocross. It is an unusual sport, which involves a high-speed orienteering and shooting spectacular images; the international championship ... Open »
Bern
The day of the city's founding is the time for mass festivities in Bern. As a rule, the celebration is accompanied by numerous performances, fairs and children's holidays. You will find numerous small stalls and coffee shops next to all main streets and squares of the city. These are the places where guests can warm up and drink delicious local beer. August 1 is the time for a ... Open »

Cityguide on traditions, mentality and lifestyle of people in Lausanne. Learn the best periods to visit Lausanne to discover its soul - authentic festivals, events and celebrations. We will also reveal the interesting habits, attitude towards the world and to tourists in Lausanne.