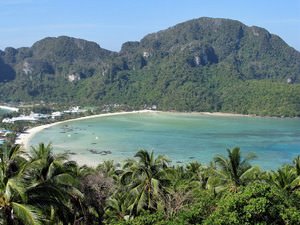 Locals feature a friendly and welcoming attitude to people of another culture; foreigners are treated with interest and respect. Residents of Krabi are very laid back and relaxed people; violent emotions and loud tone of voice are considered signs of mauvais tone. Be sure to communicate with locals in calm voice; they don’t tolerate any haste during a conversation, so don’t force and proceed to discussing serious issues from the very first minutes of communication.
Guide to Krabi sightseeing - things to see and to visit
Krabi is one of the most beautiful provinces of the Southern Thailand, which is located near the border with Malasia on the coast of Indian Ocean. This is the youngest tourist destination of …

Open
The local culture prohibits any contact during conversations, even the customary handshake is not accepted. In order to greet the person, just put your hands on the chest and lean forward a bit; this form of greeting is appropriate for both men and women. If you had accidentally touched passer in public place or institution, be sure to stop and apologize. Going to visit a new friend, it is worth considering a few simple rules. When entering a private home, be sure to take off your shoes; you can just leave it at the door. During the conversation, in any case, don’t cross your hands or feet, such a posture will be regarded as disrespect and unwillingness to communicate. It is usual to pay visits with gifts; modest souvenirs for hosts would be a great solution.
The cultural life of Krabi is full of interesting holidays and festivals. One of the most interesting national celebrations is Loy Krathong festival, the All Souls' Day. They celebrate it according to the lunar calendar, so every year the date of the holiday changes. Despite the fact that the event is quite serious, it is accompanied by a number of interesting rituals, which attract lots of observing tourists. Copyright www.orangesmile.com
Family holidays with kids in Krabi. How to entertain your child, things to show to children.
Family holidays on the Krabi Island should not be limited to beach activities alone. You should definitely visit the entertainment center, Poppy’s Minigolf & Kebab Café with children. …

Open
On the eve of the festival all the locals make small boats of banana leaves. Later, they set burning candles upon and lower boats on water. In the evening, all the beaches of Krabi are illuminated with thousands of lights. In November, the island hosts the Festival of the Andaman Sea. The beginning of this colorful festival coincides with the start of the tourist season. Exciting competitions in beach sports, concerts and entertainment for children, an incredible culinary contests and an abundance of colorful fairs are main attributes of that popular holiday. Krabi is the perfect place for those who want to learn more about Thai culture and enjoy beautiful holiday rituals. 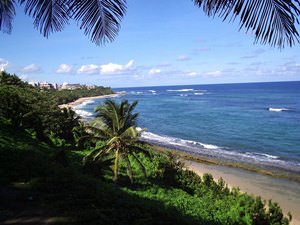 This is also a great destination for those looking forward to the New Year. The matter is that in Krabi, the holiday is celebrated not once but as many as three times a year. Firstly, the European New Year is traditionally celebrated on December 31. Secondly, the Chinese New Year is widely popular (due to the large influx of tourists from China), it falls either in January or February. And thirdly, the Thai New Year takes up the baton in April. The European New Year is accompanied by fireworks and street parties with the participation of European tourists. Before the Chinese New Year, locals clean their houses, then morning processions start, followed by festive fireworks in the evening.
Cuisine of Krabi for gourmet with top restaurants and cafe
Local cuisine has an abundance of original dishes. Those who prefer hot and spicy food would enjoy a vacation in restaurants of Krabi. The abundance of spices and herbs is one of the main …

Open
But the most colorful holiday is the Thai New Year known as Songkran. Celebrations traditionally begin on April 13, ending on April 15. Bright parades are held in the morning, temples are important spots at this time, all the actions take place around them. Local people carry statues of Buddha on the cars. At this time, one needs to be careful to avoid wetting documents or phones: The thing is that, according to tradition, locals pour water from buckets and shoot everyone they meet on their way from water guns - and among them are not only passersby but also Buddha statues. So if you want wonderful memories, it is still better to leave papers and electronic devices in the hotel and go for the most pleasant impressions - be sure there will be a lot of them. 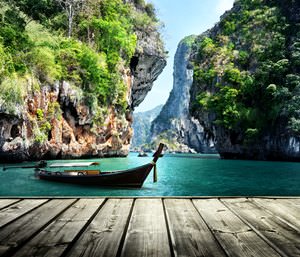 On December 5, Krabi traditionally celebrates the birthday of the most revered person in Thailand - namely, Bhumibol Adulyadej, the ninth king from the Chakri dynasty. The festival is called “Father's Day”, during its celebration portraits of His Majesty are hung on all the streets of Krabi, the streets are also decorated with yellow flags (traditionally the yellow color is the King’s color), locals also try to wear yellow. In Krabi, the holiday is as bright as in the Thai capital, with fireworks, parades and public festivities. On this day, it is also customary to congratulate fathers. Another holiday associated with the royal family is celebrated on August 12, when Queen Sirikit was born. This celebration is traditionally called "Mother's Day" when mothers are congratulated accordingly.
Excursion over cultural sights of Krabi - 'must visit' points of interest
Besides beautiful beaches and clear sea, Krabi has to offer its guests a lot of interesting places to walk. You should definitely include in the excursion a visit to natural attractions, …

Open
Krabi also celebrates a few holidays related to Buddha. First and foremost, this is Visakha Bucha, the birthday of the spiritual teacher, the celebration falls on May or June (the eighth day of the fourth month of the lunar calendar). Bright parades are held in the city, nobody can become sad - even if one wants. Another festival is traditionally celebrated in February and is called Magha Puja, and is dedicated to how the founder of Buddhism taught his followers. Believers celebrate in temples that become crowded at this time. In August, Sat Duan Sip, the Ancestors' Day, is celebrated - the only day of the year when departed relatives can get into our world. Locals collect gifts for them and carry them to shrines.

This guide to traditions and festivals in Krabi is protected by the copyright law. You can re-publish this content with mandatory attribution: direct and active hyperlink to www.orangesmile.com.
Krabi - guide chapters 1 2 3 4 5 6 7 8 9

City tours, excursions and tickets in Krabi and surroundings

Colors of Krabi in photos

Traditions and festivals in cities around Krabi

Ko Lanta Island
It might be a surprise to find out that people on Ko Lanta Island actually have high moral principles, even though Thailand is famous for its parties and positive attitude to transsexuals. There are no nude beaches on the island, so if you’ll try to sunbathe naked or topless, then stricken people will call the police and you’ll be fined. The locals are known for their ... Open »
Ko Lanta
You will constantly notice that everyone around you is smiling while walking around the Old Town. This often seems deliberate and inappropriate. However, such traditions are in Thailand. It is believed that everyone gets a smile in return by sharing his smile with everyone around him. Luck, energy, and good mood come along with smiles. Therefore, even if the Thai is not doing ... Open »
Ko Samui
One of the main features of the island of Kho Samui is a unique lifestyle. Level and easy lifestyle with plenty of peculiar features will seem weird to foreign guests. The life of local folks will amaze tourists from the first day of their visit to the island. One of the brightest features of ethnic character is a scrupulous attitude of local people towards their personal care ... Open »
Langkawi
Exploration of traditions and culture of local people can turn into a fascinating process. They observe a lot of interesting old customs; they have their own character and colorful celebrations, which are conducted the same way as they were centuries ago. The hibiscus flower is considered the local symbol. Most of the indigenous people are adherents of Muslimism, for them five ... Open »
Ko Pha Ngan Island
Going to Ko Pha Ngan, you shouldn’t forget that locals are not Europeans and they have many special traditions and customs. Some of them are quite different from the usual traditions in Western culture. In general, locals in resort areas are accustomed to the "strange" behaviour of tourists, which are often called «farang». But there is no special tolerance for ... Open »
Ko Tao Island
When you are going to Ko Tao, pay attention to some peculiarities of Thai mentality and laws. The most important thing is on any circumstances not to offend the royal family. That, if you don’t have any desire to spend the next twenty-thirty years in prison. You should also stay as far away from the narcotics as you can. Any of it. The rules for this are very strict and the ... Open »

Cityguide on traditions, mentality and lifestyle of people in Krabi. Learn the best periods to visit Krabi to discover its soul - authentic festivals, events and celebrations. We will also reveal the interesting habits, attitude towards the world and to tourists in Krabi.