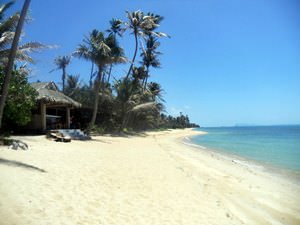 Going to Ko Pha Ngan, you shouldn’t forget that locals are not Europeans and they have many special traditions and customs. Some of them are quite different from the usual traditions in Western culture. In general, locals in resort areas are accustomed to the "strange" behaviour of tourists, which are often called «farang». But there is no special tolerance for non-compliance with Thai traditions in more remote settlements. For example, there is absolutely not acceptable to go in open clothes anywhere except on the beach. It is not only about bathing suits, but also about the absence of a shirt or too short shorts. Moreover, local residents will clearly show condemnation towards everyone who does not comply with this rule.
Cuisine of Ko Pha Ngan Island for gourmet with top restaurants and cafe
Many tourists, deciding to visit a local cafe or restaurant are waiting for exotic dishes such as fried beetles or cockroaches, as well as spicy dishes. Of course, the island's cuisine is …

Open
In general, the islanders are characterized by a commitment to certain conventions in clothing, which is typical for Italians. A local resident would never go to a restaurant without an evening dress, you will never see him without a business suit in the office. Thai people never walk in the park in a dinner jacket. Locals greet each other not only with words but also using a special wai gesture. You should place hands together in prayer and raise upwards towards the face, lower your head in a slight bow and lower your eyes. This gesture is never used when addressing children. It is polite to address to adults with the word pee and to children with the word – nong.
You may find yourself surrounded by continuously smiling Thais during your holidays on Ko Pha Ngan. A smile is a mandatory attribute of communication for local residents, independently of their emotions and mood. They believe that by sharing a smile with other people, they become happier and expect smiles from the interlocutor. Note that it is not common to raise voice during a conversation and gesticulate rapidly. When communicating with locals remember that although almost all of the local people are adherents of Buddhism, they are incredibly superstitious. Copyright www.orangesmile.com
Excursion over cultural sights of Ko Pha Ngan Island - 'must visit' points of interest
Ko Pha Ngan or Pangan is one of the most visited Thai Islands. It is the second island in size after Koh Samui, it is well known among tourists and bears the title "Asian Ibiza". Despite all …

Open
For example, the right side of the island is considered to be more important, and a man always sleeps in the bed to the right of the wife, and the wife never gets in public on the right side of the husband. People give and get things with the right hand because the left one is considered to be «unclean». It is very unacceptable to touch someone else's head, which stores the soul of people here, as well as to direct your feet to people, which are also considered "unclean". You should never try to climb on the Buddha statues located on the island or do anything with them. You will definitely get a fine for vandalism here. 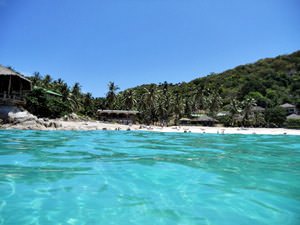 But you can get a more severe punishment for insulting the king. It seems that a usual tourist can’t insult the royal person but it is important to understand that some actions with the image of the king are equal to the insult of the ruling dynasty. For example, if you accidentally step on the local banknotes, which depict the head of the king, you may go to jail. Locals highly respect the monarch, there is a translation of the anthem on the radio every day at 8 a.m and 6 p.m. During the melody, people freeze in place as a sign of respect. Also, you shouldn’t buy drugs, which are often offered at large parties on the island. There are usually police in civilian clothes. The status of a foreigner won’ t help you here.
Your active city break in Ko Pha Ngan Island. Attractions, recreation and entertainment - best places to spend your day and night here
One of the most interesting places for active tourists on Ko Pha Ngan is the Than Sadet National Park, located in the vicinity of the Royal River. The river was named so because the king of …

Open
Remember that an empty plate means disrespect for the culinary talents of the master of the house on Ko Pha Ngan, but it doesn’t mean that the guest is still hungry. Locals are very hospitable and they can put food on your plate until the food will not remain on the plate because you are full. When visiting local Buddhist monasteries, remember that it is forbidden for women to touch monks and talk to them. You can ask a man to sacrifice on the altar or put a gift on the edge of the cushion. People on Ko Pha Ngan have large-scale celebrations on major holidays such as New year, Chinese New year, April's Thai New Year and the Day of the ruling dynasty, the Day of the Coronation, the Queen's birthday, Constitution Day, the Day of the king. There is celebrated Loi Krathong on a full moon night in November. Its name can be translated as «to float a basket». Krathong is a basket made of banana leaves or bread, decorated with flowers. On the night of the full moon, Thais launch their krathong on a river, making a wish. Yi Peng is an amazing festival of sky lanterns.

This guide to traditions and festivals in Ko Pha Ngan Island is protected by the copyright law. You can re-publish this content with mandatory attribution: direct and active hyperlink to www.orangesmile.com.
Ko Pha Ngan Island - guide chapters 1 2 3 4 5 6 7 8 9

Traditions and festivals in cities around Ko Pha Ngan Island

Ko Samui
Another ethnic treasure of the island of Kho Samui is considered to be hevea milk juice which is known among tourists under another name being latex. Goods made of genuine latex which are produced on local plants and factories feature high quality and are exported to various countries of the world. A choice of goods produced on local factories is really vast and encompasses car ... Open »
Ko Tao Island
When you are going to Ko Tao, pay attention to some peculiarities of Thai mentality and laws. The most important thing is on any circumstances not to offend the royal family. That, if you don’t have any desire to spend the next twenty-thirty years in prison. You should also stay as far away from the narcotics as you can. Any of it. The rules for this are very strict and the ... Open »
Krabi
The cultural life of Krabi is full of interesting holidays and festivals. One of the most interesting national celebrations is Loy Krathong festival, the All Souls' Day. They celebrate it according to the lunar calendar, so every year the date of the holiday changes. Despite the fact that the event is quite serious, it is accompanied by a number of interesting rituals, which ... Open »
Ko Lanta Island
It might be a surprise to find out that people on Ko Lanta Island actually have high moral principles, even though Thailand is famous for its parties and positive attitude to transsexuals. There are no nude beaches on the island, so if you’ll try to sunbathe naked or topless, then stricken people will call the police and you’ll be fined. The locals are known for their ... Open »
Ko Lanta
You will constantly notice that everyone around you is smiling while walking around the Old Town. This often seems deliberate and inappropriate. However, such traditions are in Thailand. It is believed that everyone gets a smile in return by sharing his smile with everyone around him. Luck, energy, and good mood come along with smiles. Therefore, even if the Thai is not doing ... Open »
Phuket
Commonly the date of the celebration falls within mid of April matching with another local holiday named the Water Festival which main feature is spilling the water. This exciting fest engages the local youth splashing water in the streets. The ritual symbolizes an act of purification before a new year starts. Seafood fans should visit Phuket in May as the Seafood Festival ... Open »