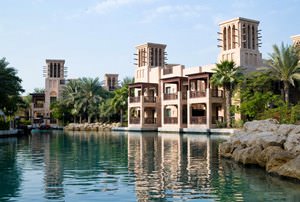 Besides numerous entertaining and shopping centers, the area of Jumeirah is rich in unique landmarks. Old Iranian Mosque is the most famous place of interest in Jumeirah. The old building of the hospital, which is located opposite the mosque, is also very famous. Both the landmarks were built centuries ago. The façade of the mosque is decorated with the skillfully made mosaic in blue and green shades. Such a mosaic was typical for all Persian buildings of past centuries. Only Muslim people are allowed to enter the mosque, but the outer look of the building is no less amazing than its inner décor.
Guide to Jumeirah sightseeing - things to see and to visit
Jumeirah archipelago, which is located in Dubai region, consists of three islands – the Palm Jebel Ali, the Palm Jumeirah and the Palm Deira. These are artificial islands, the building of …

Open
Despite the fact that Jumeirah is the most modern area in Dubai, it is not deprived of archaeological landmarks. Scientists keep working in a part of the neighborhood and keep finding priceless artifacts. A significant part of the excavated items belongs to the pre-Islamic era. Everyone is welcome to see the collection of the archaeological artifacts found in Jumeirah in «Heritage & Diving Village» museum. Tourists are not allowed to enter the territory of the excavations, but visitors can see archaeologists at work from a distance.
Jumeirah Mosque is an important religious landmark of the neighborhood. It is also considered one of the most beautiful mosques in Dubai. A team of modern architects developed the design of this mosque, but it still looks like a fabulous medieval palace. The mosque was built in accordance with the best traditions of Islamic architecture, and that fact differs it from other religious buildings of our days. Excursion groups are allowed to enter this mosque, so tourists have an opportunity to see how the gorgeous landmark looks like inside. Afternoon and evening excursions are particularly popular as the mosque has an eye-catching illumination system. Copyright www.orangesmile.com
Cuisine of Jumeirah for gourmet with top restaurants and cafe
Numerous restaurants and cafes in Jumeirah are always ready to welcome their guests. Many popular dining establishments are open in large shopping centers and hotels. For example, The Alamo …

Open
Out of other architectural landmarks of the area, it is important to mention Majlis Ghorfat Um-al-Sheef. This beautiful building is made of coral blocks. Many years ago, it belonged to a sheikh. After a thorough restoration, the palace was finally open to the general public. Nowadays, everyone is welcome to see the palace, walk in its magnificent rooms, and even relax in the Majlis hall where the sheikh received callers in the past. The old palace is surrounded by a lush garden with numerous fountains and beautiful statues. It is an ideal place for a stroll as the garden protects from the scorching heat. There is also a café where visitors can purchase refreshing drinks.

In the section below, you can get one of our excursion, activities or city discovery tours over Jumeirah and surroundings. Our website offers 10-30% lower ticket prices, when compared to the offline purchase on the spot.

City tours, excursions and tickets in Jumeirah and surroundings

This guide to cultural sights Jumeirah is protected by the copyright law. You can re-publish this content with mandatory attribution: direct and active hyperlink to www.orangesmile.com.
Jumeirah - guide chapters 1 2 3 4 5 6 7 8
Reference information
Map of all art museums

Art galleries in Jumeirah and around
♥   Art museum 'Salsali Private Museum' Dubai, 7.9 km from the center. On the map

Unique spots in Jumeirah and near 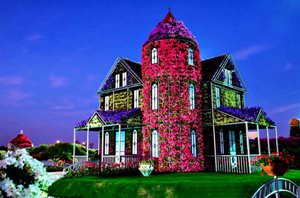 Distance from Jumeirah center - 16.7 km.
The bulk of the flowers that adorn the facade are petunias. They are known for impressive appearance. In addition, these popular flowers need less care than exotic plants. In total, more than 45 million flowers are planted in the vast park every year. The best landscape designers of the world are working on the design of the green zone. Travellers who come to see a beautiful green house in the Miracle Garden have to note that it is open for visits during the period from October to May. … Read further 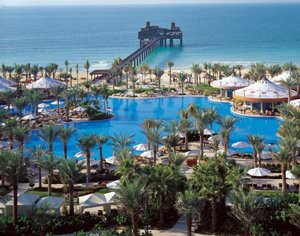 Distance from Jumeirah center - 10.9 km.
It is no accident that Al Qasr Hotel is popular with newlyweds, some of the terraces at the pool are specially equipped for solemn ceremonies, including wedding. The pool is so big that vacationists are offered to ride it on a boat. With the onset of the darkness the pool and the water channels look especially inimitable as they are decorated with spectacular artistic illumination. … Read further 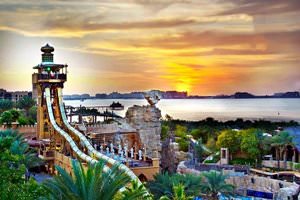 Distance from Jumeirah center - 10 km.
Dubai waterpark has another amazing feature; it is thematic. Its design is largely devoted to stories about the famous Sinbad the Sailor. You will notice numerous unique sculptures and installations there. In total, there are more than 20 incredible rides, including the world-famous Master Blaster slides, Lazy River and Juha Journey, Burj Surj and Tantrum Alley rides, as well as extreme Tunnel of Doom that requires the special courage to try. … Read further

Photogallery of cultural heritage of Jumeirah

Excursions over cultural sights of neighbours of Jumeirah

Dubai
Some old mansions are decorated with wind towers. These are interesting constructions that were used to determine the direction and strength of wind several centuries ago. Dubai Museum on Al-Fahidi Street is a great way to learn about the history of the city. The museum is located in al-Fahidi Fort. Its walls are the location of most varied collections, starting from antique ... Open »
Sharjah
Sharjah is sure to be the cultural capital of the Arab world, as an incredible number of unique attractions is concentrated in the emirate. The oldest area of ​​the emirate is Merijah; its main landmark is the Sharjah Archaeology Museum. Excavations in the Sharjah have being conducted since 1970; much of the artifacts discovered by scientists are represented in the museum. ... Open »
Ajman
Ajman has enough attractions to plan an interesting excursion program. Ajman Fort is the main historic landmark of the emirate. It was built in the 18th century as the emir’s residence. The fort served its purpose until 1967, after which it was transformed into a police station. Barracks for police officers were opened in the historic building, but recently the fort has ... Open »
Ras al Khaimah
One of the unusual and attractive cultural sites is the Museum and the Center of Ahmed bin Majid called after the great navigator. Exhibits of the museum are dedicated to discoveries of the great traveler and to the history of the fishery development. Exhibits of the museum include old devices used by pearl catchers and local anglers hundreds of years ago. Some of the most ... Open »
Abu Dhabi
Abu Dhabi is one of the world's largest oil production centers. There is an oil exhibition near National University. The exhibition is devoted to the development of the industry. Travellers are also recommended to visit Historical Museum, the exhibition of which includes ancient manuscripts and documents older than one hundred years. Tourists with children should definitely ... Open »
Muscat
Ancient castles and fortresses are among the most significant touristic spots of the city. The ancient Al Jalali Fort and the Al-Mirani Fort are located not far from the Palace. Two upscale buildings are set close to each other. Now they are reequipped into the Historical Museum. After estimating the appearance of the ancient forts the travelers may look inside the forts and ... Open »

Culture guide to Jumeirah. Which fascinating sights to visit once you are in Jumeirah: temples, churches, museums, theaters and castles. Recommendations (with addresses, phone numbers and links) on the places 'must visit' in Jumeirah. Plan your own city excursion by using this page info!