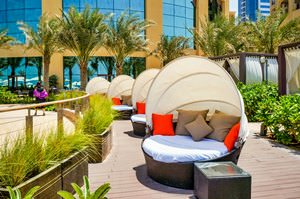 Ajman has enough attractions to plan an interesting excursion program. Ajman Fort is the main historic landmark of the emirate. It was built in the 18th century as the emir’s residence. The fort served its purpose until 1967, after which it was transformed into a police station. Barracks for police officers were opened in the historic building, but recently the fort has officially become a historic landmark. It was restored, and a museum was opened in it. Today, the Ajman Museum has the biggest and the most diverse collection in the emirate.
Guide to Ajman sightseeing - things to see and to visit
The city of Ajman is located approximately 10 kilometers from Sharjah. This is quite a calm and “modest” settlement. It is often considered the poorest region in the UAE. The …

Open
A collection of archaeological findings is the most interesting part of the museum. Many artifacts were discovered during the renovation works in the fort. You will have an opportunity to see old manuscripts, medieval weapons, and household items that local people were using centuries ago. A separate hall hosts an exhibition dedicated to local police.
The Red Fort is a newer historical attraction – it was built in the first half of the 19th century. The name of the fort reveals its main peculiarity. The façade of the building is covered with the plaster of an unusual terracotta color. The architectural complex consists of three guardian towers connected by galleries. Two of these towers were built in the 19th century, and the third one was added in 1986. The complex has one more interesting feature – it has elements of décor made from precious sandalwood delivered from India by sea. Many elements of the original design have survived to modern times. A beautiful garden with lush vegetation surrounds the fort. It is pleasant to walk here even on hot days. Copyright www.orangesmile.com
Family holidays with kids in Ajman. How to entertain your child, things to show to children.
Ajman is one of the most attractive destinations for vacationers with children in the United Arab Emirates because of numerous entertainment centers and opportunities for family recreation. …

Open
Dhow boats remain among the most iconic historic symbols of Ajman. Local people started building these vessels centuries ago. Just like before, Dhow boats are made from teak wood. There is a large boat building facility in the nearest suburb of the city. An excursion to the ship-yard is an interesting activity as you can see professional masters at work. Local people keep using dhows. They cherish their invention so much that they have even installed a monument dedicated to the dhow boat on the waterfront. 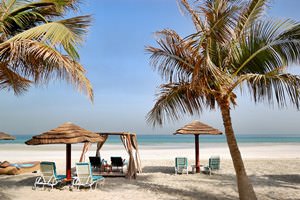 If you like exploring historic areas, do not miss an opportunity to visit Mowaihat. This archaeological site is located in the nearest suburb of Ajman. The important attraction was discovered in the 80s of the previous century. Scientists managed to restore several old buildings, and now the territory of the area is open for excursions. You will see fragments of old tombs and shrines, and will find out what precious archaeological artifacts were discovered in this area.
Your active city break in Ajman. Attractions, recreation and entertainment - best places to spend your day and night here
Tourists can enjoy interesting activities in Ajman. Beach recreation should be an essential part of a vacation here. Ajman beaches are comfortable and have a well-developed infrastructure. …

Open
Hassa Buweid Castle is an interesting historic attraction that is less mainstream and is not mentioned in many travel guides. Located at a distance from the major tourist sites, Hassa Buweid is the smallest of the three castles that have remained in the emirate. Nevertheless, the castle is in great condition although it was built more than a century ago. The construction works took place in the second half of the 19th century. Hassa Buweid stands on the top of a hill, so you can admire surroundings and excellent marine views during an excursion here. The fortress has two halls that are open for visitors. They exhibit collections of interesting historic artifacts. 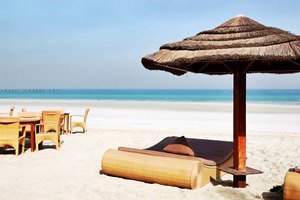 The main religious landmark is located in the capital of the emirate. Sheikh Rashed Bin Humaid Al Nuaimi Mosque is a classical architectural attraction in Arabian style. Beautiful cream-colored stones were used in the building of the mosque. The stones change their shade under sunrays depending on the time of the day. Many people come to see the mosque at sunset because it looks the most impressive at this time. Skillfully made carved ornaments decorate the façade and minarets. Note that only Muslims are allowed to enter the mosque.
Shopping in Ajman - main shopping streets, outlets and boutiques
Colorful markets and malls in Ajman are great destinations for shopping in this emirate. Foreign tourists usually want to purchase locally produced goods. Only some people arrive here to …

Open
Everyone else can admire the outer design of the shrine and take memorable pictures. The mosque is very big – it occupies an area of roughly 20,000 square meters. There is a spacious square with benches in front of it. Everyone can relax here. During a walk on the waterfront, don’t forget to see the old watchtower that was built approximately 150 years ago. Despite the fact that the tower doesn’t serve its purpose anymore, it was decided not to demolish it. The façade of the tower is covered with beautiful coral-colored stones.

In the section below, you can get one of our excursion, activities or city discovery tours over Ajman and surroundings. Our website offers 10-30% lower ticket prices, when compared to the offline purchase on the spot.

City tours, excursions and tickets in Ajman and surroundings

This guide to cultural sights Ajman is protected by the copyright law. You can re-publish this content with mandatory attribution: direct and active hyperlink to www.orangesmile.com.
Ajman - guide chapters 1 2 3 4 5
Reference information
Map of all art museums

Art galleries in Ajman and around
♥   Art museum 'Sharjah Art Museum' Sharjah, 13.6 km from the center. On the map

Photogallery of cultural heritage of Ajman

Excursions over cultural sights of neighbours of Ajman

Sharjah
Sharjah is sure to be the cultural capital of the Arab world, as an incredible number of unique attractions is concentrated in the emirate. The oldest area of ​​the emirate is Merijah; its main landmark is the Sharjah Archaeology Museum. Excavations in the Sharjah have being conducted since 1970; much of the artifacts discovered by scientists are represented in the museum. ... Open »
Dubai
Grand Mosque is without a doubt among the most interesting religious sites of the city. The spacious hall of the mosque can accommodate up to 1200 visitors at one time. This is a massive and beautiful structure, which is distinguished by its unique architectural shape and interesting internal structure. Shindaga Tower is one more important architectural object. The tower was ... Open »
Jumeirah
Besides numerous entertaining and shopping centers, the area of Jumeirah is rich in unique landmarks. Old Iranian Mosque is the most famous place of interest in Jumeirah. The old building of the hospital, which is located opposite the mosque, is also very famous. Both the landmarks were built centuries ago. The façade of the mosque is decorated with the skillfully made mosaic ... Open »
Ras al Khaimah
Tour enthusiasts who choose Ras al-Khaimah for their recreation have an opportunity to visit a lot of interesting natural and historical attractions. On the territory of the emirate, there is the Canyon of Hadzharsky Mountains that resembles a huge oasis surrounded by desert landscapes. In the canyon, stones that are subsequently used for the modern building construction in the ... Open »
Abu Dhabi
Abu Dhabi is a beautiful modern city that never ceases to amaze its visitors by the beautiful parks, skyscrapers, and fabulous mansions. The most beautiful villas and palaces are located close to the waterfront. You will find luxury shopping malls, entertainment centers and restaurants there. In the city’s suburbs you will find beautiful old mosques, beautiful Al Hosn Palace ... Open »
Muscat
Tourists travelling with families will love the Children’s Museum. It offers the visitors the achievements of modern science and technology. The visitors may explore the collection of original showpieces and take part in exciting experiments. The city of Muscat is famous for its natural attractions, the most popular of which is the Wadi Shab. An oasis of ultimate beauty ... Open »

Culture guide to Ajman. Which fascinating sights to visit once you are in Ajman: temples, churches, museums, theaters and castles. Recommendations (with addresses, phone numbers and links) on the places 'must visit' in Ajman. Plan your own city excursion by using this page info!