Sightseeing in Abu Dhabi - what to see. Complete travel guide 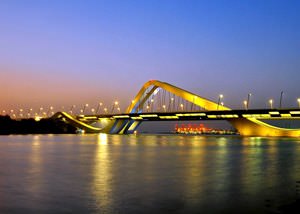 1761 can be considered the official date of the city foundation. In this year a source of the fresh water was discovered, and people from Bani Yas tribe created a protective fort around it. The spring attracted more and more people and soon a small village was created around it. All inhabitants protected the spring as water meant life. Village people earned for living mostly by procuring peals and fishing. Years passed, but they didn’t cause any serious changes in the lifestyle of the village people until a valuable deposit was discovered not far from Ras Sadr in 1958. However, this time this wasn’t a source of fresh water, but an oil field.
Top places to stay in Abu Dhabi - most luxurious hotels
A selection of luxury hotels in Abu Dhabi is very large, and there are some confident leaders, which are in demand among wealthy guests of the emirate. The luxury hotel Grand Millennium Al …

Open
This deposit was one of the richest and brought large revenues to the city. Today Abu Dhabi is the capital of the wealthiest emirate, a modern megalopolis and an internationally famous tourist destination.
The city’s center is full of mosques and the embankment is decorated with beautiful fountains, the names of which are as refined and pompous, as their look. Modern Abu Dhabi resembles a mirage as the contrast between endless golden desert sands and hi-tech skyscrapers surrounded by green gardens is really striking. In spite of the grandness of modern buildings, you will find historic places of interest, for example, the ancient Al Husn fortress. Abu Dhabi is a unique city, in which the most technically sophisticated skyscrapers neighbor with ancient houses built 3 hundred years ago. One of the city’s peculiarities is in amazing parks that occupy all free space of this city. Here the choice of plants is really big and you can see different types of palms, decorative shrubbery or walk on the crisp carpet of fresh green grass. Copyright www.orangesmile.com
Best hotel choice for romantic escape, wedding or honeymoon in Abu Dhabi
The fashionable Royal Rose Hotel deserves special attention among romantic hotels in Abu Dhabi. It’s located in the unique building, the French-styled luxurious palace of the 17th …

Open
The eastern part of the emirate is considered the historical district. Here are located the most famous sights of the city: Museum of Al-Ain, Jebel Hafeet mountain, Hale Park, a huge zoo, Ayn Fayyad Park and the National University. 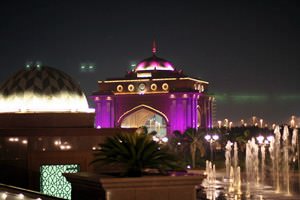 One of the main symbols of the city is considered to be the Sheikh Zayed Mosque, also known as the White Mosque. This particular building amazes with its scale and incredible beauty; around the mosque is a huge square, laid out of marble of various colours. The mosque can host up to 40,000 believers at once, and is considered one of the most luxuriously decorated mosques in the world. Not only selected species of marble and precious metals, but also rare stones were used for interior decoration. Within the walls of the mosque are hidden numerous interesting artefacts, including the world's largest carpet and the most expensive chandelier, diameter of which reaches 10 meters.
Shopping in Abu Dhabi - main shopping streets, outlets and boutiques
Abu Dhabi is famous for its huge shopping complexes. One of the most popular is Abu Dhabi Mall. Its opening took place in 2001. Nowadays, it houses 220 shops, and more than 40 restaurants …

Open
The ethnographic museum "Heritage Village" will be an ideal place to explore the culture and traditions of local residents. It is stylized as a classical Bedouin settlement, with several tents set up on site of the museum, inside of which are hidden curious artefacts. On the territory of the museum there are several intriguing workshops, where you can observe the manufacture of household items, fascinating souvenirs and jewellery. Tourists with limited funds will be pleased to learn that this museum is free to visit.

This guide to iconic landmarks and sights of Abu Dhabi is protected by the copyright law. You can re-publish this content with mandatory attribution: direct and active hyperlink to www.orangesmile.com.
Abu Dhabi - guide chapters 1 2 3 4 5 6 7 8 9 10 11 12 13 14

City tours, excursions and tickets in Abu Dhabi and surroundings

Art galleries in Abu Dhabi and around
♥   Art museum 'Guggenheim Abu Dhabi' Abu Dhabi, 8.7 km from the center. On the map

Sights around Abu Dhabi from our guide 'Extreme places on Earth' 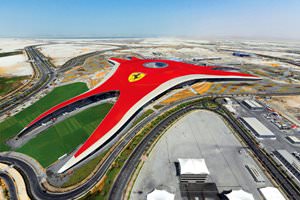 Distance from Abu Dhabi center - 24.4 km.
In addition to the attractions, the covered park has a trading gallery where guests can buy souvenirs or order exclusive gifts. In the park there are the first class restaurants of Italian and international cuisine, as well as the excellent cinema, so you can relax here all day. Ferrari World is the largest covered entertainment park in the world. Its surface area is 86 sqkm. The surface of the pavilion is much larger and is 200 sq km. You can even see it from the cosmos. … Read further 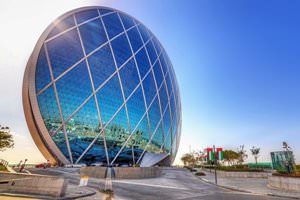 Distance from Abu Dhabi center - 21.3 km.
Approximately more than 270 million USA dollars were spent for the skyscraper building. Today Headquarters of Aldar is open for tourists. The top floor has several great restaurants and a small hotel. The main peculiarity of the hotel rooms is large floor-to-ceiling windows. From them opens a great panorama view on the Persian Gulf. The most extraordinary this building looks in the evening when it is decorated with a bright lightning. … Read further 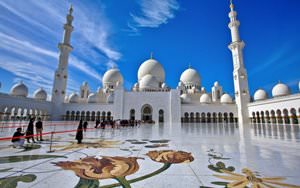 Distance from Abu Dhabi center - 12.4 km.
Literally the whole world participated in construction and design of this incredibly wonderful mosque. The best architects from the United States took part in the process. The marble for the construction was supplied by China and Italy. Luxurious trim parts were manufactured in Austria and Germany. Unlike many other mosques, Sheikh Zayed Grand Mosque is open for free visits. All guests can take a walk through its halls, enjoy pleasant coolness in the heat of the day and admire the artistic design. It s a great experience to visit a mosque in the evening, when its facade and rooms are lit with artistic illuminations. … Read further

Search touristic sites on the map of Abu Dhabi

Sightseeing in regions nearby Abu Dhabi

Abu Dhabi Region
Fans of educational tours and exhibitions should definitely look into the Abu Dhabi Cultural Centre arranging a variety of activities. There are art exhibitions and presentations, as well as events devoted to national culture. Heritage Village is located next to the center. It will allow learning many interesting things about life and traditions of locals. This picturesque ... Open »
Jumeirah
«7-star» hotel Burj Al Arab is considered the most expensive one in the world. We should also mention Royal Mirage and Madinat Jumeirah hotels. A beautiful boulevard called “Golden Mile” is built on the Palm Jumeirah. It is a home to multiple restaurants, shops and residences. The building of the monorail road that starts near Atlantis Bay hotel and ends in Gateway ... Open »
Dubai
Dubai is a true paradise for shoppers, because you will not find such number of markets in any other emirate. Trading outlets and shops occupy a whole quarter that is called Deira. Here are located a fruit market Fruit Souk, a fish market Fish Market, trading rows with jewelry Gold Souk and a spice market Spice Souk. The main part of buildings in Dubai form modern business ... Open »
Sharjah
The ancient buildings are carefully restored. One can’t simply fail to visit local coral exhibitions. Besides this, Ajman Fort is the location of a museum, which exhibits wonderful relics of the past. Beautiful and modern hotels in Sharjah simply do not require any advertising. You will not find better service in this region, perhaps, even in Europe. The modern exhibition ... Open »
Dubai Region
Among historical attractions, Al Fahidi Fort is one of the most famous. Today, this large-scale historic structure has turned into an interesting museum complex. In the courtyard of the fort there are several reed huts, those are typical houses of locals that could be seen at these places a hundred years ago. The interior typical for local villages of the 19th century was fully ... Open »
Ajman
The city of Ajman is located approximately 10 kilometers from Sharjah. This is quite a calm and “modest” settlement. It is often considered the poorest region in the UAE. The city’s territory is also much smaller compared to other cities of the country. Nevertheless, this is a great vacation destination with beautiful nature and a tranquil atmosphere. Fantastic beaches ... Open »

All about Abu Dhabi, United Arab Emirates - sightseeings, attractions, touristic spots, architecture, history, culture and cuisine. Prepare your trip together with OrangeSmile.com - find out the 'must see' things in Abu Dhabi, which places to visit, which excursions to take, where the breathtaking views are waiting for you. Planning your trip with this travel guide will help your to get the most out of Abu Dhabi in few days.